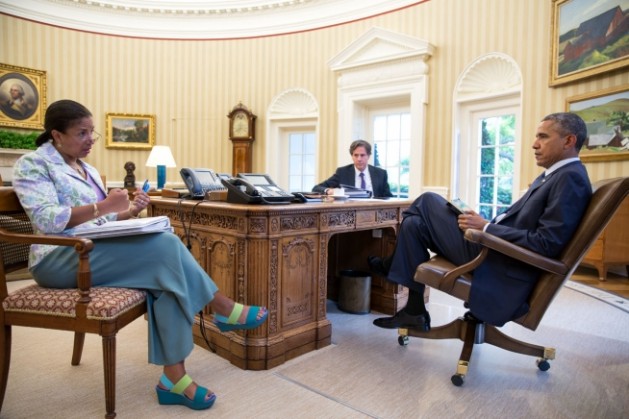 WASHINGTON, Aug 23 2014 (IPS) - This week’s video-taped beheading of a U.S. journalist by the Islamic State of Iraq and al-Sham (ISIS) has spurred renewed calls for President Barack Obama to broaden Washington’s military efforts to strike the terrorist group, including in Syria.

While Obama himself has long resisted pressure from neo-conservatives and other hawks to intervene more directly in Syria’s civil war, senior administration officials suggested strongly in the wake of ISIS’s grisly execution of James Foley that expanding U.S. military intervention across the border was indeed on the table.

The administration’s strategy will depend on co-operation from Sunni-led Gulf states, especially Saudi Arabia, which have withheld support from Iraq under Maliki.

The most pointed remark in that regard came from the chairman of the Joint Chiefs of Staff, Gen. Martin Dempsey, who until now has been considered one of the strongest opponents of any expanded U.S. military role in the region, particularly in Syria where ISIS has emerged as the strongest among the rebel groups fighting the regime of President Bashar al-Assad.

“To your question, can they be defeated without addressing that part of their organisation which resides in Syria,” Dempsey said in answer to a reporter’s question, “the answer is no. That will have to be addressed on both sides of what is essentially at this point a non-existent border.”

Asked whether the Pentagon was indeed considering striking ISIS in Syria, Defence Secretary Chuck Hagel, who described the group’s potency as “beyond anything that we have seen” and a “long-term threat” to the U.S., said simply, “We’re looking at all options.”

Similarly, in a briefing with reporters in Martha’s Vineyard, Massachusetts, where Obama is currently vacationing, his deputy national security adviser, Ben Rhodes echoed that position.

“We’re actively considering what is necessary to deal with that threat, and we’re not going to be restricted by borders,” he said, noting that the beheading was considered by the administration to constitute a “terrorist attack against our country. …If you come after Americans, we’re going to come after you wherever you are.”

The tougher line on ISIS, whose sweep from bases in eastern Syria and al-Anbar province in western Iraq through much of northern and central Iraq in June and subsequent advances into Kurdish-controlled territory earlier this month stunned officials here, comes in the wake of some progress by the administration in addressing the crisis.

On the military front, the nearly 100 U.S. airstrikes, which were carried out over the past week in co-ordination with Kurdish pesh merga and U.S.-trained Iraqi special forces, appear to have succeeded in pushing back ISIS forces from much territory they had gained in the Kurdish region and in depriving the militants of their control of the huge Mosul dam.

On the political front, the resignation of Prime Minister Nouri al-Maliki and his replacement by Haider al-Abadi broke a long-standing deadlock in Baghdad and, at least theoretically, opened the door to the formation of a less sectarian government in which the minority Sunni and Kurdish communities will gain a real share of power.

The administration clearly hopes that such an outcome will persuade many Sunnis – including mainly secular former Baathist officials and military officers – who have been allied with ISIS in the latter’s campaign against Maliki to break the militants, much as they did against ISIS’s predecessor, Al Qaeda in Iraq (AQI), during the so-called “Anbar Awakening” movement in 2006-7.

“Baathists want the ouster of Maliki to regain some of the stature and political participation that they’ve been denied since the fall of Saddam Hussein,” Human Rights Watch Iraq specialist Letta Tayler told foreignpolicy.com. “And that’s a very different goal from setting up a caliphate…”

Of course, the likelihood that such an outcome can be achieved will depend heavily on the cooperation – or at least acquiescence – of other key external players besides the U.S., of which Iran is considered the most important given its influence with the various Shia parties that have dominated Iraq’s government since the 2003 U.S. invasion.

In addition to Iran, however, the administration’s strategy will depend on co-operation from Sunni-led Gulf states, especially Saudi Arabia, which have withheld support from Iraq under Maliki and largely failed to vigorously enforce laws and international sanctions against those of its citizens who have provided financial and other support to Al Qaeda, its affiliates, and, more recently, ISIS.

Washington has been encouraged by the favourable reaction to Abadi’s appointment from King Abdullah of Saudi Arabia — who, like Jordan’s king, appears increasingly alarmed by ISIS’s expansion — and hopes it will be followed by efforts to persuade key Sunni tribes in Iraq to break with the militants and participate in a new government in Baghdad.

Much the same approach applies to its strategy against ISIS in Syria, where it faces a much trickier situation given U.S. opposition to the Assad regime, whose forces, however, are increasingly seen here as the only significant barrier to ISIS’s expansion there.

Western-backed “moderate” rebels of the Free Syrian Army (FSA) have steadily lost ground to both government forces and to ISIS, as well as other “jihadi” groups, over the past year and have become increasingly marginal to the conflict.

While Obama last month pledged 500 million dollars in new assistance, including military aid, for the FSA to fight both the regime and the jihadi groups, officials have said the vetting and training of new fighters will take many months to complete and, even then, is unlikely to be able to be able to tilt the battlefield in any substantial way for the foreseeable future, if at all.

Thus, the primary battlefield beneficiary of U.S. strikes against ISIS in Syria is likely to be Assad, a prospect that cannot please Sunni-led allies, including Saudi Arabia and Turkey, which, despite their new concerns about the threat posed by ISIS, have invested heavily in the Syrian president’s ouster.

Nonetheless, the administration is likely to push hard on its allies to co-operate in weakening ISIS in Syria, as well as Iraq, mainly by cutting off private external funding of the group and sealing porous borders that have been used to infiltrate ISIS fighters and recruits into Syria.

To gain their co-operation, Obama may have to offer key concessions, such as accelerating aid and supplying more advanced weaponry to non-jihadi groups, and supplying additional guarantees to Gulf states that feel threatened by any rapprochement between Washington and Tehran.

To defeat ISIS, according to Dempsey, military means will not be sufficient. “(It) will come when we have a coalition in the region that takes on the task of defeating ISIS over time.

“It requires a variety of instruments, only one small part of which is airstrikes,” he said. “I’m not predicting those will occur in Syria, at least not by the United States of America. But it requires the application of all the tools of national power – diplomatic, economic, information, military.”