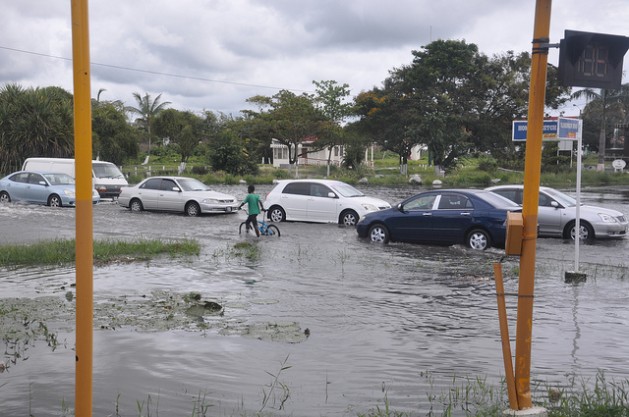 A boy walks his bicycle down a flooded street in Georgetown, Guyana. Credit: Desmond Brown/IPS

“It’s not on the final declaration called the outcome document,” a SIDS diplomat told IPS.

"It's clear that governments have an obligation to reduce the risk of climate-related disasters, and displaced individuals and communities should be provided legal protection in their countries and abroad." -- Kristin Casper of Greenpeace

The rich countries that neighbour small island states are not in favour of a flood of refugees inundating them, he added.

Such a proposal also involves an amendment to the 1951 U.N. Convention on the Status of Refugees, making it even more divisive.

The outcome document, already agreed upon at a U.N. Preparatory Committee meeting last month, will be adopted at the Sep. 1-4 meeting in the Samoan capital of Apia.

Sara Shaw, climate justice and energy coordinator at Friends of the Earth International (FoEI), told IPS, “We believe that climate refugees have a legitimate claim for asylum and should be recognised under the U.N. refugee convention and offered international protection.”

Unfortunately, she said, the very developed nations responsible for the vast majority of the climate-changing gases present in the atmosphere today are those refusing to extend the refugee convention to include climate refugees.

The world’s first-ever “climate change refugee” claimant, a national of Kiribati, lost his asylum appeal in a New Zealand courtroom last May on the ground that international refugee law does not recognise global warming and rising sea levels as a valid basis for asylum status.

Ioane Teitiota, a 37-year-old native of the Pacific island nation, claimed his island home was sinking – and that he was seeking greener and safer pastures overseas.

But the New Zealand court ruled that the 1951 international convention on refugees, which never foresaw the phenomenon of climate change, permits refugee status only if one “has a well-founded fear of persecution because of his/her race, religion, nationality, membership in a particular social group or political opinion.”

The U.N.’s electronic newsletter, U.N. Daily News, quoted Francois Crepeau, the special rapporteur on the human rights of migrants, as saying, “We don’t have, in international law, or any kind of mechanisms to allow people to enter a State against the will of the State, unless they are refugees.”

And even then, he said, they don’t technically have the right to enter, but cannot be punished for entering.

Addressing the General Assembly last September, the Prime Minister of Antigua and Barbuda Winston Baldwin Spencer told delegates, “It is a recognised fact – but it is worth repeating – that small island states contribute the least to the causes of climate change, yet we suffer the most from its effects.”

He said small island states have expressed their “profound disappointment” at the lack of tangible action at U.N. climate change talks.

Developed countries, he said, should shoulder their moral, ethical and historical responsibilities for emitting high levels of anthropogenic greenhouse gases into the atmosphere.

“It is those actions which have put the planet in jeopardy and compromised the well-being of present and future generations,” he said.

Kristin Casper, legal counsel for campaigns and actions at Greenpeace International, told IPS, “It’s a scandal that low-lying coastal and small island developing states stand to lose their territory by the end of this century due to sea level rise.”

She said climate-driven migration will increase, “therefore we salute all efforts by Pacific Small Island Developing States, other governments and non-governmental organisations (NGOs) to call for urgent action to allow the world to fairly deal with climate-forced migration.

“It’s clear that governments have an obligation to reduce the risk of climate-related disasters, and displaced individuals and communities should be provided legal protection in their countries and abroad,” Casper said.

The Samoa conference is officially titled the Third International Conference on SIDS, the last two conferences being held in Barbados in 1994 and Mauritius in 2005.

Addressing reporters last week, the Secretary-General of the Samoa conference Wu Hongbo told reporters he expects over 700 participants, including world political leaders, 21 heads of U.N agencies and over 100 NGOs.

The outcome document, he said, has several recommendations for action on how to move forward. But these goals, he stressed, cannot be achieved by governments alone.

“All of us are affected by climate change,” he said, pointing out that there was a broad agreement among member states on the challenges ahead.

FoEI’s Shaw told IPS millions of people around the world are internally displaced or forced to seek refuge in other countries because of hunger or conflict. Many of these crises are being directly exacerbated by climate change as resources such as fresh water become scarcer and conflicts arise.

“The impacts of climate change, which include increased sea-level rise, droughts, and more frequent extreme weather events, will lead to a growing number of climate refugees around the world,” she warned.

Friends of the Earth would welcome climate refugees being recognised under the U.N. refugee convention and offered international protection, she said.

“However we remain doubtful that these refugees would ever receive a warm welcome from the rich countries whose climate polluting actions forced them from their homes.”

The reality is that the overwhelming majority of climate refugees like those escaping conflict or persecution will end up in other poor countries, whilst rich countries build ever greater walls and fences to keep out those seeking a safer life for their families,
Shaw said.

According to the United Nations, SIDS are located among the most vulnerable regions in the world in terms of the intensity and frequency of natural and environmental disasters and their increasing impact.

These vulnerabilities accentuate other issues facing developing countries in general.