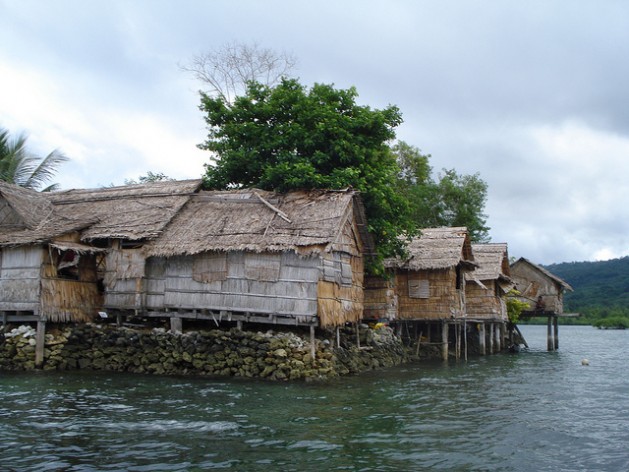 Raolo Island in the Solomon Islands is one of the many places threatened by sea level rise. Credit: Catherine Wilson/IPS

UNITED NATIONS, Aug 11 2014 (IPS) - The world’s 52 small island developing states (SIDS), some in danger of being wiped off the face of the earth because of sea-level rise triggered by climate change, will be the focus of an international conference in the South Pacific island nation of Samoa next month.

Scheduled to take place Sep. 1-2, the conference will provide world leaders with “a first-hand opportunity to experience climate change and poverty challenges of small islands.”

For low-lying atoll nations particularly, the high ratio of coastal area to land mass will make adaptation to climate change a significant challenge.

According to the United Nations, the political leaders are expected to announce “over 200 concrete partnerships” to lift small islanders out of poverty – all of whom are facing rising sea levels, overfishing, and destructive natural events like typhoons and tsunamis.

“We are working with our partners – bilaterally and multilaterally – to help resolve our problems,” said Ambassador Ali’ioaiga Feturi Elisaia, permanent representative of Samoa to the United Nations.

“You don’t have to bring the cheque book to the [negotiating] table,” he added. “It’s partnerships that matter.”

The conference is expected to adopt a plan of action, also called an outcome document, ensuring some of the priorities for SIDS. A preparatory committee, co-chaired by New Zealand and Singapore, has finalised the outcome document which will go before the conference for approval.

These can include limited resources and high population density, which can contribute to overuse and depletion of resources; high dependence on international trade; threatened supply of fresh water; costly public administration and infrastructure; limited institutional capacities; and limited export volumes, which are too small to achieve economies of scale.

The long-term effects of climate change may threaten the very existence and viability of some SIDS, Tan and Taula said in the joint interview. “SIDS are located among the most vulnerable regions in the world in terms of the intensity and frequency of natural and environmental disasters and their increasing impact. And they face disproportionately high economic, social and environmental consequences when disasters occur.”

Asked how many SIDS have been identified by the U.N. as in danger of being wiped off the face of the earth, they said no such assessment has yet been undertaken.

However, the Intergovernmental Panel on Climate Change (IPCC) recently released its fifth assessment report (AR5), and its Working Group II has recently issued its contribution to that, on ‘Climate Change 2014: Impacts, Adaptation, and Vulnerability’.

The report warned that small islands in general are at risk of loss of livelihoods, coastal settlements, infrastructure, ecosystem services, and economic stability.

For low-lying atoll nations particularly, the high ratio of coastal area to land mass will make adaptation to climate change a significant challenge.

Some small island states are expected to face severe impacts such as submergence, coastal flooding, and coastal erosion, the report added. These could have damage and adaptation costs of several percentage points of gross domestic product (GDP).

The report notes the risk of death, injury, ill-health, or disrupted livelihoods in low-lying coastal zones in small islands.

However, the WGII report also notes that significant potential exists for adaptation in islands, but additional external resources and technologies will enhance response.

Asked if there will be a plan of action adopted in Samoa, they said the outcome document will highlight the challenges that SIDS face and actions that SIDS and their partners will take to address these challenges.

As host, Samoa has made it clear that “no partnership is too small to count but what is essential is that they have clear targets, outputs, planned outcomes and timelines.”

Meanwhile, Afu Billy, capacity building volunteer at Development Services Exchange in Solomon Islands, told IPS the experiences that would be shared during the conference will be invaluable for small island states as they learn from each other how they are dealing with these issues and also learn from the international community on how they too are addressing these priorities of SIDS.

The fact that the conference will be bringing together governments and non-government stakeholders, including the private sector, provides a learning opportunity and one that will pose collaborative efforts on how everyone can work together in partnership to assist SIDS.

The conference will also create a space for civil society organisations (CSOs) to have an independent voice and also for governments to hear their views, she noted.

This may create further collaborative initiatives between governments and CSOs for sustainable developments in the SIDS.

Asked whether she expects any concrete outcome, Billy said the idea to form partnerships among all stakeholders including the governments to assist SIDS to do things for themselves “is one outcome that we anticipate the conference delivering.”

Any plan of action that the conference adopts should be inclusive of all stakeholders, she added.

“There should be emphasis on SIDS doing things for themselves to ensure sustainable development and that stakeholders and partners are seen as ‘friends’ who come to their rescue when they get bogged in a ‘rut’ but then let’s them carry on with what they are doing after being ‘rescued'”.

This is to alleviate or minimise donor dependency but also promote sustainable development.

“Finally, we expect that the issue of reducing corruption and increase transparency at all levels will be an overarching subject at the Conference and sound recommendations to alleviate corruption will be adopted and incorporated into the Plan of Action,.”