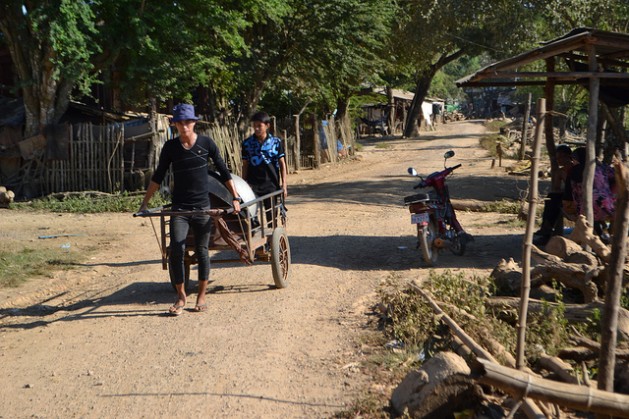 Cambodia is one of the world’s 48 Least Developed Countries. Credit: Michelle Tolson/IPS

UNITED NATIONS, Jul 8 2014 (IPS) - The 48 least developed countries (LDCs), described as the poorest of the world’s poor, want to be an integral part of the U.N.’s post-2015 development agenda currently under discussion.

An Open-ended Working Group (OWG), which will continue its 13th round of negotiations next week, is expected to come up with a set of new Sustainable Development Goals (SDGs) to replace the eight Millennium Development Goals (MDGs) which reach their deadline by the end of next year.

"The neo-liberal policies that have failed LDCs will continue to drive the agenda." -- Demba Dembele

However, negotiations remain tricky for LDCs in the 30-member OWG, according to diplomats involved in the negotiations.

Since LDCs constitute only six (Bhutan, Bangladesh, Benin, Tanzania, Democratic Republic of Congo and Tanzania) among the 30, they find themselves totally outnumbered by the “big voices”.

Still, LDCs are apparently better prepared than in previous U.N. fora, primarily because of “back-stopping” support from the UN-Office of the High Representative (OHRLLS).

But some LDC non-governmental organisations (NGOs) question whether a post-2015 agenda will help LDCs at all.

Demba Dembele, coordinator of the Senegal-based Forum for African Alternatives, told IPS, “What is written on paper will not be what will be implemented.”

The agenda will be hijacked by the United States, the European Union (EU), the World Bank, the International Monetary Fund (IMF) and the World Trade Organisation (WTO), he predicted.

“This means the neo-liberal policies that have failed LDCs will continue to drive the agenda, so as all special programmes for LDCs, since 1981, have failed,” he said. “Why should this one work?”

“I don’t share the ambassador’s optimism,” said Dembele, one of the main organisers of the 2011 World Social Forum held in Dakar, Senegal.

“What is needed is a paradigm shift away from market fundamentalism,” he declared.

Speaking at last month’s roundtable in London, which focused on LDCs and the post-2015 agenda, Ambassador Acharya painted a grim picture for LDCs.

He pointed out most of the LDCs have been buffeted by the effects of the world economic downturn and find themselves on the frontline of climate change.

This is a particularly cruel blow since agriculture provides the livelihood for 70 percent of the population of LDCs.

For Ambassador Acharya, climate change is “the elephant in the room that no one is prepared to face”.

Azeb Girmai, a civil society activist in Ethiopia, one of the LDCs in Africa, describes how climate change is affecting her country’s economy:  “We’ve had more droughts and more frequent floods, and increasingly erratic rainfall, and studies have shown that crop yields decreased by 13 percent between 1991 and 2008 because of climate change.”

She said “this is in a country where 85 percent of the population are farmers or rely on rain-fed agricultural production.”

Clare Melamed, director of the ODI’s Growth, Poverty and Inequality section, told the London meeting: “With discussions on the Open Working Group at a crucial stage, we want to make sure that a new set of goals resulting from the negotiations, works for the poorest countries.”

Dr. Arjun Karki, president of Rural Reconstruction Nepal, and international coordinator of LDC Watch, a network of LDC NGOs,
said “there should be no more excuses, or failed development paradigms based on predatory economic liberalisation in trade, finance and investment which have only led to multiple crises and a widening inequality gap.”

He said LDC Watch demands a “stand-alone goal” for LDCs so that the most vulnerable and marginalised countries are kept at centre stage.

Given the shortcomings of the MDGs, LDC governments and civil society want to ensure that SDGs have something to offer them.

There have been suggestions for specific targets within the SDGs, and a process to test how goals and targets would work for them.

This would also help direct resources towards LDCS, to level the playing field and make rapid progress possible.

“One crucial aspect of the negotiations on new goals is to agree a ‘means of implementation’, or a deal on what countries will do to help each other to achieve them,” said Melemed.

“This is particularly important for LDCs, who suffer some of the worst problems and have the least capacity to deal with them alone,” she added.

Two elements that LDCs want to see included in the SDGs are a stress on building capacity and strengthening global partnerships.

Given their young and dynamic population, the LDCs have a huge potential skills base, so they need support to take advantage of this asset and develop e-technology and set up science and technology agreements.

And to overcome the shortcomings of the MDGs, LDCs insist that the SDGs need to emphasise differential and preferential treatment, rather than seeking a set of overall goals for all to pursue.

Perhaps one of the strongest arguments for helping the LDCs work their way out of poverty is enlightened self-interest on the part of richer countries.

As Dr. Karki pointed out, “In LDCs, underdevelopment, hunger, economic weakness and insecurity create political instability, war and internal conflict, and the effects of this instability spill over into developed countries in the form of increased refugees and regional instability.”

U.N. Secretary General Ban Ki-moon puts it this way: (Supporting LDC development) “is not only a moral imperative, but also a means to promote a stable and peaceful global order.”