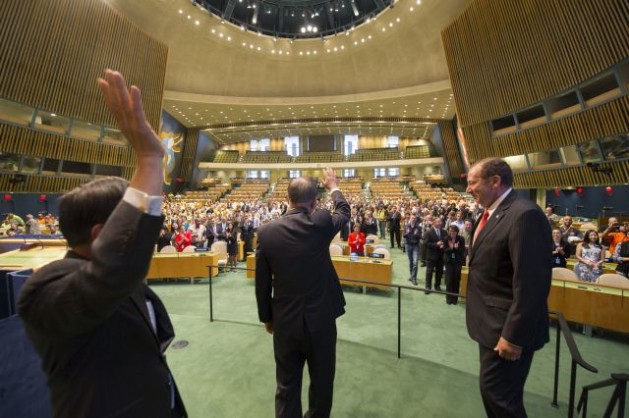 UNITED NATIONS, Sep 18 2014 (IPS) - When world political leaders arrive next week for the annual ritual of addressing the United Nations, they will be speaking inside a newly renovated General Assembly hall – part of a hefty 2.1-billion-dollar, seven-year refurbishing project – with an extended seating capacity for 204 member states, 11 more than the current 193.

In the next decade, the United Nations may be anticipating a rash of new member states, primarily breakaway nations triggered partly by separatist movements, seeking to join the world body.

As one Middle Eastern diplomat sarcastically speculated, “I was wondering whether one of those new seats is meant for the Islamic State of Iraq and Syria (ISIS)” (which the United States considers a terrorist group).

As in previous years, the drill next week will be the same: long-winded speeches, hundreds of bilateral meetings between world leaders (without even crossing the street) and a tight security around the U.N. perimeter.

And this year, the visiting political leaders – at last count, over 150 heads of state or heads of government – will be taking the podium at a time when the world is facing a slew of political and military crises, including in Syria, Iraq, Palestine, Ukraine, Afghanistan, Libya, Yemen and Somalia.

Ian Williams, a longstanding U.N. correspondent and an associate professor at Bard College, told IPS the completion of renovations to the General Assembly hall shows some degree of foresight, with a dozen or so spare places available for new delegations.

“With the pace of Balkanisation worldwide, however, that might not be enough,” he said, with tongue firmly in cheek.

Kosovo, Kurdistan, and not to mention the various Putinistans springing up on the fringes of Russia, could soon fill those seats, said Williams, who is working with artist Christian Clark on a new edition of ‘The U.N. For Beginners’ for the 70th anniversary of the world body next year.

He pointed out there is also increasing political Balkanisation of the blocs in the United Nations.

“In days of the old Cold War, there was a certain discipline. All the East Bloc speeches were drearily similar. Now, countries pay little heed to instructions from self-appointed superpowers and are more eager,” said Williams.

Asked if the General Assembly sessions have any impact at all on world events, Samir Sanbar, a former U.N. assistant secretary-general and head of the Department of Public Information, told IPS, “With all due respect to all visiting heads of state, I am not certain the term ‘leaders’ would apply anymore.”

That may partially explain the atmosphere of widespread turmoil the world over, he added.

“So many presidential appearances yet so little positive impact,” said Sanbar, who served under five different secretaries-general.

Until recently, he pointed out, there were endless bilateral meetings between presidents and prime ministers on the sidelines of the General Assembly session. The general debates during the sessions were substantive, and they constituted a backbone for eventual U.N. resolutions.

But most of those visits are now perceived as photo opportunities, said Sanbar, editor of the online electronic newsletter, U.N. Forum.

Addressing reporters Tuesday, Secretary-General Ban Ki-moon said, “At this time of turmoil, the next two weeks will highlight again the indispensable role of the United Nations in tackling global threats and seizing opportunities for common progress.”

He said the new session of the General Assembly will be “a pivotal period for our efforts to defeat poverty and adopt a new generation of sustainable development goals.

“Action on climate change is urgent. The more we delay, the more we will pay in lives and in money,” he said, on the eve of the heavily-hyped U.N. Climate Summit next week.

Williams told IPS the U.S. delegation then and for a long time afterwards suffered from a national diffidence about the United Nations.

He pointed out U.S. Congressional right-wingers continually harassed the United Nations with cut appropriations, while Democrats, with an eye to their more rabidly pro-Israeli lobbyists, would not cross the road to defend it.

Even the fact that there was money to repair the leaky Assembly Hall is result of the change of American attitude, he added.

But controversy at least creates noise. Now there is a deafening silence, said Williams.

“What happened to all those loons who thought U.N. peacekeepers would take over the United States with their black helicopters?” he asked. “And who remembers the U.N. land grab through World Heritage Sites, or the martyred GIs (U.S. soldiers) who refused to wear blue berets?”

Williams said one hopes they switched to new hobby horses, such as Benghazi, U.S. President Barack Obama’s birth certificate and similar distractions, rather than that the U.N. has become irrelevant.

“Because while the leaders will tut-tut from the podium about the strategic and seemingly insoluble problems – Ukraine/Russia, Syria/Iraq – the assembled leaders will still be in a position to assist the U.N. in serious issues: the flooding of the basement during Hurricane Sandy brought Climate Change home to Turtle Bay.”

Secretary General Ban Ki-moon is doing his best to concentrate the minds of assembled leaders on restarting effective negotiations on a Climate Change pact, said Williams.

“He will probably get better results with that than uniting the members on Syria,” he noted.

Sanbar told IPS when former General Assembly President Razali Ismail of Malaysia cautioned in 1996 about “creeping irrelevance” of these gatherings, he was almost branded a rebel.

“Now heads of key states dash in and out, mainly competing to speak on the first two days, while others who may be have been actually visiting New York a week before do not bother to show up at all,” he added.

“Even our own substantive star, Secretary-General Ban Ki-moon, who admirably maintained the momentum on climate change, seems to feel a need to bring in a Hollywood star for that purpose.

“It would be a Titanic if Leonardo de Caprio gets the Noble Peace Prize for that one,” said Sanbar, who thinks the secretary-general is making a case for the Nobel Peace Prize for his vigorous campaign on climate change.

Referring to the expansion of the General Assembly hall, Sanbar recounted that when the first expansion was planned, the architects sought to be very forward-looking to the year 1990 by designing it for 120 delegations (almost double the original members).

“On an equally sarcastic note,” he added, “you may explore a potential seat for Beyonce,” the celebrated singer, song writer and actress.