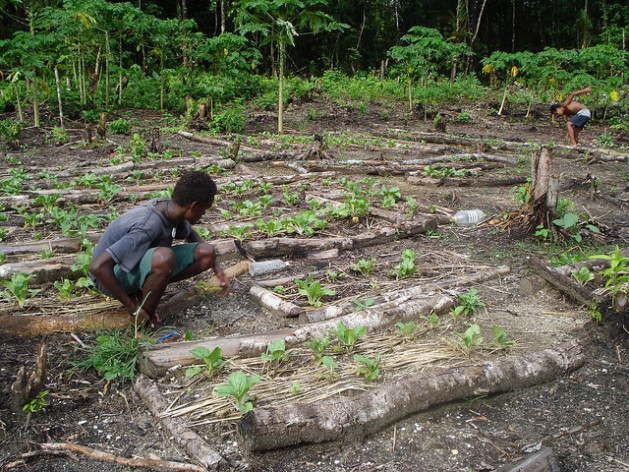 Soil degradation, climate change, heavy tropical monsoonal rain and pests are some of the challenges faced by farmers around the world. Credit: Catherine Wilson/IPS

UNITED NATIONS, Sep 15 2014 (IPS) - The much-ballyhooed one-day Climate Summit next week is being hyped as one of the major political-environmental events at the United Nations this year.

Secretary-General Ban Ki-moon has urged over 120 of the world’s political and business leaders, who are expected to participate in the talk-fest, to announce significant and substantial initiatives, including funding commitments, “to help move the world towards a path that will limit global warming.”

"What is needed to stop climate change are ambitious, equitable, binding emissions cuts from developed countries, along with finance and technology transfer to developing countries." -- Dipti Bhatnagar of FoEI

And, according to the United Nations, the summit will mark the first time in five years that world leaders will gather to discuss what is described as an ecological disaster: climate change.

But what really can one expect from a one-day event lasting probably over 12 hours of talk time, come Sep. 23?

“A one-day event was never going to solve everything about climate change, but it could have been a turning point by demonstrating renewed political will to act,” Timothy Gore, head of policy, advocacy and research for the GROW Campaign at Oxfam International, told IPS.

Some political leaders, he pointed out, will still use the opportunity to do that, “but too many look set to stay out of the limelight or steer clear of the kind of really transformational new commitments needed.”

Gore said the summit is designed as a platform for new commitments of climate action, but there is a real risk that even those that are made won’t add up to much.

“The focus on voluntary initiatives rather than negotiated outcomes means there are no guarantees that announcements made at the Summit will be robust enough,” he warned.

The Green Climate Fund (GCF), which was launched in 2011, is expected to mobilise about 100 billion dollars per year from developed nations by 2020, according to the United Nations. But it is yet to receive any funds that can be disbursed to developing countries to undertake their climate actions.

The Climate Summit is completely inadequate and expected ‘pledges’ by governments and business at the Summit will be tremendously insufficient in the face of the climate catastrophe, she warned.

“The whole idea of leaders making voluntary, non-binding pledges itself is an insult to the hundreds of thousands of people dying every year because of the impacts of climate change,” Bhatnagar said. “We need equitable, ambitious and binding emissions reduction targets from industrialised countries – not a parade of leaders trying to make themselves look good.

“But this fake parade is the only thing we will see at this one-day summit,” she added.

On Sep. 21, two days ahead of the summit, hundreds of thousands of people will march against climate change in New York and in cities across the globe.

Martin Kaiser, leader of the Global Climate Policy project at Greenpeace, told IPS, “We welcome Ban Ki-moon hosting a global climate summit this month and will be on the streets of New York on Sep. 21 as the largest climate march in history sends a loud and clear message that world leaders must act now.”

He said governments and businesses must bring concrete commitments to the summit: Corporations should announce firm deadlines by which they will run their businesses on 100 percent renewable energy.

Additionally, “Governments need to commit to phase out of fossil fuels by 2050 and take concrete steps to get us there such as ending the financing of coal fired power plants.

“We also expect governments to announce new and additional money for the Green Climate Fund to help vulnerable countries adapt to climate disasters and steer the world to clean and safe energy,” he added.

Developed countries’ leaders are neglecting their responsibility to prevent climate catastrophe. Their positions are increasingly driven by the narrow economic and financial interests of wealthy elites, the fossil fuel industry and multinational corporations, she added.

“What is needed to stop climate change are ambitious, equitable, binding emissions cuts from developed countries, along with finance and technology transfer to developing countries,” Bhatnagar added. “We also need a complete transformation of our energy and food systems.”

Oxfam International’s Gore told IPS there is also a need for more transparency to judge whether the announcements made are consistent with the latest climate science and protect the interests of those most vulnerable to climate impacts.

For example, he asked, “Are they consistent with a rapid shift away from fossil fuels towards renewables and do they ensure improved energy access for people that need it? Or do they just add green gloss to business as usual?”

Asked about the role of the private sector, Gore said: “We need private sector leadership to tackle climate change, and there are good examples emerging of companies that are stepping up to the plate.”

In the food and beverage sector, for example, Oxfam has worked with companies like Kellogg and General Mills to make new commitments to cut emissions from their massively polluting agricultural supply chains.

“But overall this Summit shows that too many parts of the private sector are not yet up to the job, as the initiatives that will be launched fall short of the transformational change we need,” he pointed out.

“This serves to remind us of the critical importance of strong government leadership on climate change – bottom-up voluntary initiatives are no substitute for real government action,” Gore declared.

“They make climate change worse day by day and on top of that they are still massively subsidised by the public unfortunately. These public subsidies must stop now,” she added.

As China has made significant progress on ending its coal boom at home, the Chinese government should grasp this opportunity to end the current “you go first” mentality that has poisoned progress through the U.N. climate talks, he said.

“Wouldn’t it be wonderful if China, emboldened by its domestic actions, were to lead the world to a new global climate agreement by announcing in New York that China will peak its emissions long before 2030?” Li asked.