LUSATIA, Germany, Aug 20 2014 (IPS) - Johannes Kapelle has been playing the organ in the Protestant church of Proschim since he was 14. The 78-year-old is actively involved in his community, produces his own solar power and has raised three children with his wife on their farm in Proschim, a small village of 360 inhabitants in Lusatia, Germany.

Now the church, his farm, the forest he loves dearly and his entire village is threatened with demolition to leave space for expansion of Swedish energy giant Vattenfall’s lignite (also known as brown coal) operations to feed its power plants. Nearly all of the fuel carbon (99 percent) in lignite is converted to CO2 – a major greenhouse gas – during the combustion process.

“What we’re seeing today is the result of putting economic thinking at the forefront. Our mantra is to just continue doing things as long as they generate profit. We need to counteract this trend with ethical thinking. We need to do what’s right!” – Protestant pastor Mathias Berndt

For Kapelle, this is inconceivable: “In Proschim, we’ve managed effortlessly to supply our community with clean energy by setting up a wind park and a biogas plant. Nowadays, it is just irresponsible to expand lignite mining.”

The desolate landscape the giant diggers leave behind stretches as far as the eye can see from just a few hundred metres outside Proschim.

“It’s only going to take about a quarter of a year to burn the entire coal underneath Proschim. But the land is going to be destroyed forever. You won’t even be able to enter vast areas of land anymore because it will be prone to erosion. You won’t be able to grow anything on that soil anymore either. No potatoes, no tomatoes, nothing,” says Kappelle.

Some 70 km northeast of Proschim, Protestant pastor Mathias Berndt also sees his community under threat. His church in Atterwasch has been around for 700 years and even survived the Thirty Years’ War in the 17th century. Now it is supposed to make way for Vattenfall’s Jänschwalde Nord open cast lignite mine.

The 64-year-old has been Atterwasch’s pastor since 1977 and refuses to accept that his community will be destroyed: “As Christians, we have a responsibility to cultivate and protect God’s creation. That’s what it says in the Bible. We’re pretty good at cultivating but protection is lacking. That’s why I’ve been trying to stop the destruction of nature since the days of the German Democratic Republic.”

“Vattenfall’s plans to expand its mines have given this fight a new dimension,” Berndt adds. “This is now also about preventing our forced displacement.”

Berndt is currently involved in organising a huge protest on August 23 – a human chain connecting a German and Polish village threatened by coal mining in the region. He has also been pushing his church to step up its efforts to curb climate change.

As a result, his regional synod has positioned itself against new coal mines, lignite power plants and the demolition of further villages. It is also offering churches advice on energy savings and deploying renewable energy. The parsonage in Atterwasch, for example, has been equipped with solar panels. 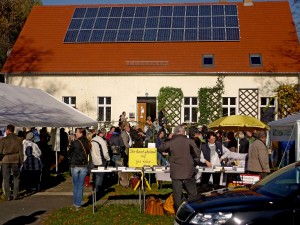 Despite Germany’s ambitions for an energy transition, its so-called Energiewende, the country’s CO2 emissions have been rising again for the past two years, for the first time since the country’s reunification. This is primarily due to Germany’s coal-fired power plants, and brown coal power stations in particular.

The Intergovernmental Panel on Climate Change (IPCC) has recently confirmed that it is still possible to limit global warming below 2° C. But there is only a limited CO2 budget left to meet this goal and avert runaway climate change.

As a result, more and more faith leaders are calling for divestment from fossil fuels. One of the most powerful advocates has been Nobel Peace Prize laureate and former South African Anglican Archbishop, Desmond Tutu, who recently called for an “anti-apartheid style boycott of the fossil fuel industry”.

Tutu’s call to action has been echoed by U.N. climate chief Christiana Figueres, who has urged religious leaders to pull their investments out of fossil fuel companies. 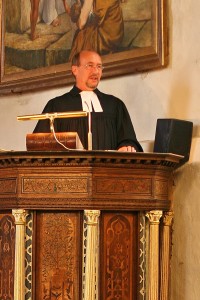 Many churches have taken this step already. Last month, the World Council of Churches, a fellowship of over 300 churches representing some 590 million people in 150 countries, decided to phase out its holdings in fossil fuels and encouraged its members to do the same.

The Quakers in the United Kingdom, the Anglican Church of Aotearoa, New Zealand and Polynesia, the United Church of Christ in the United States, and many more regional and local churches have also joined the divestment movement.

The Church of Sweden was among the first to rid itself of oil and coal investments. It increased investments in energy-efficient and low-carbon projects instead, which also improved its portfolio’s financial performance.

Gunnela Hahn, head of ethical investments at the Church of Sweden’s central office explains: “We realised that many of our largest holdings were within the fossil industry. That catalysed the idea of more closely aligning investments with the ambitious work going on in the rest of the church on climate change. ”

Meanwhile, from the frontline, pastor Berndt calls for putting ethics first: “What we’re seeing today is the result of putting economic thinking at the forefront. Our mantra is to just continue doing things as long as they generate profit. We need to counteract this trend with ethical thinking. We need to do what’s right!”