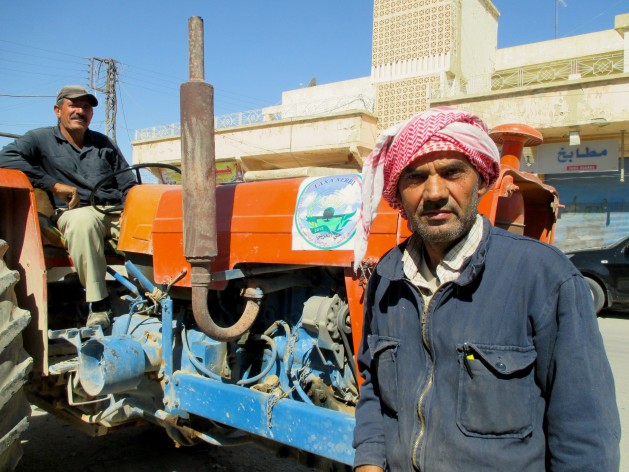 Garbage collection is among the many duties of the Democratic Self-Management in force in the three mainly Kurdish enclaves of northern Syria. Credit: Karlos Zurutuza/IPS

AMUDA, Syria, Oct 28 2014 (IPS) - There was never anything particularly remarkable about this northern town of 25,000. However, today it has become the lab for one the most pioneering political experiments ever conducted in the entire Middle East region.

Located 700 kilometres northeast of Damascus, Amuda hosts the headquarters of the so-called “Democratic Self-Management of Jazeera Canton”. Along with Afrin and the besieged Kobani, Jazeera is one of the three enclaves under Kurdish rule, although such a statement is not entirely accurate.

At the entrance of the government building, vice-president Elizabeth Gawrie greets IPS with a shlomo, “peace” in her native Syriac language.

“We decided to move here in January this year for security reasons because [Bashar Hafez al] Assad is still present in Qamishli – the provincial capital, 25 km east of Amuda,” notes the former mathematics teacher before tea is served.

The so-called "third way" attracted sectors among the other local communities such as Arabs and Syriacs, a collaboration that would eventually materialise into a Social Contract, a kind of ‘constitution’ that applies to the three enclaves in question – Jazeera, Afrin and Kobani

After the outbreak of civil war in Syria in March 2011, the Kurds in the north of the country opted for a neutrality that has forced them into clashes with both government and opposition forces.

This so-called “third way” attracted sectors among the other local communities such as Arabs and Syriacs, a collaboration that would eventually materialise into a Social Contract, a kind of ‘constitution’ that applies to the three enclaves in question – Jazeera, Afrin and Kobani

“Each canton has its own government with its own president, two vice-presidents and several ministries: Economy, Women, Trade, Human Rights … up to a total of 22,” explains Gawrie. Among the ministers in Jazeera, she adds, there are four Arabs, three Christians and a Chechen; Syria has hosted a significant Caucasian community since the late 19th century.

“We have lived together for centuries and there is no reason why this should be changed,” claims the canton´s vice-president, ensuring that the Democratic Self-Management is “a model of peaceful coexistence that would also work for the whole of Syria.”

While there was no religious persecution under the Assads – both father and son – those who defended a national identity other than the Arab identity, as in the case of the Syriacs and the Kurds, were harshly repressed. Gawrie says that many members of her coalition – the Syriac Union Party – have either disappeared or are still in prison.

Neither did Arab dissidents feel much more comfortable under the Assads. Hussein Taza Al Azam, an Arab from Qamishli, is the canton´s co-vice-president alongside Gawrie. From the meeting room where the 25 government officials conduct their meetings, he summarises the hardship political dissidents like him have faced in Syria over the last five decades.

“Since the arrival of the Baath Party to power in 1963, Syria has been a one-party state. There was no freedom of speech, human rights were systematically violated … It was a country fully under the control of the secret services,” explains Azam, who completed his doctorate in economics in Romania after spending several years in prison for his political dissent.

Wounds from the recent past have yet to heal but, for the time being, Article 3 of the Social Contract describes Jazeera as “ethnically and religiously diverse” while three official languages are recognised in the canton: ​​Kurdish, Arabic and Syriac. “All communities have the right to teach and be taught in their native language,” according to Article 9.

But it is not just language rights that Azam is proud of. “The three regions under democratic self-management are an integral part of Syria,” he says, “but also a model for a decentralised system of government.”

The members of government in Jazeera are either independent or belong to eleven political parties. Since local communities took over the three enclaves in July 2012, local opposition sectors backed by Masoud Barzani, president of the neighbouring Kurdistan Region of Iraq, have accused the Democratic Union Party (PYD) – the leading party among Syrian Kurds – of playing a dominant role.

“Basically we aim to decentralise power so that the people are able to take and execute their own decisions. It is a more sophisticated version of the concept of democracy, and that is in full harmony with many several social movements across Europe,” the political leader told IPS.

Spanish journalist and Middle East expert Manuel Martorell describes the concept of democratic self-management as an “innovative experiment in the region” which reconciles a high degree of self-government with the existence of the states.

“It may not be the concept of independence as we understand it, but the crux of the matter here is that they´re actually governing themselves,” Martorell told IPS.

Akram Hesso, president of Jazeera canton, is one the independent members in the local government. So far, the on-going war has posed a major hurdle for the holding of elections so Hesso feels compelled to explain how he gained his seat eight months ago.

“We had several meetings until a committee of 98 members representing the different communities was set up. They were responsible for electing the 25 of us that make up the government today,” this lawyer in his late thirties told IPS.

On Oct. 15, the parliament in the Iraqi Kurdistan Region approved a motion calling on the Federal Kurdistan Government to recognise and improve links with the administrations in Afrin, Kobani and Jazeera.

And while Hesso labels the move as a “major step forward”, he does not forget what is allowing the Democratic Self-Management to take root.

“Not far away there is an open front where our people are dying to protect us,” notes the senior official, referring to Kobani, but also to the other open fronts in Jazeera and Afrin.

However, he adds, “it´s not just about defending territory; it´s also about sticking to an idea of living together.”