NEW YORK, Oct 2 2014 (IPS) - In a new book cataloguing the recent history of clandestine exchanges between the U.S. and Cuba, the reliance on secret intermediaries belies the common perception that the two governments rarely communicated during the decades that followed the Cuban revolution in 1959.

Documents detail how Jimmy Carter acted as a secret intermediary for the Clinton administration during the 1994 Balseros immigration crisis and how Secretary of State Henry Kissinger ordered contingency plans drawn up to “clobber” Havana in 1976 in response to Cuba’s military intervention in defence of the Angola’s MPLA government.

One of the book’s novel revelations is the role of Jimmy Carter in acting as a secret intermediary between Washington and Havana during the 1994 Balseros crisis.

The new book, “Back Channel to Cuba”, was launched Wednesday at New York’s Pierre Hotel by co-authors Peter Kornbluh, a Cuba expert at the non-governmental National Security Archive, and William LeoGrande, a veteran Cuba foreign-policy specialist at American University in Washington, DC.

“It’s an odd place to hold a press conference, but for a historic reason,” said co-author Peter Kornbluh. “It’s the place where the first secret talks to normalise relations with Cuba were held, during a three-hour meeting here almost 40 years ago.”

The book is filled with a cast of secret intermediaries who have shuttled back and forth between the two countries even during times of intense hostility.

Despite Nixon’s opening to China in 1972 followed by the end of the Cold War and the dissolution of the Soviet Union in 1991, U.S. relations with Havana, which has been subject to a U.S. trade embargo since 1960, have remained antagonistic.

Most Cubans who fled to the U.S. in the decade after the 1959 Revolution – the majority of whom settled in the Florida – have long opposed all attempts by U.S. administrations to engage Havana in any way that, in their view, would serve to legitimise the Communist government there.

One of the book’s novel revelations is the role of Jimmy Carter in acting as a secret intermediary between Washington and Havana during the 1994 Balseros crisis. The crisis saw a flood of so-called Cuban “rafters” traverse the dangerous route to Florida in what the U.S. administration saw as a politically fraught replay of the 1980 Mariel boatlift that helped defeat Carter’s re-election bid. 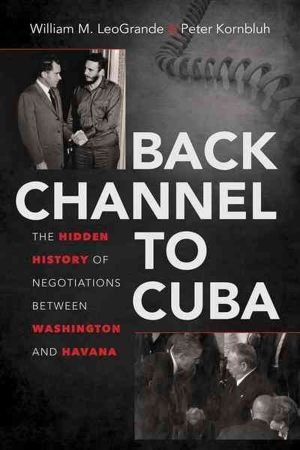 The former president, writing to Fidel Castro, talked of his “hope of finding common ground on which to resolve the crisis, and to prepare for a future resolution of long-term differences.”

With his support, an agreement was forged between the Clinton and Castro administrations of a “wet feet, dry feet” policy whereby Cubans who fled to the United States would be allowed to pursue residency if they reached shore. Through the Cuban mission at the United Nations, Carter negotiated the numbers of immigrants who would legally be allowed to remain in the U.S..

As president, Carter himself tried hard to normalise the U.S.-Cuban relationship. It was during his tenure that the U.S. and Cuba established Interest Sections in their respective capitals. But the intensification of Cold War tensions during the latter half of his term – in addition to the growing political clout of Cuban Americans opposed to any improvement in ties – significantly reduced his room for manoeuvre.

Even before Carter, Kissinger had himself tried to promote a détente with Havana, sending representatives Frank Mankiewicz and Lawrence Eagleburger to a meeting at LaGuardia airport in January 1975, to “explore the possibilities for a more normal relationship between our two countries,” and “determine whether there exists an equal determination on both sides to settle the differences that exist between us.”

That, in turn, set the stage for the meeting at the Pierre Hotel six months later. Eagleburger was again present, alongside Assistant Secretary for Inter-American Affairs William D. Rogers.

But Cuba’s intervention in Angola as various foreign-backed factions jostled for power in the run-up to that country’s independence from Portugal in November 1975 put paid to that effort. According to the new book, the former national security adviser and secretary of state was infuriated by Castro’s move, which proved decisive in the MPLA’s victory over rival factions backed variously by South Africa, Zaire, the U.S., and China, as well as South African mercenaries.

During a White House conversation with President Gerald Ford, Kissinger argued that Havana’s intervention raised the prospect of a “race war.”

Cuba had intervened in Angola on the eve of the new country’s independence from Portugal in 1975 in support of the MPLA against South African, U.S., and Chinese-backed factions, as well as South African and Zairean mercenary forces.

In the document, Kissinger says “I think we are going to have to smash Castro. We probably can’t do it before the [November 1976 U.S. presidential] elections.”

Kissinger and Ford were concerned that Cuba would repeat “Angola-style” military action in other African nations amidst intensified rivalry between the U.S. and the Soviet Union across the continent in an African version of the “domino theory” that was used to justify Washington’s ultimately disastrous intervention in Indochina beginning in the late 1950s.

“If they move into Namibia or Rhodesia, I would be in favour of clobbering them,” Kissinger said, according to the transcripts published in the new book. “That would create a furor … but I think we might have to demand they get out of Africa.”

Having won in Angola, Kissinger believed that Cuban forces could play a similar role in South-West Africa (now Namibia), Rhodesia (now Zimbabwe) and ultimately South Africa itself within five years. He thought it would be “easier to bring pressure on Cuba, as the closer and weaker partner in a tightly interwoven relationship, than on the Soviet Union” which supported both Cuba and the MPLA.

“At the tail end of the Kennedy administration, there were secret initiatives to open up a dialogue with Cuba and a hope that in the aftermath of the [October 1962] missile crisis, the Cubans were so angry with the Soviets [for promising to never deploy nuclear weapons to the island] that they would be enticed back into the orbit of the United States. The initiative was taken through the Cuban representative at the United Nations to reopen relations.

“At the same time, if you read some of President Kennedy’s speeches on Cuba, it’s as hard-line Cold War as ever. Just the president and a handful of people knew about [the secret initiative], so you didn’t see any reflection of it in the public dialogue.”

A key theme of the book is the common use of these back channels. Cutting through bureaucratic red tape has been attractive to both countries. “Presidents will always use some kind of channel,” LeoGrande told IPS. “Using diplomatic channels but keeping it secret is probably necessary for solving complex diplomatic issues.”

Successive presidents have preferred to use a personal envoy rather than go through the layers of the diplomatic process that increased the risks of press leaks. In fact, every single president has used these intermediaries since the revolution in 1959.

The authors are convinced that there are positive steps that could be taken to open formal channels with the Caribbean island. “If we didn’t have the embargo, and the democracy promotion programmes, we could have a normal and productive relationship with Cuba,” said LeoGrande.