Mourad Ahmia is the Executive Secretary of the Group of 77, the largest single coalition of developing countries at the United Nations

UNITED NATIONS, Oct 23 2014 (IPS) - When the Group of 77 commemorated its 50th anniversary recently, Inter Press Service (IPS) news agency was not far behind.

Established in 1964 as the largest news agency of the global South, IPS has been the voice of both developing nations and the Group of 77 for the past 50 years. 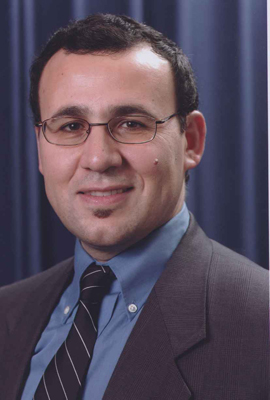 Mourad Ahmia. Courtesy of the G-77

Both are linked together by a single political commitment: to protect and represent the interests of the developing world.

The 50th anniversary celebration of the G-77 and IPS represents an opportunity to enhance and strengthen the joint partnership in projecting and promoting the concerns of the countries of the South.

For five decades the agency has, in its own way, provided technical help to delegations of the South in promoting the global development agenda of the South.

The integral role played by the Group of 77 in economic diplomacy and projecting the development interests of the global South is a testimony to its continued relevance in the ongoing global development dialogue.

IPS’s priceless contribution in that endeavor translates into promoting a new platform for global governance through critical information and communication.

IPS supported the publication for many years of the first ever G-77 newsletter: “The Journal of the Group of 77,” as well as publishing special editions of Terra Viva on various occasions, particularly the celebration of anniversaries of the Group of 77 and the South Summits.

The initiative to establish a global network of news agencies of the South, launched in 2006 by the G-77 and IPS under the chairmanship of South Africa, is still a work in progress.

Meanwhile, the G-77 has its own 50-year history of accomplishments.

When it was established on Jun. 15, 1964, the signing nations of the well-known “Joint Declaration of Seventy-Seven Countries” formed the largest intergovernmental organisation of developing countries in the United Nations to articulate and promote their collective interests and common development agenda.

Since the First Ministerial meeting of the G-77 held in Algeria in October 1967, and the adoption of the “Charter of Algiers”, the Group of 77 laid down the institutional mechanisms and structures that have contributed to shaping the international development agenda and changing the landscape of the global South for the past five decades.

Over the years, the Group has gained an increasing role in the determination and conduct of international relations through global negotiations on major North-South and development issues.

The G-77 adheres to the principle that nations, big and small, deserve an equal voice in world affairs... Today the Group remains linked by common geography and shared history of struggle for liberation, freedom and South-South solidarity.

Today, the G-77 remains the only viable and operational mechanism in multilateral economic diplomacy within the U.N system. The growing membership is proof of its enduring strength.

From 77 founding member states in 1964 to 134 and counting in 2014, it is the largest intergovernmental organisation of the global South dealing with the Development Agenda.

The Group was created with the objective to collectively boost the role and influence of developing countries on the global stage when it became clear that political independence, to be meaningful, required changes in the economic relations between North and South.

Thus, political independence needed to be accompanied by economic diplomacy with the ultimate objective of the reform of the international economic order.

Today, the G-77 represents the greatest coalition of humanity and remains a vital negotiating instrument in economic multilateral diplomacy, and for ensuring international peace and justice through international cooperation for development within the framework of the United Nations.

This has been the thrust of the joint expression of South-South solidarity since the Group’s creation, and its collective voice has spread to every institution and international organisation representing the hopes and aspirations of the majority of humanity.

The integral role played by the G-77 in economic diplomacy and projecting the development interests of the global South is a testimony to its continued relevance in the global development dialogue.

The Group has, through its compact Executive Secretariat limited resources, managed to work successfully with its development partners to analyse issues and propose alternative solutions to development challenges.

For 50 years the G-77 contributed to the formulation and adoption of numerous U.N. resolutions, programmes, and plans of action, most of which address the core issues of development. Its role in generating global consensus on the issues of development has been widely acknowledged by world leaders, diplomats, parliamentarians, academia, researchers, media and civil society.

It is a tribute to the historical validity of the conception, purposes, and endeavours of the Group, which have withstood the test of time.

The essential rationale for the Group was, and remains, to strive for a wider participation of developing countries in global economic decision-making and for inserting a development dimension in international institutions and policies within the framework of the United Nations system.

The Group presently consists of 134 countries, comprising over 80 per cent of the world’s population and approximately two-thirds of the United Nations membership.

The Group is the world’s second largest international organisation after the 193-member United Nations, and many countries, from emerging developing economies to least developed countries and small island developing states have chaired the Group, ranging in regions from Africa, Asia-Pacific to Latin America and the Caribbean.

2014 marks a milestone in the life of the Group with the celebration of the fiftieth year of its establishment, a period during which it has nearly doubled in membership and multiplied its south-south cooperation achievements while continuing to operate as a coalition of nations in promoting North-South dialogue for development.

It is remarkable that with such a diverse membership and without a formal constitution it has managed to endure the world’s political and economic turbulence for 50 years and remain true to its original mission in promoting the United Nations’ development agenda.

The G-77 has devoted five decades working to achieve development. It adheres to the principle that nations, big and small, deserve an equal voice in world affairs.

Today the Group remains linked by common geography and shared history of struggle for liberation, freedom and South-South solidarity.

In its 50 years, the Group of 77 has solidified the global South as a coalition of nations, aspiring for a global partnership for peace and development.

Today, the Group of 77 is recognised for its work to promote international cooperation for development towards a prosperous and peaceful world.

The commitment and dedication of the Group in selflessly shaping world affairs has benefited billions of lives worldwide, and such recognition of its significant contribution during the Group’s fiftieth anniversary is most appropriate.

Happy 50th anniversary for both G-77 and IPS!