VIENNA, Oct 17 2014 (IPS) - Oct. 18 is the EU’s Anti-Trafficking Day, as well as the United Kingdom’s Anti-Slavery Day. These events offer a good opportunity to talk about human trafficking within Europe’s borders, but we should not forget that there are victims and survivors all over the world.

People like Grace, not her real name, who grew up in a large family in Western Nigeria. On leaving high school her uncle lured Grace to Lagos with false promises that her education would continue. But instead of libraries and lessons, this young Nigerian girl was forced to wear suggestive clothing and work long hours in her uncle’s beer parlour. She was pressured into sleeping with any customer willing to pay. Her aunt kept the money. 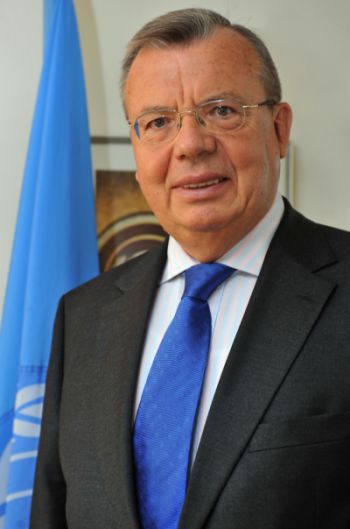 Those who are trafficked, like Grace, are often destitute, alone and afraid. In the face of exploitation and constant abuse it is difficult to summon the courage to flee. Fortunately, she had access to a radio and overheard a show on human trafficking.

One of the interviewees, a staff member for the African Centre for Advocacy and Human Development, encouraged anyone needing help to contact the centre. Grace realised there might be a way out.

Grace approached the centre after running away from her aunt and uncle. She was given a medical examination, as well as a place to sleep and counselling. The centre later sponsored her training as a seamstress, and later, with support, she was able to open a shop to sell her clothes. Grace had successfully taken the long journey from victim to human trafficking survivor.

Although Grace’s cruel experiences are individual to her, they are sadly not unique. In its publication, Hear Their Story, the UN Office on Drugs and Crime (UNODC) highlights numerous stories of children and young people forced to sell themselves, and their labour.

UNODC’s human trafficking report found that 136 different nationalities detected in 118 countries between 2007 and 2010, making this a truly global crime.

Around 27 per cent of those trafficked are children forced into numerous sordid occupations, including petty crime, begging and the sex trade. 55-60 per cent of individuals trafficked globally are women. If the figure for women is added to those for young girls, it becomes 75 per cent.

The majority of these women are coerced into the sex trade; many others find themselves working as domestic servants or forced labour. There is also a commonly held myth that men are not trafficked. This is untrue. Men are also exploited for forced labour and can suffer extreme forms of abuse.

To counter this crime that shreds both dignity and human rights, there is a need to work constantly at the grassroots level. We have to be present where the traffickers are committing their gross crimes, and where victims can be helped to make the transition to a new life.

Countries also need to ratify and adopt the Convention Against Transnational Organized Crime and its protocol on human trafficking. The Convention creates a legal framework for mutual legal assistance and other means of tackling organised crime. But what is really needed is comprehensive data, meaning better reporting from countries, and proper funding.

In 2011, the UN Voluntary Trust Fund for human trafficking managed by UNODC, and which has a special emphasis on children, provided grants to 11 organisations working at the ground level. Thanks to their work, children and young adults, such as Grace, have been supported. But more funds are needed to provide legal support and advice, treatment for physical abuse, safe houses, additional life skills, as well as schooling and training.

Grace’s life changed when she heard a radio story that helped her become a survivor. On the EU’s Anti-Trafficking Day and the UK’s Anti-Slavery Day, we have to ensure that other victims find their voices, and when they escape or are freed, we are waiting to offer much needed protection.