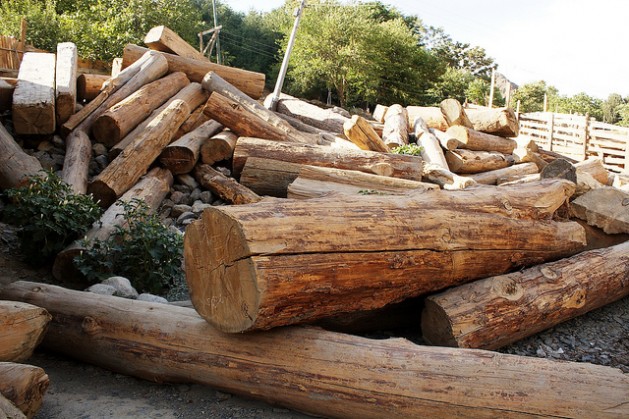 WASHINGTON, Oct 7 2014 (IPS) - A year after a U.S. company was accused of engaging in the systematic importing of flooring made from illegally harvested timber, pressure is mounting on federal agencies currently investigating the allegations.

In September 2013, federal authorities executed search warrants of two of the offices of Lumber Liquidators, the largest specialty flooring company in the United States. The company was suspected of importing illegally logged hardwood from far eastern Russia, in contravention of U.S. law.

“Illegal wood can’t hide and these products can’t be laundered as easily as they have been in the past." -- Alexander von Bismarck

Around the same time, a civil society group, the Environmental Investigation Agency (EIA), published a detailed report on the accusations, including extensive evidence suggesting that Lumber Liquidators was able to trade in this illicit hardwood through a Chinese supplier. In May, Greenpeace again questioned the company for doing business with suppliers reportedly linked to illegal logging in the Amazon.

Lumber Liquidators is currently being investigated by three U.S. agencies, and these probes are ongoing. While observers say that the complexities of such an international investigation would typically require timeframes of a year or more, in recent days green groups and others have stepped up pressure on the U.S. government to ensure accountability in the Lumber Liquidators case.

“There’s real reason to believe that Lumber Liquidators broke the law, and we’re particularly interested in this case being fully investigated and enforced,” Jesse Prentice-Dunn, with the trade programme at the Sierra Club, a conservation and advocacy group, told IPS.

“We’ve been educating our members about U.S. law on this issue, and they have been very enthusiastic. A huge number of our members are now asking President Obama to fully enforce these laws.”

On Friday, the Sierra Club announced that more than 100,000 of its members had submitted petitions warning that “many companies will not move to make their supply chain sustainable until they see strong enforcement of the law.” Similar concerns were voiced in a letter sent last week by environment and organised labour groups to the three U.S. officials in charge of the Lumber Liquidators probes.

Meanwhile, Lumber Liquidators also took fresh action last week, announcing a new sustainability policy and website. In a release, the company noted that the new policy includes DNA testing of harvested timber, internal and external lumber audits, as well as a move towards sourcing within North America and “away from regions considered to have lower oversight”.

Yet in making the announcement, the company, which has maintained its innocence throughout the past year, outraged watchdog groups by suggesting that its past missteps had been more about communications than systemic problems.

“Admittedly, we’ve been more focused on our sustainability efforts than communicating broadly about them,” Ray Cotton, a Lumber Liquidators vice president, said in a statement unveiling the new website.

Asked by Canadian reporters whether it had ever sold wood “sourced illegally in the Russian Far East”, the company says “No,” in an official statement provided by EIA. It also claims both that the EIA investigation “contained fundamental inaccuracies and unsubstantiated claims” and that the report never alleged that Lumber Liquidators had violated U.S. law.

“Certainly that doesn’t give folks confidence in the company’s sustainability plan, if the overall focus is simply on improving communications. Rather, the first step towards substantive action would need to be taking a sober view on what has actually happened.”

The U.S. law at the heart of the federal investigations is known as the Lacey Act, passed in 2008. It is widely seen as a pioneering piece of legislation, and one that some say is already having a global impact, including in China.

As in the allegations surrounding Lumber Liquidators, China has emerged in recent years as a major intermediary for the global wood industry, both licit and illicit. Over the past decade, Chinese exports of wood products have increased by upward of 30 percent per year.

Today, the country is the world’s largest exporter of wood products, with more than 12 percent of the global market, valued at almost 12 billion dollars in 2012. Yet that sector is also said to be one of the most opaque of any commercial market with which the United States trades.

Still, EIA’s von Bismarck says that some changes have started to take place in how the Chinese authorities are approaching the issue of illegal wood laundering. He also notes that this is what makes the Lumber Liquidators case – and the potential response by U.S. authorities, following the current investigations – so important.

While the Chinese authorities, for the first time, have started discussing illegal logging in international fora, the response has been incomplete, von Bismarck warns. This is largely because of the extent to which companies are still able to ignore laws like the Lacey Act.

“That allows Chinese industry to make the assessment that they don’t need to change their practices – because the wood is still getting in,” he says.

“So the whole situation is hanging in the balance, and the Lumber Liquidators case is a critical signal to the Chinese industry associations that are currently deciding which way they are going to go. That will decide whether, in a few years, we will have a new law of the land for the wood trade.”

While some environmentalists have started to criticise the Lacey Act, von Bismarck says the current investigation is proof that the legislation is working.

“The fact that the U.S. government is investigating a case that involves illegal logging in one country and manufacturing in another before it gets to the United States is a very positive sign for the overall efficacy of the law,” he says.

“Illegal wood can’t hide and these products can’t be laundered as easily as they have been in the past, and that could bring about a sea change in the industry. That probably hasn’t yet been digested by all corners of the global wood industry, but it will be.”