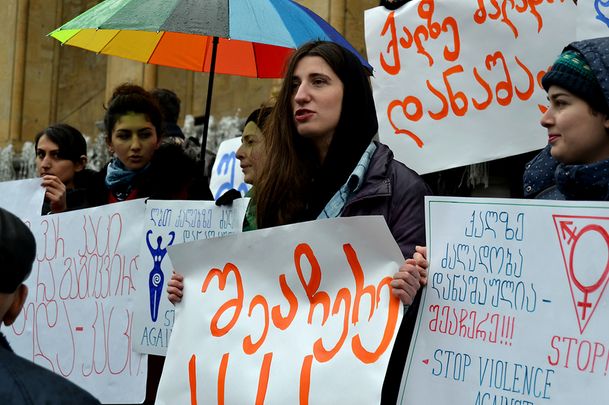 Georgians gathered in central Tbilisi on Nov. 25 to rally against domestic violence during the International Day for the Elimination of Violence against Women. Credit: Giorgi Lomsadze

TBILISI, Dec 11 2014 - The issue of domestic violence is moving to the forefront of public attention in Georgia after a series of killings of women at the hands of their respective spouses or ex-spouses made headlines in local mass media.

While no quick fix exists for the spike in violence, observers believe that changing the way police respond to abuse complaints is a good place to start.

When 22-year-old model Salome Jorbenadze phoned the police earlier this year in the western town of Zugdidi, she was hoping to receive protection against her abusive former husband. But all she received was a lecture from two policewomen about what a woman has to do to pacify an embittered ex, a source familiar with the case told EurasiaNet.org.

”For many, being a man means to show that you've got the power, that you are in charge, and some just flip when they cannot assert that role and they take it out on women.” -- Naniko Vachnadze

Jorbenadze went on to complain to an in-house police-oversight agency. But no restraining order was issued against her former husband, Sergi Satseradze, a police officer. He later shot Jorbenadze dead in a crowded Zugdidi park on Jul. 25.

Twenty-four other women are estimated to have met similar fates this year. One analyst studying the trend asserts police have repeatedly failed to act on women’s reports of receiving threats from their former or current spouses.

“Such cases show that the state is failing to fulfill its ultimate human rights commitment: protecting the lives of its citizens,” said Tamar Dekanosidze, an attorney specialising in human-rights law at the Georgian Young Lawyers’ Association, a civil-rights watchdog.

English teacher Maka Tsivtsivadze also reported death threats she was receiving from her former husband, but he only received a verbal warning from police. Her Oct. 17 murder, taking place in broad daylight inside a centrally located university building in the capital, Tbilisi, shocked city residents.

The number of such killings is believed to be a record for a single year, but the way the police categorise such murders muddies the picture. A killing involving a man and his current or former wife is almost always classified as an unintentional, rather than premeditated murder – even in one 2013 case when an ex-husband fired 24 shots at his ex-wife, Dekanosidze said.

Prosecutors and police did not respond to requests for comment.

Tsivtsivadze’s case may be a tipping point for change. Amid a recent series of protests and rallies designed to heighten awareness of domestic violence, officials have acknowledged that Georgia has a femicide problem. It has set up an ad-hoc commission to collect recommendations from civil society groups and international experts on how to tackle gender-based violence.

UN Women, the United Nations agency that focuses on women’s issues, has advised that simplifying procedures for issuing restraining orders could help. The organisation’s Georgia branch has suggested allowing police to issue a restraining order even without court approval, and using bracelets “to control compliance,” said Irina Japaridze, who runs a gender-equality programme for UN Women.

At the same time, many recent public discussions have tried to put Georgians collectively on the couch to try to gain insight into the motivations behind the violence. Social psychologists worry about a copycat-killing effect, but Georgian society’s patriarchal norms are broadly seen as the root of the problem.

“I think we generally have very wrong ideas about what it means to be a man,” commented Naniko Vachnadze, a female graduate student at the Georgian Institute of Public Affairs in Tbilisi. ”For many, being a man means to show that you’ve got the power, that you are in charge, and some just flip when they cannot assert that role and they take it out on women.”

Thirty-four percent of 2,391 respondents in a 2013 poll run by the UN Women programme said that violence against women “can be justified in certain domestic circumstances, such as neglect of maternal duties or other family cares,” Japaridze said.

Men are often given the benefit of the doubt for such behaviour, an attitude that can result in psychological abuse, Vachnadze said. “Many husbands are telling their wives not to go to work, not to visit friends, stay home and raise the kids,” she elaborated.

The perception of a husband’s role can continue even after a divorce. Many Georgians see an ex-wife leading an independent life as a humiliation for the man.

As elsewhere in the macho Caucasus, male and female frequently are not seen as created equal. The tradition of parents passing on property exclusively to a male heir still exists; a female fetus tends more often to lead to an abortion.

Other underlying psychological issues are believed to contribute to abuse – namely, the traumatizing post-Soviet experience of wars, lawlessness and economic collapse, as well as stress associated with the fast pace of societal change over the past two decades. Some see the violence even as a manifestation of men’s reaction to urban Georgian women’s increasing public prominence, whether as entrepreneurs, politicians, civil-society figures or, even, car drivers.

“Although we say that we live a very traditionalist society, many cultural changes have happened in recent years and it is clashing with ossified views on gender roles,” commented prominent art critic and feminist activist Teo Khatiashvili.

Tackling the cultural aspects of violence against women may be a far greater challenge than improving the police response, but Georgia, as a signatory of the U.N. Declaration on the Elimination of Violence against Women, has international commitments to do so.

Parliament is expected soon to ratify the Istanbul Convention, a treaty that stipulates that a failure to address domestic violence constitutes a human-rights violation. Prime Minister Irakli Gharibashvili has underlined that Georgia does not shy away from such definitions.

“Respect for women is a lasting tradition in Georgia and the increased acts of violence against women are incompatible with this tradition and are extremely shameful,” he said on Nov. 25, the International Day for the Elimination of Violence against Women.

Editor’s note:  Giorgi Lomsadze is a freelance journalist based in Tbilisi. He is a frequent contributor to EurasiaNet.org’s Tamada Tales blog. This story originally appeared on EurasiaNet.org.