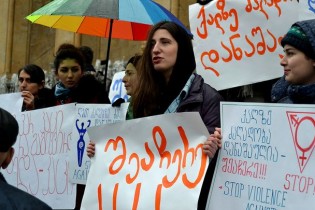 By Paul Rimple
It turns out the choice between gold and historical preservation is an easy one to make for officials in Georgia: the government is going for gold.

By Molly Corso
The South Caucasus country of Georgia is a source of much sought-after Christmas tree seeds. But its own forests are now under threat, as firewood is in increasing demand as a cheap source of heat for homes, schools and hospitals.

Could Georgia’s Orthodox Church Become a Font of Intolerance?

By Molly Corso
In the two-plus decades since the Soviet collapse, the Georgian Orthodox Church has emerged as one of the South Caucasus country’s most respected and influential institutions. But some observers and theologians now worry that ultra-conservative clerics within the Church are gaining too much power.

By Matthew Charles Cardinale
Advocates of the concept of "energy equity" have begun employing it in the southern United States to create a diverse coalition of citizens who might otherwise approach energy policy issues differently.

By Molly Corso
Georgia may be touted as the most pro-Western country in the South Caucasus, but the recent backlash against LGBT activists in Tbilisi underscores how wide the cultural divide is when it comes to defining democratic values.

By Molly Corso
Rooted in longstanding historical, religious and economic differences, Georgian animosity toward neighbouring Turkey, Georgia’s fifth-largest investor, appears to be growing in the Black Sea region of Achara.