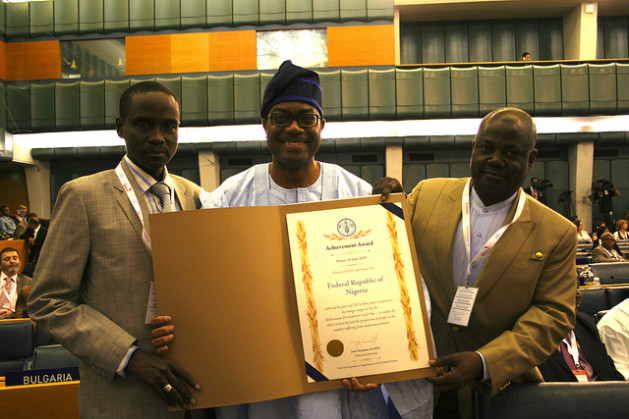 ROME, Jun 16 2013 (IPS) - Thirty-eight countries were recognised for the first time on Sunday by the U.N. Food and Agriculture Organisation for cutting in half the prevalence of people suffering from undernourishment, one of three targets under the first Millennium Development Goal.

“You are the proof that when societies decide to put an end to hunger, when there is political will from governments, we can transform that will into action,” FAO Director General Jose Graziano da Silva told leaders of the awarded countries during the Rome ceremony. “Thank you for showing us that it is possible.”

At the Rome World Food Summit in 1996, countries around the world committed to working towards food security for all. In 2000, the U.N. adopted the eight Millennium Development Goals, meant to guide global efforts towards offering all people a decent life.

MDG One, “eradicating extreme poverty and hunger”, is broken down into three targets: reducing by 50 percent the proportion of hungry people, achieving decent employment for all, and halving the number of people living on less than 1.25 dollars a day by 2015.

Received with broad acclaim by the FAO assembly during the award ceremony, the new Venezuelan president, Nicolas Maduro, outlined in brief his country’s path to reducing hunger prevalence from 13.8 percent to 2.4 percent over the last decade, emphasising the core role played by former president Hugo Chavez in this battle.

“We are asking the FAO to assist us in creating a system to safeguard a permanent, stable food supply, which would permit us to confront the covert speculative attacks that Venezuela is currently enduring,” he told IPS TV.

Caribbean small island state Saint Vincent and the Grenadines is another of the countries acknowledged for meeting both goals. Since the early 1990s, it has reduced hunger rates from 20 percent to 4.9 percent, according to Prime Minister Ralph Gonsalves, who spoke to IPS on the sidelines of the Jun. 15-22 FAO biannual conference in Rome.

Gonsalves explained that climate change and pressures from international markets on domestic banana production posed significant challenges to his country in the attempt to defeat hunger. And yet the 120,000-person state seems to have found a working mix of solutions.

“We have a history of root vegetables and fruit crops and an accumulated two centuries worth of knowledge resident in the folk which should be mobilised and is being mobilised,” Gonsalves said.

“Secondly, important is the organisation of farmers to engage in cooperative work with the state. Finally, we are implementing targeted solutions such as feeding programmes for school children and the elderly and in general developing a strong safety net.

“We are addressing the production side but also the consumer side through targeted interventions,” the prime minister said.

Georgia, another country recognised in Rome, reduced the prevalence of malnourishment from 60 percent to 25 percent over the past decade, according to FAO figures.

“This was possible because of a number of different measures that we took to generally improve the economy and combat corruption and mismanagement, which allowed us to have double-digit growth for the past years,” Georgian President Mikheil Saakashvili told IPS in Rome.

Current estimates put the number of people suffering from hunger today at 870 million.

According to the U.N.’s The State of Food Insecurity in the World 2012 report, significant progress has been made on combating hunger since 1990, yet in some areas around the world this was either slowed down or even reversed by the global economic crisis.

The U.N. says that meeting the MDG goal of halving hunger prevalence by 2015 is within reach but only if measures are taken to make up for the negative impact of the crisis.