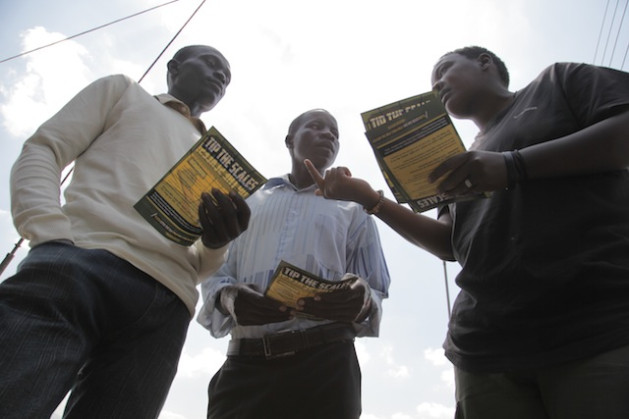 NAIROBI, Jun 14 2013 (IPS) - On a side street in Nairobi’s bustling neighbourhood of Shauri Moyo, Faisal Ngila shouts to street vendors, motorbike taxi drivers and pedestrians. “Do you know taxes are increasing in Kenya?” he asks, handing out flyers urging Kenyans to say “no to Unga (maize flour) tax” by dialling a phone number that will register their signature on a petition.

Ngila is one of 17 activists involved in the campaign Kenyans for Tax Justice, speaking out against a new Value Added Tax (VAT) Bill, known popularly as the “Unga tax bill”. In trains, buses, football stadiums and community centres, the activists are trying to raise awareness and compile a petition against the bill.

The bill seeks to apply a 16 percent value added tax rate on basic commodities that have remained untaxed until now. These include rice, bread, maize flour, processed milk and sanitary pads. When the bill was introduced to parliament in 2012, citizen welfare groups strongly opposed its adoption. But it is now up for debate in parliament.

Many ordinary citizens in Kenya are worried about the bill’s impact on their already-meagre incomes. “I am not really working. Sometimes I do casual labour washing dishes and clothes,” Julia Njoki, a mother of four, tells IPS. “If they add tax to maize, bread and milk, I will not be able to buy anything.”

"If a poor person buys a small packet of milk every day, they are paying VAT every day and, in the long run, they end up paying more tax than the rich.” -- Sarah Muyonga

Blessol Gathoni, one of the activists from Kenyans for Tax Justice, tells IPS that they are aiming for 20,000 signatures on their petition, which will be presented to members of parliament on Monday Jun. 17. So far, around 9,000 people in this East African nation of 42 million have signed it.

“Tax is not very sexy to discuss, so the first issue is to get people to think about how this bill will affect them and if they’re moved, they can go ahead and call the number (to add their names to the petition),” she says. “People do not know that they are actually supporting the economy and that they should be demanding their rights.”

VAT and the economy

Value Added Tax was introduced to Kenya in 1990 and since then has been subject to numerous amendments, including the introduction of tax refunds and zero rating on basic articles like food and imports used for manufacturing.

It accounts for 28 percent of total tax revenues in Kenya, second after income tax.

The International Monetary Fund (IMF) has backed the new VAT bill on the grounds that it will increase the government’s sources of revenue.

According to the National Treasury, under the country’s current tax regime, Kenya loses 11 billion shillings (129 million dollars) in revenue and the current VAT structure is “complex, inefficient and unproductive.”

The Kenya Revenue Authority’s Commissioner for Domestic Taxes Pancrasius N. Nyaga tells IPS that the VAT bill as it stands must be overhauled to seal loopholes that may create tax leakages in the economy.

“Zero rating on goods is actually benefiting the manufacturers and not the consumers or the common people,” says Nyaga.

“If you look at the Thika road project, you will find that the contractors were granted zero-rated status and purchase commodities without paying VAT. That creates a loophole. If they buy a lot of cement, the government loses VAT and it can be sold on the black market, undercutting genuine traders.” Thika road, the main highway in Nairobi, is being expanded from four to eight lanes.

Nyaga adds that those mobilising against the bill are not seeing the overall positive impact on the economy.

“I think the whole issue has been misunderstood and people are trying to gain political mileage out of it. The pricing is not such a big deal. When VAT is spread evenly across all commodities, it will be self-regulating, and prices will not impact negatively on everyone.”

But Kwame Owino, chief executive officer at the Institute of Economic Affairs Kenya, a public policy think tank, tells IPS that while the VAT bill will create predictability in tax revenue collection, it will also raise the prices of basic goods.

“Its justification is not an increase in tax, but if you are expanding the number of goods to which VAT applies, then it necessarily means that you are increasing taxes,” he says.

But in a country where, according to the World Bank, the average person earns 1,700 dollars a year, such price increases may have serious implications for ordinary citizens.

According to Sarah Muyonga, policy and advocacy manager at Tax Justice Network Africa, which supports transparency in international finance, low-income earners are likely to bear the burden of the tax increases.

“I consider it a myth that the rich consume much more than the poor. The poor consume more regularly in smaller quantities. If a poor person buys a small packet of milk every day, they are paying VAT every day and, in the long run, they end up paying more tax than the rich,” she tells IPS, referring to the fact that poor people spend a larger percentage of their income on taxable goods than rich people do.

The activists mobilising against the VAT bill say they want to use the campaign to highlight the government’s hypocrisy in taxing ordinary citizens, while “multi-billion shilling companies” are “given tax breaks and holidays.”

Tax Justice Network Africa estimates that in 2010 and 2011, the government spent more than twice the country’s health budget on providing tax incentives. Kenya’s health budget for 2010/2011 was 485 million dollars.

However, a 2006 report by the IMF states that investment incentives and, in particular, tax incentives, are in fact “not an important factor in attracting foreign investment.”

Nyaga says the government is looking to overhaul its tax incentive regime. However, he adds, tax incentives have nothing to do with the proposed VAT bill. “With this bill, we are not targeting low-income people at the expense of the large corporations as suggested. We will be addressing all deficiencies in the tax,” he says.

However, the international organisation against poverty, The Rules, is not convinced and has said that ongoing talks between the City of London and the Kenyan government are “aimed at modelling Kenya’s financial system on the City of London,” a “hub of the global tax haven system through which billions in untaxed profits flow every day.”

“The Kenyan government has hired the most aggressive financial liberalisers in the world to advise them,” Martin Kirk, global campaigns director for The Rules, tells IPS.

“So vague promises of overhauling tax incentives sound pretty hollow in the face of evidence. Taxes have to be paid. If some people don’t pay, others are forced to. What we’re seeing with the Unga tax is an example of that. Tax theft by the rich is costing Kenya billions of shillings every year, so the poorest are being told to pay more to pick up the tab.”