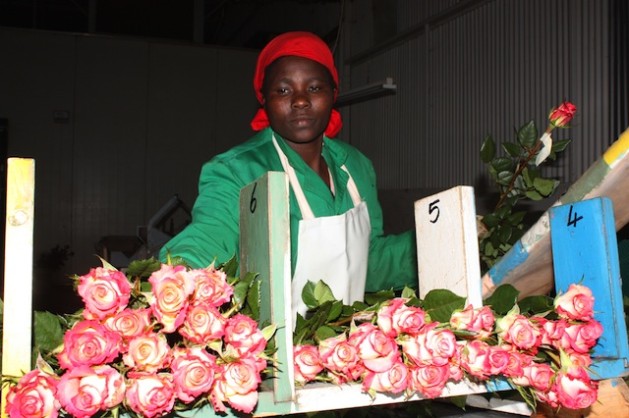 NAIVASHA, Kenya, Jun 10 2013 (IPS) - Catherine Mumbi knows the difficulties of working in Kenya’s flower sector. She was fired as a casual worker at a flower farm after taking time off to recover from complications of the liver. But that was just the start of her problems.

“When I felt better I went back but my superior demanded that I have sex with him to keep my job,” says Mumbi, who had taken two months off while being hospitalised for her illness. “I declined.”

“The following morning a watchman knocked on my door with a letter saying my job was over and that I should immediately vacate the company’s compound,” Mumbi tells IPS. “I have been jobless since then…. I am surviving on the generosity of well wishers since December 2011.”

There is a possibility that Mumbi’s job could have also caused her illness in the first place.

IPS visited a few flower farms in Naivasha, in Kenya’s Rift Valley Province, where access is restricted and the grounds are monitored by security guards. Here, for hundreds of workers like Mumbi, a healthy rose means a shortened lifespan.

Inside the greenhouses measuring up to eight by 60 metres, all is quiet except for the occasional supervisor barking orders. The plucking and trimming goes on without a fuss as heaps of newly harvested roses keep piling up.

Even the smell of freshly-sprayed chemicals does not appear to interrupt the order and discipline in the farms that have sprung up in Naiposha, a once patchy terrain 30 kilometres away from the town of Naivasha.

According to Charles Kasuku, a social worker in Naivasha involved in a previous audit on the working conditions in Kenya’s flower sector, there are instances where the labels of chemicals are changed to disguise them from being identified as toxic.

For example, campaigning for the phasing out of methyl bromide, a highly toxic poison, began as early as 1998. But there is evidence that the chemical is still currently being used.

“This explains why incidences of patients with strange diseases are being reported in health centres around flower farms,” he tells IPS. “Recently, a former worker died from what doctors said was chemical complications.”

Experts from the Kenya Medical Research Institute (KEMRI) told IPS the most prevalent diseases caused by chemical exposure include liver problems, respiratory complications and cancer, as well as sexual incapacitation.

“But the severe effects of these exposures could come many years later after workers have been sacked from their jobs,” Dr. Mohamed Karama of KEMRI tells IPS. “People should not work for extended hours in these greenhouses.”

The extent of human rights abuses in Kenya’s flower farms is no anomaly, more than a decade after civil society raised concerns. Documentaries have even been made capturing the trail of cruelty. A recent documentary, “Women of Flowers,” indicates that workers in the sector are so poorly paid that they cannot afford a hospital bill.

A parliamentary debate last year indicated that workers are paid about 47 dollars a month, way below the 118 dollars that Kenya’s constitution recommends for casual labourers.

Those working on the farms are afraid of speaking out for fear of losing their jobs and livelihoods. In addition, a report released this May by Workers Rights Watch, a registered association of workers, shop stewards and key leaders in Kenya, says 60 percent of female workers in the flower sector face sexual harassment.

The Horticultural Development Authority estimates there are more than 70,000 women working in the sector. The Kenya Flower Council (KFC) claims the sector employs close to 100,000 people. According to the KFC, small-scale farmers account for about 2,500 farms, while there are more than 150 medium and large farms.

Horticulture is one of the top foreign-exchange earners for Kenya and the KFC estimates that the industry generates about one billion dollars in earnings annually. But for thousands of women who work here, the flow in profits means suffering in silence.

At the same time, trade movements are backed by the Kenyan Directorate of Occupational Safety and Health Services, which is expected to empower trade unions to rally for the welfare of the worker.

“Labour inspections do not happen anymore,” Mary Kambo, a programme officer with Community Based Development Services, tells IPS while commenting on the implementation of the ILO Labour Inspection Convention.

The permanent secretary in the Ministry of Labour, Beatrice Kituyi, however, says such allegations are misplaced since records showing progress that Kenya has been making in implementing the convention can be accessed on the Ministry’s website.

“Kenya is on track in terms of implementing the ILO convention,” Kituyi tells IPS. “A lot of what we have done can be accessed at our website.”

Meanwhile, some unionists are hopeful that rallying for the welfare of workers in Kenya is not a lost cause.

The KFC also says it has rallied its members, who are mainly large-scale flower farmers, to comply with health and environmental standards.

According to Jane Ngige, KFC chief executive officer, flower farmers are expected to follow requirements such as trade, statutory, environmental, health, safety, traceability and social standards as enshrined in the Council’s Code of Practice and the Fair Trade set of rules for a safe working environment and fair working conditions.

“We do not allow farms associated with human rights abuses to be members of the council,” she tells IPS. “They have to comply with the ethical standards.”

But Benjamin Tilapei, a civil activist, tells IPS: “The flower council is only concerned about the rich producers and not the struggling poor working on the farms.”