Bringing Kenya’s Government to the People 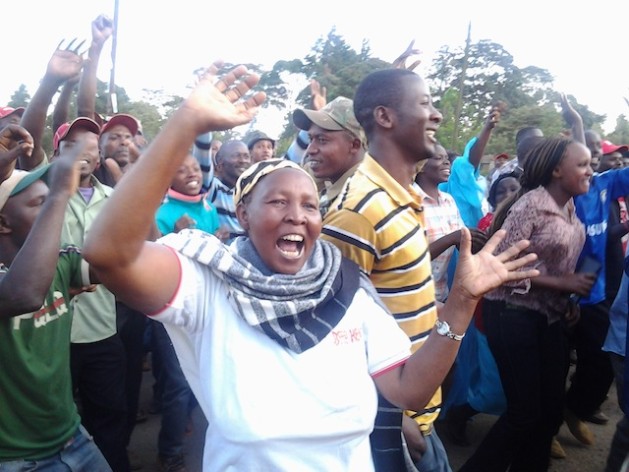 Kenyans celebrating the Mar. 5 announcment of Uhuru Kenyatta’s presidential victory. And with a new president comes a new form of government. Credit:Miriam Gathigah/IPS

NAIROBI, Apr 11 2013 (IPS) - Like many Kenyans, Eunice Kemboi arrived at the Moi International Sports Centre in Nairobi on Tuesday Apr. 9 to witness the transition of power as Uhuru Kenyatta, an International Criminal Court suspect, was sworn in as the country’s new president.

“Kenyatta promised that the 70 million dollars set aside for a runoff election (which was not used) would be used to set up a women’s and youth fund,” the smallscale farmer from Eldoret, Rift Valley Province told IPS.

In a record 86 percent voter turnout on Mar. 5, Kenyans elected Kenyatta as the fourth president of this East African nation. He won 50.07 percent of all votes cast, according to the country’s Independent Electoral and Boundaries Commission.

His opponent, former Prime Minister Raila Odinga, garnered 43.3 percent. However, Odinga filed a presidential petition with the Supreme Court challenging the results and citing massive irregularities. On Mar. 30, the court ruled that Kenyatta and his deputy, William Ruto, also an ICC suspect, were validly elected.

Kenyatta replaces outgoing President Mwai Kibaki, who served two five-year terms of office that were riddled with allegations of corruption. But with a new president comes a new form of government.

From midnight on Mar. 5, Kenya implemented a new devolved system of government and with the new system decisions affecting Kenya’s 47 counties will now be taken at local, as opposed to national, level.

“When the national budget is being read in parliament, millions of poor Kenyans huddle around their radio sets for news about the price reductions of major items – our concern being our day to day survival,” Benjamin Owuor, a mason in Nairobi, told IPS.

Economist and market researcher in East Africa, Danson Mwangangi, told IPS that the centralisation of power and resources compromised the establishment of strong linkages between policy, planning and the execution of the national budget.

“National budget resources have not trickled down to the ordinary Kenyan in a manner that has improved service delivery or even addressed their plight effectively,” he said.

Policy analyst Ted Ndebu told IPS that devolution reduced “horizontal inequalities across regions by not only bringing resources to within the grasp of communities, but by also providing the people with an avenue to realise their priorities.”

Government statistics show that every year, slightly over one million people from other parts of the country move to Nairobi to eke out a living.

As a result, according to Ndebu, the country is experiencing massive inequalities in various regions as the best brains move to Nairobi to where the resources are.

He added that the centralised system of governance did not take into account poverty levels across regions when distributing resources.

“Take Central (Province), for instance. While poverty levels are generally above 60 percent nationally, here (in Central Province), poverty levels have largely been below 30 percent,” Ndebu explained.

To improve development and service delivery, the Constituencies Development Fund (CDF), where the central government allocates money directly to the grassroots for development, was launched in 2003. But analysts say it is ineffective.

The CDF allocates 75 percent of its resources equally across Kenya’s 210 constituencies, and the remaining 25 percent is allocated based on the poverty rate in particular constituencies.

“The problem with the CDF is that it is weak on equity. But under devolution, there is an equalisation fund designed to bring deprived areas to the level of the rest of the nation,” Ndebu said.

According to Ndebu, the centralised government’s insensitivity to “regional inequalities provoked people in the Coast Province to threaten secession. There is an overflow of feelings of exclusion and neglect by post-independence governments.”

Over the last year, the Mombasa Republican Council, a secessionist group in Mombasa, Coastal Province put pressure on the government to address their grievances and called for separation from the rest of the country.

Government statistics show that Mombasa is among the leading contributors of national revenue because it lies along the Indian Ocean, yet locals claim to enjoy few benefits from the high revenue generation of the town.

“Devolution will improve efficiency in the allocation and execution of resources, equity, citizen participation and even the empowerment of citizens,” Ndebu said.

Too much power vested in the executive under a central government has done little to mitigate nepotism and corruption. Consequently, millions of shillings have either gone unaccounted for or have been stolen by the government.

The government Kazi Kwa Vijana or Jobs for Youths initiative is one such example of where funds intended for job creation were stolen. The country’s Free Primary Education Fund was also rocked by allegations of the misappropriation of funds. In October 2011, the government was forced to refund the United Kingdom’s Department for International Development (DFID) one million pounds (1.53 million dollars) in unaccounted-for aid.

In an August 2012 interview with Kenya’s Standard newspaper, U.K. DFID Minister Stephen O’Brien was quoted as saying: “We were deeply shocked at the extent of fraud in the Kenyan government’s education programme and have not provided aid through the government of Kenya since March 2010.”

Ndebu said that a centralised system of governance “was too removed from the ordinary people to efficiently scrutinise the spending of public resources.” It is hoped that with the devolved system of government there will be closer oversight.