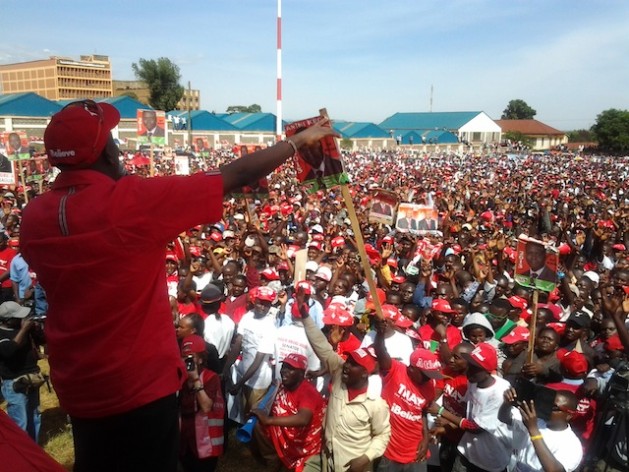 Uhuru Kenyatta rallying in one of his strongholds in Nyeri County, Central Kenya before the elections. Credit:Miriam Gathigah/IPS

NAIROBI, Mar 10 2013 (IPS) - Kenyans may have elected as president a man wanted by the International Criminal Court for war crimes, but political analysts here say that Uhuru Kenyatta’s presidency will not have significant implications for the country’s international standing just yet.

“World leaders will work to follow their interests. In politics, interests override all else and Kenya is too significant an East African nation to be ignored. It’s the big brother of East African nations in every aspect,” James Mwai, a political analyst, told IPS.

The president elect and his running mate, William Ruto, are both wanted by the ICC for crimes against humanity in the 2007-2008 general elections where an estimated 1,300 people were killed, at least 600,000 people displaced and property worth millions of dollars destroyed.

Kenyatta’s win makes him the second sitting African president, along with Sudan’s Omar al-Bashir, wanted for crimes by the ICC. Kenyatta’s indictment raises the possibility of difficult diplomatic relationships with the West as the United Kingdom and the European Union have strong policies against relationships with ICC indictees.

The United States also warned ahead of the elections that a Kenyatta victory would have consequences.

But Mwai said that China would work with Kenyatta.

“China will welcome Kenyatta with open arms and its populace may well provide an alternative market for Kenya’s export. Still, the U.K. does a lot of business in Kenya,” Mwai said.

He added that Kenyatta was still a suspect who had promised to cooperate with the ICC.

“Should this position change, then we have reason to be concerned,” Mwai said.

The election saw the highest ever number of Kenyans turn out to make their mark on Mar. 4 – about 86 percent of the 14.3 million registered voters. 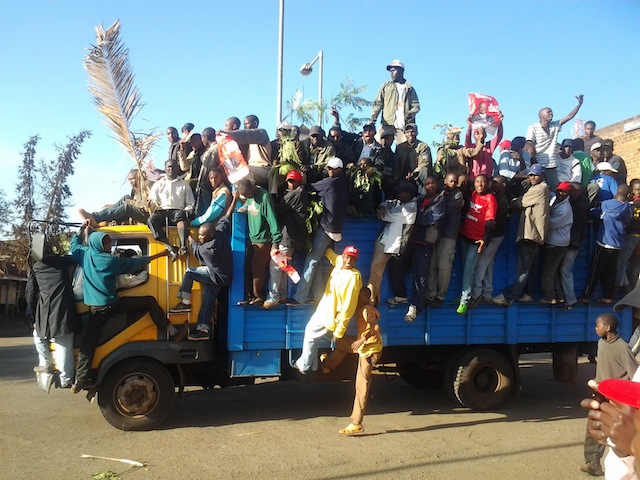 Vincent Kimosop, chief executive officer of local NGO the International Institute for Legislative Affairs, told IPS that the elections showed “that Kenya has made leaps as a democracy.”

“Look at the numbers, the gap between Odinga and Kenyatta is telling. The people have spoken and it is clear that Kenyans are not looking for affirmation from the West. The calm we have experienced throughout the week is another indication that we are moving forward,” he said.

Mutahi Ngunyi, a well-known political scientist, said that Kenyans voted for a Kenyatta government because they believe he will co-operate with the ICC and if he fails to do so “they can always impeach him in accordance with the law.”

“The West has no choice but to work with Kenya,” he told IPS.

But Simon Ngugi, a legal expert, is not so certain.

“If the truth be told, no one wants to be photographed shaking the hand of an ICC indictee. But Kenyans have spoken loud and clear. There are Kenyans who believe that the ICC is a partial and political court, and see it as a sign of continued oppression by the West,” Ngugi told IPS.

Java Bigambo, a political analyst with Interthoughts Consulting, a consultancy on governance, leadership and policy, wondered whether United Nations agencies offices in Kenya would close down.

“It may be awkward for the regional U.N. offices. Will they shut down to respect international law?

“This win raises speculation about whether the president and his deputy will actually cooperate with the ICC, and if they do, the nature of this interaction raises more questions than answers,” said Bigambo.

A presidency to heal divisions?

But Mwai said that that many had underestimated the impact of the political partnership between Kenyatta and Ruto.

Together, Kenyatta and Ruto represent two of the country’s biggest ethnic groups. Kenyatta is Kikuyu, and Ruto is Kalenjin. The two communities have shared a bitter, violent and painful past, which includes fighting against each other in the 2007-2008 post-election violence.

“Kenyatta and Ruto, previously bitter adversaries, have had to forge a strong political relationship for their own self-preservation,” he said.

Bigambo said that Odinga would have had both Kenyatta and Ruto tried for war crimes, had he won.

Kenyans who celebrated Kenyatta’s victory on Mar. 9 told IPS that they hoped that it would lead to peace-building among the country’s different ethnic groups.

Maggie Kamau, from Eldoret in the Rift Valley province, a region that experienced the worst of the 2007-2008 post-election violence, stood in the queue all day on Mar. 4 to vote.

“Kenyatta’s win will bring healing to the bedevilled Rift Valley region. Ruto will safeguard the interest of his people and Kenyatta’s. Together, with time, they can resolve historical injustices that have caused bloodshed and destruction between the two communities,” Kamau said.

It was expected that once Kenyans had cast their vote it would take less than 48 hours before the winner was announced.

However, the IEBC was faced with a myriad of challenges that delayed the announcement of the presidential results for five days.

Because of the numerous technical issues it faced with the electronic counting, on Mar. 6 the IEBC announced that it would disregard provisional results streamed electronically in favour of the manual system. While the move was in accordance with the country’s constitution, not everyone was happy.

Odinga told the media that there was a “conspiracy” to have the electoral system fail and that the IEBC had kicked his party agents out of the national tallying centre and had not allowed them to verify the results.

On Mar. 9, minutes after Kenyatta walked out of the IEBC’s national tallying centre as president elect with his official certificate of the results, Odinga made the announcement to the media and refused to concede defeat.