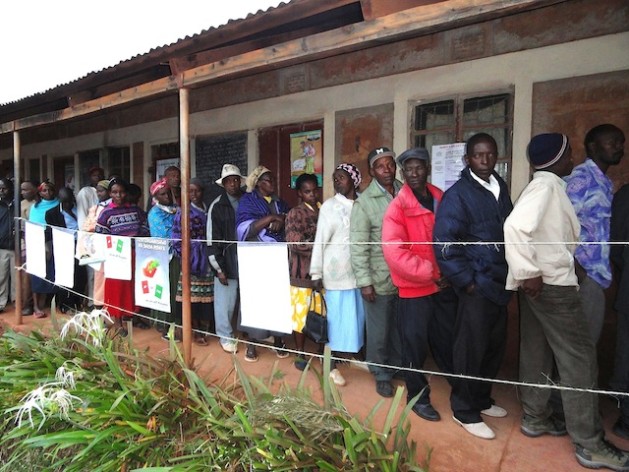 Though Kenya's polling stations officially opened at 6 am this morning, voters were already queuing two hours prior to the start of voting. Pictured - the Moi Avenue Primary polling centre in Nairobi where one of the longest queues has been reported. Credit: Miriam Gathigah/IPS

NAIROBI , Mar 4 2013 (IPS) - On Monday, Mar. 4, Betty Amollo was one of the millions of Kenyans who turned out in large numbers to cast her ballot in the country’s first general election since the 2007 disputed polls left almost 1,200 people dead and displaced 600,000 in the resultant inter-ethnic violence.

Though polling stations officially opened at 6 am this morning, voters were already queuing two hours prior to the start of voting. Amollo was one of them.

“I was in the queue at 4 am, but I voted only at 11 am. There were some technical hitches with the biometric voter registration system, which kept going on and off,” Amollo told IPS.

The blaring sounds of vuvuzelas (plastic blow horns) resounded across urban centres in this East African nation as enthusiastic voters roused fellow Kenyans from their sleep early Monday. Virtually all businesses across the country remained closed, except for the few restaurants that remained open to serve the voters.

Long queues of registered voters snaked around the usually busy Nairobi streets. Many had to patiently wait for hours as the biometric voter registration system, which identifies registered voters through reliable fingerprint and facial technology, experienced technical glitches in some areas.

“The long queues remind me of the 2002 general elections when we voted overwhelmingly for change. In a landslide, we ousted Moi’s 24-year-long presidential regime,” said Amollo, who was voting in Kibera, Nairobi. She was referring to former President Daniel Arap Moi’s largely dictatorial rule from 1978 to 2002.

If the queues of voters are anything to go by, it is clear that Kenyans are voting to ensure a decisive victory in this election, according to political analyst Peter Otondo.

“Based on the long queues witnessed today, it is obvious that Kenyans are gunning for a decisive win to avoid a repeat of the past (where everyone did not vote),” he told IPS.

Four million registered voters did not turn up to vote in the 2007 elections, the now-defunct Electoral Commission of Kenya said at the time.

According to the 2007 electoral rules, the candidate with the highest number of votes was declared president.

“The 2007 absentee voters were largely blamed for the disputed presidential poll results since the (winning) margin was too small,” Otondo said.

In 2007, current Prime Minister Raila Odinga ran for the presidency and was defeated by current outgoing President Mwai Kibaki by a mere two percent of the vote.

But the rules have changed for this election. In order for a candidate to be declared president, he or she is required to win 50 percent plus one vote of the overall votes cast. In addition, the candidate is also required to win 25 percent of the vote in the majority of Kenya’s counties.

In this election Odinga is also running for the presidency and his current main rival is deputy Prime Minister Uhuru Kenyatta, a man wanted by the International Criminal Court for war crimes. Kenyatta, a Kikuyu, has been accused of funding retaliatory attacks on the Kalenjin and Lou communities. 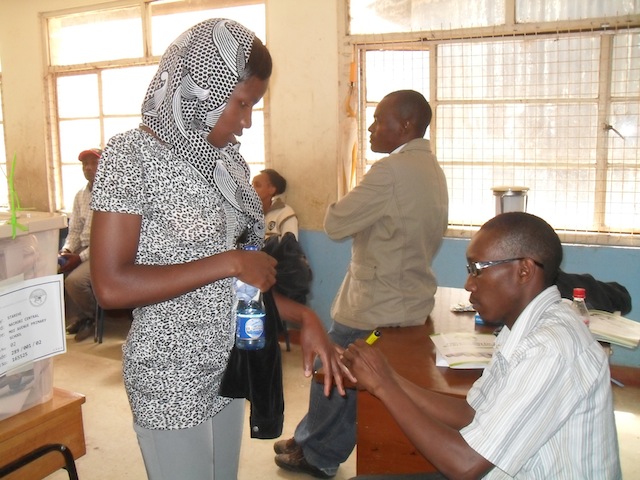 A woman at the Moi Avenue Primary School voting station in Nairobi has her left index finger marked with indelible ink by an IEBC officer, to show that she has voted. Credit: Miriam Gathigah/IPS

Voting was also extended in the Coast Province, where it is alleged that the Mombasa Republican Council (MRC), a secessionist group, intimidated voters. Suspected MRC members killed nine people in separate incidents in the region, including police officers and a presiding officer at Chumani tallying centre in Kilifi North Constituency, on Mar. 3, according to Coast provincial police officer Aggrey Adoli.

But these isolated incidents did not deter people from voting. While by the end of voting on Monday, the IEBC estimated that 70 percent of the country’s 14 million registered voters had turned out, adding that the figure could be higher as many polling stations had extended their hours.

Joyce Nyambura, a registered voter in Kiambu County, Central Province, was optimistic that Kenyans would not only vote peacefully but would accept the outcome of the election.

Nyambura lost her market stall business in Mombasa, Coast Province in 2007, at the height of the post-election violence. She has since relocated to Central Province, where she is struggling to rebuild her life.

“I escaped death and serious spinal injury after I tripped and fell (in the riots), and was trampled on by people fleeing for their lives,” she told IPS.

But she said that she felt that this election would be peaceful because “Kenyans learnt in pain, we all lost last time.”

This time around Kenyans are not keen to provoke violence, according to Jennifer Riria, the head of Tuvuke, an initiative for a peaceful and fair electoral process in Kenya.

“Civic education has borne fruit, and Kenyans are embracing a peaceful approach to the elections. There is more awareness that the election is just an event, and there is life beyond it,” she told IPS.

Still, Kenya’s security agencies were not leaving anything to chance. Police patrols were intensified, especially in areas that were most affected by the 2007-2008 post-election violence.

In Nairobi, armed police officers were a common sight throughout the day.

“Over 99,000 security personnel are already manning the more than 33,400 polling stations, to monitor incidents of election offences,” the chair of the IEBC, Isaack Hassan, told IPS.

The National Elections Centre, where national tallying is taking place for the presidential race, is also under a heavy security presence.

In the 2007 election thousands converged in and outside the tallying centre, where the results were being counted by hand. What should have been an orderly and transparent forum to announce results quickly deteriorated into a shouting match between electoral officials and political party agents at the time.

The situation is significantly different in this election, as the IEBC has adopted new technology to count the votes.

“The IEBC has also embraced electronic streaming of results, which has improved transparency and accountability in this election,” statistician Charles Onyango told IPS.

But whatever the outcome, Dominic Mango, a security guard at Brinks Security Company in Nairobi, was sure it would be a peaceful one. He told IPS: “This is a competition and whoever wins will reflect a win for all Kenyans.”