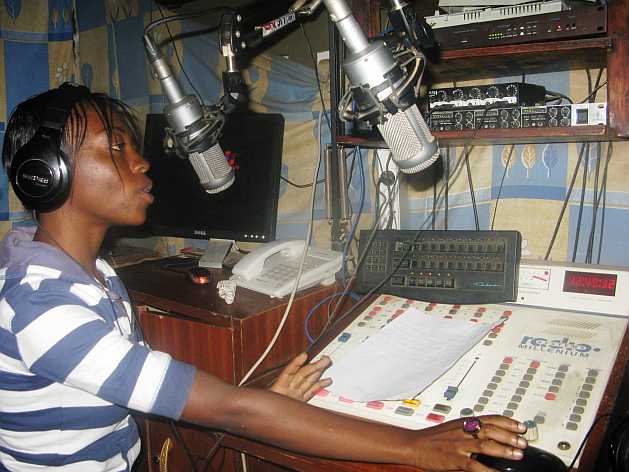 Nancy Mweu, of Pamoja Radio, says she has been able to change the lives of women through her radio programme. Credit: Isaiah Esipisu/IPS

NAIROBI, Mar 12 2012 (IPS) - In a Kibera-bound mini-bus taxi, the driver changes the station just as he turns onto Ngong Road, kilometres away from the Kenyan slum. He tunes into Pamoja Radio 99.9 FM, a local community radio station that broadcasts only in Kibera.

“Wacha tupate ushauri,” the driver tells the passenger next to him in Swahili. Translated it means: “Let’s get some advice.”

“Whenever I tune in to Pamoja Radio, I learn something new, a new life lesson. They discuss family issues that are familiar to most of us, they address issues of unemployment, and mostly advocate for self-employment,” said the mini-bus taxi driver, adding that on the weekend he listened as a local young man explained how he had raised himself out of poverty using a loan from a microfinance institution.

It is mid-morning so local presenter Asmani Maringa is on the air, and the song emanating from the airwaves is one of the most popular Swahili songs in the country called “Umejuaje Kama si Umbea? ” or “How do you know it’s not gossip?”

It is from a music genre called Taarab, which is popular in Kenya and Tanzania.

As the song fades out, Maringa’s voice comes in re-introducing the theme of the day. “In case you have just tuned in, we are discussing peace in families. I want to understand why wives in some parts of the country have been battering their husbands of late,” he announced.

The topic, though emotive, leaves smiles on the faces of the passengers of the mini-bus taxi, or Matatu as they are locally called. The subject hit news headlines three weeks ago when a number of men from Nyeri in Central Province were hospitalised after their wives allegedly battered them.

“We use popular music genres to introduce subjects that promote peace among the residents of Kibera slum,” said Adam Hussein, the founder and managing director of Pamoja Radio.

“Apart from the news, all other programmes must have a theme for discussion, with a provision for listeners to contribute through phone calls, Facebook and short message services (SMS),” added the former journalist.

“Pamoja” is a Swahili word meaning “together”. The radio station was founded in 2007 to promote unity among those who live in Kibera and economically empower the youth here through education, information and entertainment.

The station is operated by nine volunteers from Kibera, and broadcasts over a radius of two kilometres.

Internews Network in Kenya, a non-governmental organisation that is dedicated to providing journalism training, has been instrumental in offering free instruction on the broadcast medium to the volunteers.

Following the post-election violence that rocked the country towards the end of 2007, the station had its work cut out for it trying to bring peace and understanding to the area. After incumbent President Mwai Kibaki won the elections, opposition candidate Raila Odinga’s supporters claimed electoral fraud. More than 1,500 people were killed in the resultant violence and over 500,000 displaced.

“Given that Kibera is in the constituency where Odinga comes from, it was one of the most volatile areas where houses were set ablaze, human beings were butchered, and properties were destroyed,” said Hussein.

At the time, the management of Pamoja Radio dedicated most of its airtime to peace messages broadcast in the various local languages represented in Kibera.

“We managed to quell the violence to some extent. We used to invite the most furious residents who were eager to express their opinions to the public through a channel like radio. We promised to give them airtime to do so. But upon arrival at the station, we put them through a short counselling session, after which we convinced them to go on air and preach peace to the rest of the community,” said Hussein.

As a result, Pamoja Radio has since developed programmes and activities geared towards promoting peace at the community and family level.

With support from the United States Agency for International Development, the station also sponsors football tournaments in Kibera “as a means of using sports as a tool to promote unity,” said Hussein.

Apart from sports, the station focuses on issues that affect the day-to-day lives of Kibera residents.

Nancy Mweu hosts a programme called Mwanamke ni Mwangaza, which is Swahili for “a woman is a source of light.” It is a live call-in programme with guests who are renowned members of society, or who have gone through particular experiences that Mweu feels need to be shared with other residents.

“Through real life experiences in the programme, I have been able to convince women that despite their state of poverty, they can still make it in life. That family planning works, and that being HIV-positive does not mean a death sentence,” said Mweu.

Habil Esiroyo Chitwa, a radio repairer in Kibera, is one such listener. He told IPS that until he listened to a programme on HIV in December 2011, he never bothered getting tested for the virus.

“My wife had been tested when she was pregnant, and she had turned out to be negative. But one day, a couple was invited to Pamoja Radio, where we learnt that the man was HIV-positive, while the wife was negative. But they had a kid. This got me thinking and as a result I had to go for the test despite the fact that my wife had tested negative,” said Chitwa.