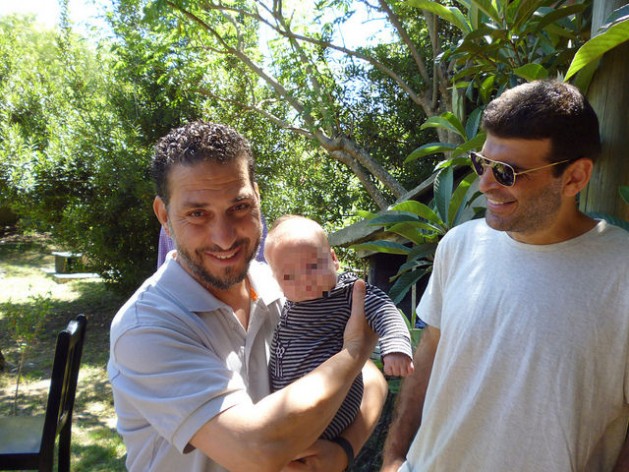 MONTEVIDEO, Dec 31 2014 (IPS) - In the summery afternoon of a beachside neighbourhood not far from the Uruguayan capital, nothing could sound more unusual than the Muslim call to prayer chanted by Tunisian Abdul Bin Mohammed Ourgy, a few days after being freed from the United States military prison in Guantánamo, Cuba.

One of the first acts of Ourgy and the five others who arrived in Uruguay Dec. 7, after 12 years behind bars, was to figure out their new coordinates and find the orientation to Mecca, the Saudi city faced by the Muslim world during prayer.

Political perversities have placed on their shoulders the burden of demonstrating that prisoners at Guantánamo can be freed without the risk of turning into what, according to Washington's latest version, they never were: terrorists.

It is not surprising that anybody subjected to Guantánamo’s living conditions would find a lifeline in religion, homeland traditions and family memories.

But religion has lost none of its relevance for these men since they were suddenly introduced to a strange culture – Western but not U.S. or European— with a language different from both their native Arabic and from the English they were forced to speak with their jailers in Guantánamo.

The group of four Syrians, a Tunisian and a Palestinian is still bound by the silence imposed by Washington regarding their experiences in the prison. IPS met with them for the second time Dec. 30 in the house where the Syrians are living in downtown Montevideo. A few are already speaking some Spanish and struggling to adjust to their new reality.

Contacts with relatives have been established and the men are now looking for ways to reunite with their families, with the support of the Uruguayan government.

Syrian Jihad Deyab – well known because he protested his detention for years through hunger strikes and litigated against the U.S. force-feedings— is gaining strength and hoping to join his wife and three children soon.

His lawyer, Cori Crider, told IPS that “we had appealed Judge Gladys Kessler’s decision denying us relief from various force-feeding practices, when he was released. We have now asked the Court of Appeals to vacate that judgment on the basis that the government ceased its illegal conduct by transferring him, but that request hasn’t been decided.”

Yet “Deyab is still part of the case in which we say the video-tapes of his force-feedings should be made public,” led by 16 media organisations under the First Amendment of the U.S. constitution, and “he very much supports what the media are trying to do,” she said.

After the shock of liberation, the six men are still struggling to fully understand where they are and to match as much as possible their beliefs and expectations for a new life with Uruguay’s social norms.

Difficult, but necessary, is to reconcile the diverse social and political expectations and interests surrounding the group since the government of José Mujica decided to host them as refugees on humanitarian grounds.

With just 3.3 million people, Uruguay is “almost empty,” Palestinian Mohammed Tahamatan told IPS. He finds this is a wonderful fact.

This country was made by successive migratory waves, but it didn’t receive many new immigrants for a long time. On the contrary, it has tended to lose its own population, particularly through young people chasing better opportunities abroad.

However, the economic prosperity of the last decade attracted a modest but constant influx of foreigners: Spaniards, Peruvians, Dominicans, Indians and Pakistanis. This is something new for a society which has become excessively homogenous and whose representations of the Middle East and the Muslim world are still heavy loaded with exoticism.

“Exoticism is not good… and it comes with a certain degree of fear of Islam,” Javier Miranda, human rights director for the Presidency of Uruguay, told IPS. Awareness of this “is part of our own development as a society,” he added.

Social expressions of solidarity with the 42 refugees from the Syrian civil war who arrived in Uruguay last October, and those shown to Guantánamo’s former inmates while they were visiting a street market, are genuine.

But it is yet to be seen how much of it is determined by this sense of exoticism or by the international attention this country has gained for adopting these policies. Furthermore, as the beneficiaries are a small group of people, such solidarity entails a very low economic and social cost.

Such a reception is absent for the Peruvian, Bolivian or Dominican immigrants who escape from poverty in their countries and are not flagged by any governmental campaign. Some of them have even been victims of labour exploitation and trafficking.

For the governing party, the centre-left coalition Frente Amplio, it is vital to ensure the success of the resettlement schemes of the Syrian conflict refugees and the former Guantánamo inmates.

In both cases, Mujica cited the goal of “setting an example” for neighbouring countries. A successful integration would silence critics and ease fears of perceived or real risks. Thus controlling developments and avoiding outbursts become crucial.

Since the release earlier this month of four inmates who were repatriated to Afghanistan, there are now 132 prisoners in Guantánamo, 63 of them cleared for release. Out of the remaining 69, 10 are currently or have been on trial and 59 are labelled as dangerous by authorities who, nevertheless, recognise there is inadequate evidence to prosecute them in court.

At least one of the six men transferred to Uruguay is willing to advocate for more South American countries hosting Guantánamo’s inmates, IPS learned.

The Uruguayan experiment is also subject to U.S. expectations. The most paradoxical is to avoid the outcome that persons unfairly imprisoned for many years become, once free, active enemies of the U.S.

The same government who produced their criminal files declared in 2009 there was no evidence against them and they could be released.

The same government which forced them to fly to Montevideo shackled and blindfolded sent to the Uruguayan authorities a letter ensuring that “there is no information that the above-mentioned individuals were involved in conducting or facilitating terrorist activities against the United States or its partners or allies.”

The same government campaigning for the hosting of further Guantánamo inmates by third countries has a Congress which has banned this possibility in its territory.

Some local analysts in Uruguay have questioned which of the two versions should be believed. If Washington lied in the files, it could be lying now again, they argue.

This analysis ignores a basic guarantee of the rule of law: that it is guilt, not innocence, which must be proven.

The “war against terror” led by the U.S. since 2001 is seriously discredited in Uruguay. But its narrative has coloured public opinion. People have not expressed outright rejection of the six freed men, but opinion polls carried out this year show support of just 20 per cent for their arrival.

Washington insisted on banning any image of the release. Yet the world has already seen the first pictures of these men in the street, at the beach or holding a baby, as featured in this story.

These photos counterbalance the only produced so far by the U.S. military apparatus: the exasperated faces of the inmates with shaved heads and long beards.

Dressed like any Uruguayan men, it would be so easy for them to just blend into the crowd and live their lives in privacy. But they are media celebrities and subjects of surveillance for the intelligence services of a number of countries.

Under all these circumstances, nobody should expect 100 per cent success, not the least because they are traumatised. However, political perversities have placed on their shoulders the burden of demonstrating that prisoners at Guantánamo can be freed without the risk of turning into what, according to Washington’s latest version, they never were: terrorists.