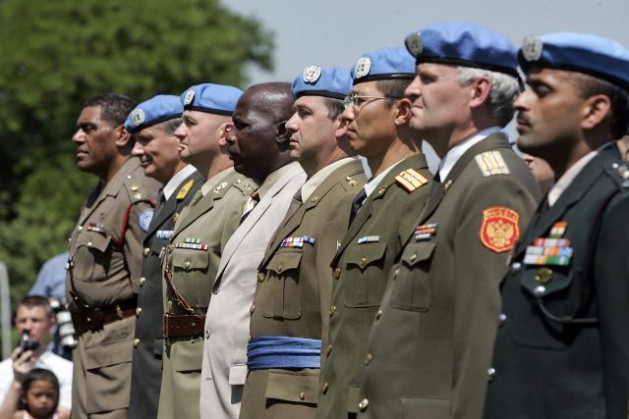 Some of the 43 military and police officers from 27 countries who received peacekeeping medals from Jean-Marie Guéhenno, Under-Secretary-General for Peacekeeping Operations. Credit: UN Photo/Eskinder Debebe

UNITED NATIONS, Dec 2 2014 (IPS) - When Secretary-General Ban Ki-moon named an international panel to review peacekeeping operations last October, the announcement was greeted with bitter criticism because it lacked even a semblance of gender balance: only three out of 14 members were women.

And perhaps adding insult to injury, the announcement was made on Oct. 31, the 14th anniversary of the historic Security Council resolution 1325 which underlined the importance of women’s equal participation and full involvement in the maintenance and promotion of peace and security.

“The timing of your announcement is a slap in the face to women working for peace the world over,” complained Stephen Lewis, a former deputy executive director of the U.N. children’s agency UNICEF, and Paula Donovan, both co-directors of AIDS-Free World.

In three strongly-worded letters to the Secretary-General, Lewis and Donovan said: “In one stroke, you have succeeded in making a mockery of Resolution 1325.”

“In one stroke,” the letter further added, “you have repudiated the importance of gender equity in the appointment of high-level panels.”

And in one stroke, “you have declared to the world your view that there are no women to be found anywhere – not in politics, academe, diplomacy, civil society, or among Nobel laureates – who are qualified enough to satisfy the requirements of a panel on peace operations.”

The fallout was almost instantaneous – and mostly positive.

Secondly, on Monday, the secretary-general, apparently responding to criticism, also doubled the number of women in the U.N. panel on peacekeeping: from three to six.

The three additional women to the Panel are: Dr. Marie-Louise Baricako from Burundi, Dr. Rima Salah from Jordan and Radhika Coomaraswamy from Sri Lanka.

In addition, Ameerah Haq of Bangladesh, the current under-secretary-general for the Department of Field Support and an original member of the panel, will serve as vice-chair following her retirement from the United Nations on Feb. 1, 2015.

A statement released Monday said “the Secretary-General is confident the addition of three eminent women and the role Ms. Haq will play as Vice-Chair will not only bring gender balance to the panel, but also enrich its work, particularly on issues relating to women, peace and security.”

Asked for his comments, Ambassador Anwarul Karim Chowdhury, long considered the prime initiator and “father of the 1325 Security Council resolution”, told IPS: “It is welcome news – at least as a step forward towards our goal of 50-50 equality.”

He said listening to the voice of civil society is considered meaningful in making U.N. decision-making more broad-based and people-oriented.

When the initial criticism surfaced, U.N. deputy spokesman Farhan Haq said, “I guess this is one case where we have to just make a very sincere apology.

“We try as hard as we can to get the right gender balance and the right regional balance for these very large panels, and sometimes it’s a question of availability,” he added. “But when we make a mistake on that, you’re absolutely right, that’s a low number, and well have to do better.”

Chowdhury said: “Personally, I believe a woman should have been made the co-chair and not vice-chair of the Peace Panel.”

A key objective of Security Council’s history-making resolution 1325 is to achieve women’s equality of participation at all decision making levels, he added.

Also, it makes sense to have the two top persons of the panel representing two different geographic regions of the world, said, Chowdhury,, a former U.N. Under-Secretary-General and High Representative.

“But his claim that an 11-to-6 ratio of men to women was enough to ‘bring gender balance’ were the words of a leader who is either obdurate or uncomprehending,” she added.

Gender parity could have been achieved with a stroke of his pen; instead, he chose to keep women in the minority at 35 per cent,
she added.

“His actions raise some hope, a great deal of concern, and a clear warning about the need for constant vigilance and unrelenting pressure by proponents of women’s equal rights,” said Donovan.

Barbara Crossette, a former New York Times U.N. bureau chief, told IPS the persistence of AIDS-Free World in focusing wider outrage over the startling imbalance of the original panel on peacekeeping has paid off in a remarkably short time – by U.N. standards.

And the elevation to vice-chair of Ameerah Haq, one of the U.N.’s most qualified and effective officials over a nearly four-decade career, will go a long way in remedying the situation, said Crossette, currently the U.N.correspondent for The Nation and a member of the Council on Foreign Relations.

She singled out Haq’s services in conflict and post-conflict countries which gives her a broad global vision.

To take one example from the new panel members – Radhika Coomaraswamy has been not only the U.N.’s point person on violence against women and the perils facing children in armed conflict, but also director of the International Center for Ethnic studies in Sri Lanka.

She held that position during an intense period of terrorism that cost the life of her predecessor in that position, Neelan Tiruchelvam, the country’s leading human rights lawyer, said Crossette.

Mavic Cabrera-Balleza, international coordinator for the Global Network of Women Peacebuilders, a programme partner of the International Civil society Action Network, told IPS, “Our sincere hope is these appointments will not become two isolated efforts to please the complainers.

“We want a 50-50 representation not just this one time but all throughout the decision-making structures of the United Nations, ” she said.

She also called for a vetting mechanism for the selection of members of key panels and committees and key positions in the U.N. with a civil society representation.

“The problem with many high-level appointments in the U.N. is that they are based on political influence of some member states. They are pet nominees of influential member states who get the appointments – and that is why we have unqualified people in some of these positions,” she declared.

“We in civil society have delivered the message like a broken record. We’ve been telling the U.N. for years to walk the talk, and lead by example on matters of gender equality. I sincerely hope this will be the real tipping point,” she noted.

Meanwhile, in a statement released Tuesday, AIDS-Free World had the last word: “An 11-man, 6-woman panel, with a man as chair and a woman as vice-chair, does not bring gender balance by anyone’s reckoning.”

The High-level Independent Panel on Peace Operations will be monitored closely by civil society, the group said, and transparency will be expected in every aspect of its work.

“The Secretary-General must do better,” it declared. “The world’s women will hold him to account.”