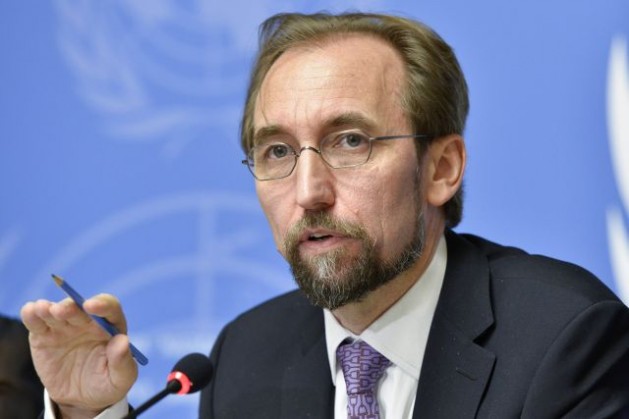 Zeid Ra’ad Al-Hussein, recently appointed UN High Commissioner for Human Rights, notes that few countries will admit their state apparatus has been practising torture, even when the scars are all too visible on the victims who manage to escape. Credit: UN Photo/Jean-Marc Ferré

UNITED NATIONS, Dec 11 2014 (IPS) - The timing was inadvertently impeccable as two stinging reports on harsh interrogation techniques – by the Central Intelligence Agency (CIA) in the United States and former military regimes in Brazil – were released on the eve of the 30th anniversary of the U.N. Convention Against Torture.

Not surprisingly, U.N. spokesperson Stephane Dujarric was peppered – and metaphorically tortured – with a barrage of non-stop questions on Secretary-General Ban Ki-moon’s response to the charges.

"They knew they were outside the lines, they concealed it from their own people, and yet no one will be held accountable." -- Prof. Vijay Prashad

“The secretary-general believes the prohibition of torture [by the U.N. convention] was absolute and non-negotiable,” Dujarric told reporters at Wednesday’s noon briefing.

But the questions seemed never ending – even as he refused to be pinned down.

“No, I do not believe the secretary-general had direct communication with anyone in the U.S. administration [after the report was released Tuesday].”

“No, no one is taking the report as gospel. And it is not for the secretary-general to say it is a definitive report,” he shot back. “There is an open debate – and this is the start of a process,” he added.

The release of the two reports – by a U.S. Senate committee on the CIA’s interrogation tactics, and also the systematic human rights violations in Brazil as revealed in a report by the country’s National Truth Commission – also coincided with Human Rights Day, which the United Nations commemorates annually on Dec. 10.

He said the report by the U.S. Senate Intelligence Committee shows they were well aware the revelations “stink”.

“There is a very telling section [in the report] where they say that [then U.S. Secretary of State] Colin Powell must not be informed, because if he is, he would blow his stack,” said Prashad, who has written extensively on international politics and is the author of 15 books.

“They knew they were outside the lines, they concealed it from their own people, and yet no one will be held accountable,” he added.

The United States ratified the 1987 U.N. Convention Against Torture back in October 1994 and Brazil in September 1989.

Responding to the two reports, the U.N. High Commissioner for Human Rights, Zeid Raad Al Hussein, urged the U.N.’s 193 member states to act unequivocally in their effort to stamp out torture.

He said the U.S. report shows torture is still taking place in quite a few of the 156 countries that have ratified the Convention and have domestic legislation making torture illegal.

“To have it so clearly confirmed that it was recently practised as a matter of policy by a country such as the United States is a very stark reminder that we need to do far, far more to stamp it out everywhere,” he continued.

This has been true at the best of times, he added.

It is particularly true during this period of rising international terrorism, when it has shown a tendency to slither back into practice, disguised by euphemisms, even in countries where it is clearly outlawed, said Zeid, a former permanent representative of Jordan to the United Nations.

However, he “warmly welcomed” the publication of the Senate Committee’s summary report on the CIA’s Detention and Interrogation Programme, as well as the report of Brazil’s National Truth Commission which documents the extensive use of torture, among other gross and systematic human rights violations, over a 42-year period, including the 1964-85 military dictatorship.

The Brazilian Commission, which was established in May 2012, investigated the serious human rights violations that occurred between 1946 and 1988 – the period between the last two democratic constitutions in Brazil.

These violations include unlawful imprisonment and torture; sexual violence; executions and subsequent concealing of corpses; and enforced disappearances.

“When practiced massively and systematically against a population, these violations become a crime against humanity,” the report said.

The report on the CIA said terrorist suspects, after the Sep. 11, 2001 attacks on the United States, were subjected to sleep deprivation (as long as a week), water-boarding, rectal-hydration, with some prisoners “literally hooked like a dog that had been kenneled.”

The CIA defended its techniques by arguing that its brutal treatment of suspects was aimed at protecting the country from further terrorist attacks.

Zeid said: “Although there are very significant differences between these two exceptionally important reports, not least in their scope and the periods they cover, I commend the governments of Brazil and the United States for enabling their release.”

Few countries, he pointed out, will admit their state apparatus has been practising torture, and many continue shamelessly to deny it – even when it is well documented by international human rights treaty bodies, and the scars are all too visible on the victims who manage to escape.

“While it will take time to fully analyse the contents of these two landmark reports – and I do not wish to pre-empt that analysis – we can still draw some stark conclusions about the failures to eradicate this serious international crime, for which there should be no statute of limitations and no impunity,” Zeid declared.

He also said one question neither report can answer on its own is how both countries will fulfil their obligation to ensure accountability for the crimes that have been committed.

“If they order, enable or commit torture recognized as a serious international crime they cannot simply be granted impunity because of political expediency.”

When that happens, he said, “we undermine this exceptional Convention, and as a number of U.S. political leaders clearly acknowledged yesterday, we undermine our own claims to be civilized societies rooted in the rule of law.”