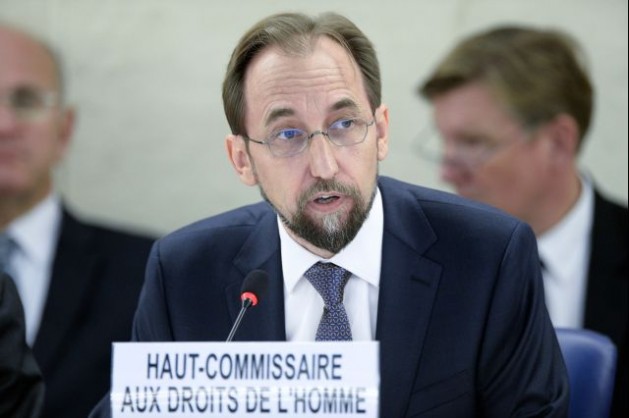 UNITED NATIONS, Oct 16 2014 (IPS) - After six weeks in office, the new U.N. High Commissioner for Human Rights (UNHCHR) Zeid Ra’ad al-Hussein of Jordan launched a blistering attack on member states for insufficient funding, thereby forcing operations in his office to the breaking point “in a world that seems to be lurching from crisis to ever-more dangerous crisis.”

“I am already having to look at making cuts because of our current financial situation,” he told reporters Thursday, pointing out while some U.N. agencies have budgets of over a billion dollars, the office of the UNHCHR has a relatively measly budget of 87 million dollars per year for 2014 and 2015.

"I have been asked to use a boat and a bucket to cope with a flood." -- U.N. High Commissioner for Human Rights Zeid Ra'ad al-Hussein

“I have been asked to use a boat and a bucket to cope with a flood,” he said, even as the Human Rights Council and the Security Council saddles the cash-strapped office with new fact-finding missions and commissions of inquiry – with six currently underway and a seventh “possibly round the corner.”

“They call them to a fire but don’t give them the water to extinguish the fire and then blame the firefighters for their failure,” he said.

Martens welcomed the “the powerful statement” by the UNHCHR, describing it as a wake-up call for governments to take responsibility and finally provide the necessary funding for the United Nations.

Martens said for many years, Western governments, led by the United States, have insisted on a zero-growth doctrine for U.N. core budget.

“They bear major responsibility for the chronic weakness of the U.N. to respond to global challenges and crises,” he added.

The Office of the UNHCHR depends on voluntary contributions from member states to cover almost all of its field activities worldwide, as well as essential support work at its headquarters in Geneva.

“Despite strong backing from many donors, the level of contributions is not keeping pace with the constantly expanding demands of my Office,” Zeid said.

Peggy Hicks, global advocacy director at Human Rights Watch, told IPS the dramatic gap between the demands on the U.N. human rights office and the resources it has available is unsustainable.

“It’s time for states to match their commitment to human rights by providing the resources needed for the High Commissioner and his team to do their jobs,” she said.

Renzo Pomi, Amnesty International’s representative at the United Nations, told IPS it is wrong that the office of the UNHCHR’s core and mandated activities are not fully funded from the U.N.’s regular budget.

This, despite the fact, – as the High Commissioner himself points out – human rights are regularly described as one of the three pillars of the United Nations (along with development and peace and security).

“That makes for a short pillar and a badly aligned roof. U.N. member states should make sure that its core and mandated activities are properly funded,” he added.

Singling out the cash-crisis in the World Health Organisation (WHO), Martens told IPS a recent example is the weakness of WHO in responding to the Ebola pandemic.

Due to budget constraints WHO had to cut the funding for its outbreak and crisis response programme by more than 50 percent in the last two years.

It’s a scandal that the fraction of the regular budget allocation for human rights is less than 100 million dollars per year, and that the Office of the High Commissioner is mainly dependent on voluntary contributions.

Human Rights cannot be promoted and protected on a mere voluntary basis.

He said voluntary, and particularly earmarked, contributions are often not the solution but part of the problem.

Earmarking tends to turn U.N. agencies, funds and programmes into contractors for bilateral or public-private projects, eroding the multilateral character of the system and undermining democratic governance, said Martens.

Therefore, member states must overcome their austerity policy towards the United Nations.

For many years Global Policy Forum has been calling for sufficient and predictable U.N. funding from governments, said Martens. In light of current global challenges and crises this call is more urgent than ever before, he added.

Zeid told reporters human rights are currently under greater pressure than they have been in a long while. “Our front pages and TV and computer screens are filled with a constant stream of presidents and ministers talking of conflict and human rights violations, and the global unease about the proliferating crises is palpable.”

He said the U.N. human rights system is asked to intervene in those crises, to investigate allegations of abuses, to press for accountability and to teach and encourage, so as to prevent further violations.

But time and time again “we have been instructed to do these and other major extra activities within existing resources,” said Zeid, a former Permanent Representative of Jordan to the United Nations.