UNITED NATIONS, Jan 3 2012 (IPS) - Weighed down by a 260-million-dollar cut in its budget for 2012-2013, the United Nations is bracing itself for a major austerity drive, including possible layoffs, salary freezes, reduction in official travel and drastic cuts in printed documents. 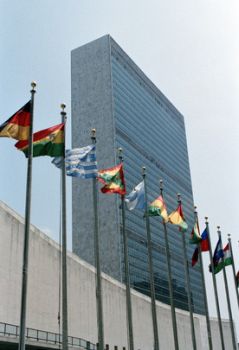 There are no indications so far of any posts being abolished at U.N. headquarters in New York. Credit: UN Photo/Milton Grant

The International Civil Service Commission (ICSC), a 15-member independent expert body mandated to regulate the working conditions of U.N .staffers numbering over 44,000 worldwide, is scheduled to hold a two-week session beginning Feb. 27 to look at the current salary structure of U.N. staffers – and the need for a freeze or possible cuts in the context of the reduced budget for the next biennium.

After a marathon session last month, the U.N.’s Administrative and Budgetary Committee (also known as the Fifth Committee) recommended a 5.15-billion-dollar budget for 2012-2013, compared with 5.41 billion dollars approved for the previous biennium.

A protracted debate between Western nations, led by the United States, and the 132-member Group of 77 developing nations left unresolved at least two key issues: should there be across-the-board budget cuts on programme managers? And should automatic annual pay increases for U.N. staff be eliminated or suspended?

Both proposals were prompted by the spreading global economic crisis which will, sooner or later, have an impact on funding for the world body – and specifically for the myriad U.N. agencies which depend on voluntary contributions, mostly from the United States and Western industrialised nations.

Addressing the General Assembly after the adoption of the budget last week, Secretary-General Ban Ki-moon said, “I am here to thank you for solidifying, with me, our compact to make the most of our resources – to cut fat – and to continue fulfilling every one of the critical global mandates entrusted to the United Nations.”

All budget years are tough, he said. “But this year was especially difficult. Governments and people everywhere are struggling. It is a time of global financial austerity.”

Barbara Tavora-Jainchill, president of the U.N. Staff Union in New York, told IPS that some of the proposals considered by the Fifth Committee were “thankfully not approved”.

In a letter to staffers last week, she commended the collective effort to stand united against any moves to penalise them.

“Thanks to your hard work and commitment,” she told staffers in the Secretariat, “it is our understanding that the draft approved by the Fifth Committee does not decrease our salaries, and does not take away the post adjustment earned a few months ago.”

Moreover, she said, there are no indications so far of incumbent (occupied) posts being abolished at headquarters in New York.

“Since this is very hard to read from the documentation, we will keep on monitoring the matter closely and, if we hear otherwise, we will act immediately. We could not have gotten this result was it not for our collective effort,” Tavora-Jainchill said.

She also pointed out “the effect of this simple act was amazing, since we were able to show to member states that we exist, that we are not political pawns, that we work seriously, give sometimes too much to this organisation, even our lives, and deserve respect.”

“We are grateful for the action of our colleagues at the other Secretariat duty stations, funds and programmes who, through their staff unions and associations, also worked strongly to stop this nonsense,” the letter added.

As the battle continues into 2012, the next General Assembly will discuss a number of important human resources issues, including mobility of staff from New York to regional offices.

In a letter to senior managers last April, the secretary-general hinted at deep cuts, including reduction of official travel, in favour of an increase in video conferencing; curtailment or suspension of consultancies; cutting down on printed reports in favour of electronic documents; and an overall reduction in overtime payments.

Additionally, he said he wants to “review” the use of libraries across the organisation – perhaps in anticipation of cuts or total elimination of these services – and charging fees for services provided by the Secretariat to the various U.N. funds and programmes system-wide.

“We must be realistic about the current economic climate,” he told senior managers last year. “Even the wealthiest nations are tightening their belts and cutting budgets. The United Nations must be no less disciplined. We cannot go about business as usual.”

Ambassador Joseph M. Torsella, U.S. representative to the United Nations on Management and Reform, told the Fifth Committee that the secretary-general took a bold first step – and some political heat – in calling for United Nations managers to tighten their belts.

“We applaud him for seeking to halt a 10-year trend of budget increases, and for courageously telling this organisation not what it wants to hear but what it needs to hear: these are not ordinary times,” he said.

“We see innovation: the Department of Public Information proposes to spend about 5.0 million dollars less than it did in 2010-2011 by introducing modern information management technologies, making wider use of the Internet and social media, and deploying online reporting and management tools.”

He also pointed out that since 2009, the Department of General Assembly and Conference Management (DGACM) has reduced the number of pages printed by the United Nations by 65 percent.

“That means that DGACM has saved, on an annual basis, a pile of paper 49 times the height of the Secretariat building,” Torsella said.

“We need to look no further than that pile of paper to know that reducing resources does not mean compromising mandates: the United Nations, like any organisation, can always do more with less. And doing so unleashes a cycle of creativity and dynamism, innovation and renewal.”

Pointing out the highlights of the 2012-2013 budget, a press statement from the U.S. Mission to the U.N. said the total budget of 5.15 billion represents the first time in 14 years, and only the second time in the last 50 years, that the General Assembly has approved a regular budget level below the previous biennia’s final appropriation (5.41 billion dollars in 2010-2011).

When factoring in the difference between the likely budget level based on historic patterns and the budget approved last week, this budget represents a savings to U.S. taxpayers of as much as 100 million dollars, Torsella added.

Under a system of mandated assessed contributions from the 193 member states, the United States is the largest contributor to the U.N. budget, accounting for about 22 percent.