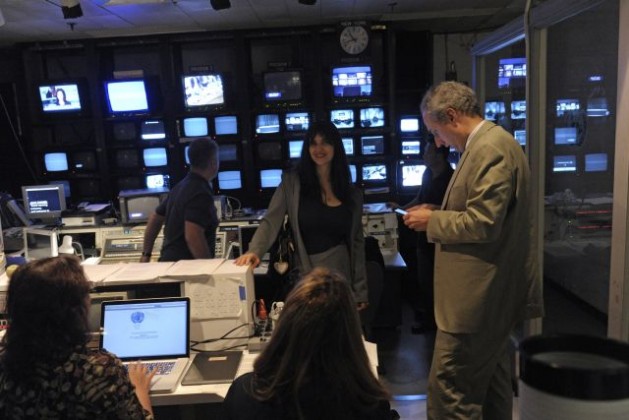 Behind the scenes at the UNTV studio where Secretary-General Ban Ki-moon was recorded answering some of the 5,000 questions sent to him via Twitter and Chinese network, Weibo. Mr. Ban’s response to the questions, some of which were asked on-air, was streamed live on Facebook, Livestream, Tumblr and UN Webcast. Credit: UN Photo/Mark Garten

UNITED NATIONS, Feb 5 2015 (IPS) - Formerly derided as the domain of time-wasting and self-obsession, social media has emerged as an unlikely shining light for international relations and social activism.

The trend has been dubbed ‘twiplomacy’ – Twitter diplomacy – with world leaders, diplomats and non-governmental organisations alike harnessing the people power of social media to amplify their own messages and goals.

“Social media is a megaphone. You won’t reach everybody, but it levels the playing field." -- Anna Nelson

“[Today] 84 per cent of governments have a Twitter presence. There are 130 heads of states and government on Twitter,” said Adam Snyder, global digital and social media strategist with the communications firm Burson Marsteller.

“It is giving people accessibility to their leaders. It takes activism and communicating with your government to a new level.”

Snyder was speaking on the results of his firm’s latest report, also titled ‘Twiplomacy,’ at the United Nations’ first ever Social Media Day on Jan. 30 in New York City.

That an entire day was devoted to the likes of Facebook, Tumblr and Twitter shows the degree to which the U.N. considers social media a tool for diplomacy and change.

“There’s the old-fashioned idea of diplomacy, having a hotline between one country and another. Now there’s a Twitter line between countries,” Snyder said.

The U.N.’s Social Media Day heard from diplomats, advocacy groups, strategists, executives and journalists on the effect of technology on political and social discourse.

“[Social media] is helping to demystify diplomacy, and opening doors to what we do,” said Michael Grant, deputy permanent representative of Canada to the U.N.

Through harnessing the power of viral videos, Twitter hashtags and strategic outreach, even the smallest of social campaigns can become globally ubiquitous.

Recent notable examples, including ‘black lives matter’ (protesting the deaths of black men at the hands of police), and ‘bring back our girls’ (calling for the release of 270 Nigerian schoolgirls kidnapped by Boko Haram), saw the transformation of essentially local campaigns into slogans recognised worldwide.

Anna Nelson, spokesperson for the International Committee of the Red Cross (ICRC) and editor of its Intercross blog, told IPS social media had radically changed the way her agency and many others executed campaigns.

“When a crisis or disaster happens, people want to do something. It’s hard to give them an outlet to do anything, especially in a war zone, but social media gives people the opportunity to participate in fundraising or awareness,” Nelson said.

“People want to make a difference, but it was sometimes impossible before. For aid agencies, social media is a very powerful tool.”

Nelson spoke on Friday about the ICRC’s efforts in using social media to highlight issues around conflicts in Afghanistan, Syria and Ukraine.

She said social media has been hugely effective in helping ICRC reunite families separated in crises. She also singled out a 2011 TEDx event the ICRC curated in Geneva, which included a talk by an Afghan man with no legs and one arm.

A video of the talk, raising awareness of the Afghanistan conflict, has since been translated into many different languages and viewed 700,000 times. She said social media allowed even smaller organisations to bring global attention to their causes.

“Social media is a megaphone. You won’t reach everybody, but it levels the playing field,” Nelson told IPS.

Andre Banks, executive director of LGBT advocacy group All Out, also spoke on Friday about awareness and activism successes achieved through social media. He outlined a recent campaign that was successful in forcing a prominent hotel chain to discontinue their indirect funding of anti-gay groups, through mass mobilization of All Out’s social media supporters.

“Social media is the critical way we ask people to get engaged, and also get their own networks engaged,” Banks told IPS.

“Without social media, it would have been impossible for us to be the kind of success we have been.”

Banks also said the new technology allowed the messages of All Out and other advocacy groups to be placed in front of a wider, larger group of potential supporters than ever before.

“The most interesting thing is that social media helped us get supporters we wouldn’t have been able to get. Half our network are straight people,” he said.

“They’re not in LGBT communities, but their friends, family or colleagues are. People who don’t identify as LGBT still see our messages. It lets us reach outside that community.”

Nelson and Banks both also acknowledged the pitfalls of ‘clicktivism’ or ‘slacktivism,’ a term denoting the online sharing of social or political issues without any material support of that issue; however, Nelson said she did not consider the trend as a concern to aid agencies or charities.

“If someone wants to use social media and tell their friends about something happening somewhere, I’m all for that. I don’t see that as lazy or incidental,” Nelson said.

“If that’s all you can do, that’s still something. Anything that leads to people giving a thought to something, or getting motivated, is good.”

“International diplomacy no longer takes place exclusively behind closed doors,” said Maher Nasser, acting head of the U.N. Department of Public Information, in opening a panel on how diplomats use social media.

The Twiplomacy report states more than 3,500 embassies and ambassadors are active on Twitter, and that all but one of the G20 governments have an official Twitter presence.

As of November 2014, world leaders had sent a total of 2.2 million Tweets, averaging four posts each day.

While no speaker at the Social Media Day could point to a specific example of social media being used directly for negotiations, official correspondence or decision-making, it was agreed unanimously that social media is today almost essential in spreading information and messages.

Grant said, in his position as deputy permanent representative of Canada, he uses Twitter daily to both find and spread information.

“Is social media absolutely 100 per cent required? No, it isn’t. But I think you can do your job better by engaging with social media,” Grant said. “Is it 100 per cent part of diplomacy? Yes it is.”

There are more than 50 Canadian heads of mission active on Twitter.

Grant said Canada uses social media to “replicate and amplify messages,” such as diplomats’ speeches and public appearances, as well as more practical information such as warning Canadians overseas of conflict or natural disaster.

“We use Facebook and Twitter in emergencies, to target Canadians in affected areas… it’s very much part of our mainstream,” he said.

However, despite the name and the aim of the day, Grant said social media was not yet materially changing diplomacy or international relations.

“It is changing, but not as dramatically as one would think,” he said.

Masood Khan, permanent representative of Pakistan to the U.N., was even blunter in his assessment.

“My participation [in social media] is static. I don’t have any clear directions from my government. It’s a grey area, they haven’t made up their mind,” he said.

Khan said “digital wars” had already started between some members of the Security Council, with confidential information allegedly leaked to journalists through social media.

“You have all these allegations about espionage… In the Security Council, members love to Tweet. Even the most confidential information would appear in the newspapers, New York Times and Washington Post, and usually the source would be a Tweet,” he said.

“[Members] would blame each other, that it was done by the others… In that sense, Twitter wars have started, and we have to find ways to resolve those conflicts.”

With social media becoming an evermore pervasive facet of modern life, and a growing force in diplomacy and non-governmental work, this will not be the last we hear of Twiplomacy in action in international relations.