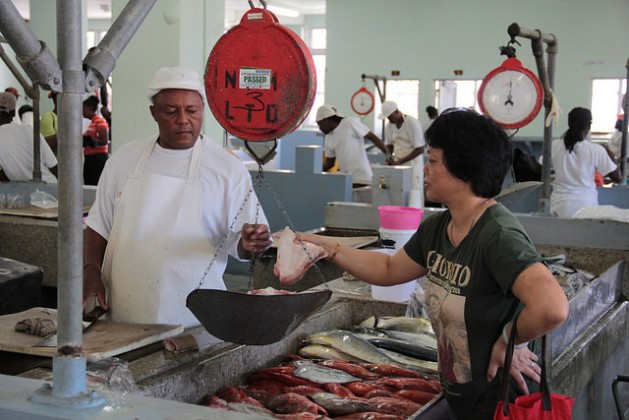 A woman purchases fish at a market in Kingstown, St. Vincent. CARICOM leaders say fisheries is one of the important economic sectors already being impacted by climate change. Credit: Kenton X. Chance/IPS

“The Lima Accord did decide that the Parties would continue to work on the elements in the Annex to develop a negotiating text for the new Climate Change Agreement. We wanted a stronger statement that these were the elements to be used to draft the negotiating text,” Carlos Fuller, international and regional liaison officer at the Caribbean Community Climate Change Centre told IPS.

"We are looking to develop a position that will allow our heads [of state] to speak with one unified position on climate change." -- Minister James Fletcher

“However, we lost all the specifics that would inform parties on what should be submitted. We lost the review process for the INDCs and only those parties who wished to respond to questions for clarification would do so,” Fuller said.

The Lima talks forms part of the homestretch leg of negotiations ahead of the 21st Conference of Parties (COP21) of the 196 Parties to the United Nations Framework Convention on Climate Change (UNFCCC), slated for Paris in December.

The UNFCCC is the parent treaty of the 1997 Kyoto Protocol, which has been ratified by 192 of the UNFCCC Parties. The ultimate objective of both treaties is to stabilise greenhouse gas concentrations in the atmosphere at a level that will prevent dangerous human interference with the climate system.

At the meeting in Paris, parties are expected to sign a legally binding accord intended to keep human-induced global temperature rise within levels that science says will avert catastrophic climate change.

CARICOM negotiators are trying to avoid a repeat of Lima and are identifying the “red line” issues that are “sacrosanct” for their populations as they prepare for the Paris summit.

In preparation for the Paris talks, lead negotiators from CARICOM met here on Apr. 21, first, to prepare for an engagement of CARICOM heads with French President François Hollande in Martinique on May 9.

“President Hollande, I guess, is intending to meet with CARICOM heads to get from them what are the main concerns of Caribbean small island developing states and to see how he can develop some momentum, some consensus leading to Paris,” James Fletcher, St. Lucia’s Minister for the Public Service, Sustainable Development, Energy Science and Technology, tells IPS.

The Castries meeting brought together CARICOM lead negotiators and technical experts on climate change, Fletcher says, adding, “Our meeting was a meeting of technical experts to really refine what are our main positions, what are the issues that are sacrosanct for us, what are the red line issues, that, as far as we are concerned, any new agreement on climate change must address.”

Serge Letchimy, president of the Regional Council of Martinique, tells IPS that the regional summit in Martinique “is dedicated to preparation and mobilisation toward” COP 21 and will bring together states and territories of the Caribbean.

The regional summit aims to list the initiatives of the Caribbean region “which must be integrated in a ‘schedule of solutions’ adapted to the specificities of these territories,” explains Maïté Cabrera, a media relations official involved in the organisation of the Martinique meeting.

“It also aims to contribute to the writing of an ambitious and binding global agreement which must be adopted during COP21,” Cabrera tells IPS. 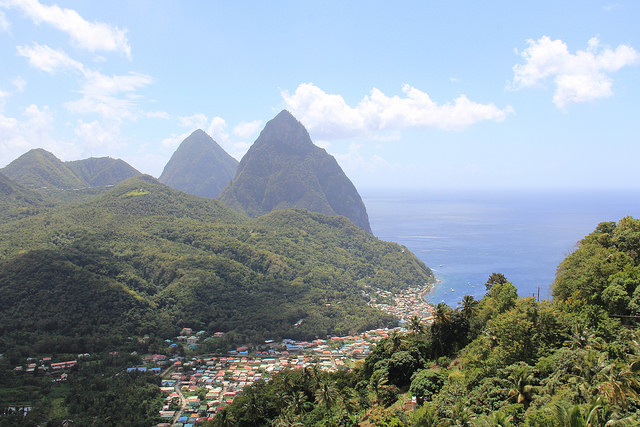 The Castries meeting of CARICOM climate change negotiators was also a stocktaking gathering at which officials examined the status of their proposals ahead of COP 21.

A third element of the Castries gathering had to do with preparing for a meeting of U.N. Secretary-General Ban Ki-Moon and CARICOM leaders at the CARICOM Head of Government meeting in Barbados in July.

“So, again, we are looking to develop a position that will allow our heads to speak with one position, one unified position on climate change in that meeting with the Secretary General, which, again, deals with climate change and climate finance.”

“If there is one thing I can say from the time I have been involved in this process is that Caribbean heads, Caribbean countries have all been united on our issues, there is no disagreement amount us,” says Fletcher, who has attended several COPs, including in Warsaw in 2013 and Lima in 2014.

However, he also identified areas in which the region can do more to shore up its negotiating ahead of Paris.

“I think what needs to happen a little more is coordination and this is what today’s meeting is about, ensuring that that coordination is there,” he tells IPS, adding that coordination worked well at the Third International Conference on Small Island Developing States (SIDS) in Samoa last year.

Fletcher tells IPS that at the Samoa conference “there was a very strong Caribbean presence and a very good coordinated presence to ensure that we were able to speak with the same voice and we attended all the meeting in numbers and that is what we are aiming for in Paris this year”.

He pointed out that the outcome of the Paris summit will have a direct impact on the residents of the Caribbean.

“We have been saying for a long time now that climate change represents an existential threat for small island developing states like the Caribbean, that we have to limit global warming to no more than 1.5 degrees Celsius above pre-industrial levels, and that anything above 1.5 degrees Celsius will cause catastrophic sea level rise, will cause warming of our oceans, will cause acidification of our oceans, which will impact our fisheries, impact our tourism sector, will cause reduction in water availability and that has impacts for agriculture, for ordinary lives, for availability and accessibility of potable water,” he tells IPS.

“Anything above 1.5 degrees will result in an increase in the severity and frequency of extreme weather events like storms and hurricanes. So, we have a very real stake in what comes out of Paris, and we cannot allow the Paris agreement to be one that we know will cause us to have a climate that is warming at a rate that is catastrophic for us, small island countries like ours, and low-lying countries like Guyana,” Fletcher tells IPS.