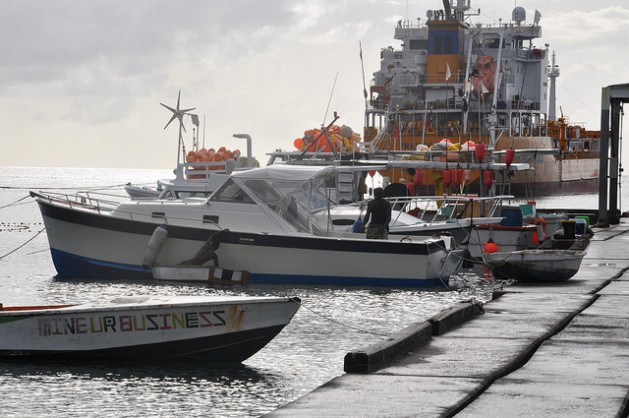 Grenadian fishermen prepare to head out to sea. They say they have been catching less fish and their livelihoods are threatened by climate change. Credit: Desmond Brown/IPS

PALMISTE, Grenada, Apr 27 2015 (IPS) - Henry Prince has lived in this fishing village for more than six decades. Prince, 67, who depends on the sea for his livelihood, said he has been catching fewer and fewer fish, and the decrease is taking a financial toll on him and other fisher folk throughout the island nation of Grenada.

I heard about the climate change but never paid too much attention towards it,” Prince told IPS, adding that “we don’t catch jacks as before.”

Jacks, a small fish widely used by the fishermen as bait, are also fried and eaten by poor families for whom they are an inexpensive source of protein.

Over the last few years, fisher folk have not been catching the jacks, which are usually found in abundance around the month of November. Due to the scarcity of jacks, fishermen have been forced to import sardines from the United States to use as bait.

Grenada’s Agriculture, Land, Fisheries and the Environment Minister Roland Bhola believes the dwindling numbers of fish in the country’s waters are a direct result of climate change.

“Our fishermen are reporting less and less catches in areas where there was once a thriving trade,” Bhola said.

“We have been able to associate that with the issues of climate change … the destruction of our coral reefs and other ecosystems like mangroves,” he said.

“The catch is one day good, one day bad as far as I am looking at it,” Ralph Crewney, another fisherman, told IPS.

“For the last few months we hardly catch anything. Last June, it was just at the last moment that we made big catches.” 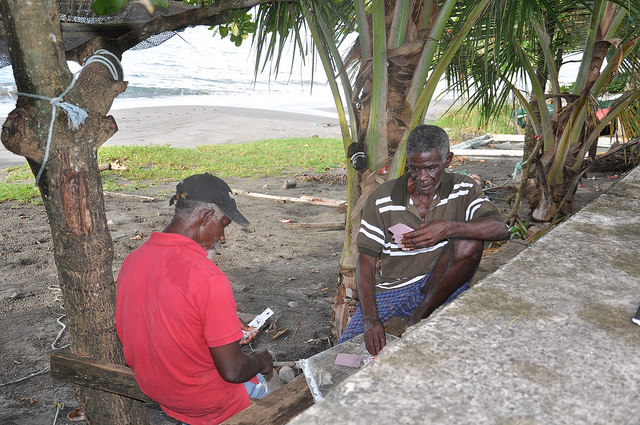 Crewney, 68, has been living on the seashore for close to 20 years. He noted that in recent times the sea is getting a lot closer to his small shack. But he has no immediate plans to move.

“I feel comfortable here because I like to be away from the noise,” he explained.

Other families in the area are now thinking about relocating to communities in hilly areas but are reluctant to move too far from their source of livelihood.

Fishing families in the Caribbean see beachfront living as a virtual birthright, with an alarming 70 percent of Caribbean populations living in coastal settlements.

Experts say that while storms and beach erosion have long shaped the geography of coastal environments, rising sea levels and surge from more intense storms are expected to dramatically transform shorelines in coming decades, bringing enormous economic and social costs.

Scientists and computer models estimate that global sea levels could rise by at least one metre (nearly 3.3 feet) by 2100, as warmer water expands and ice sheets melt in Greenland and Antarctica.

Global sea levels have risen an average of three centimetres (1.18 inches) a decade since 1993, according to many climate scientists, although the effect can be amplified in different areas by topography and other factors.

On Apr. 16, delegates attending a one-day National Stakeholder’s Consultation here urged the authorities to re-establish the National Climate Change Council as the island moves to strengthen measures to deal with the impact of climate change.

They said while Grenada had made progress on dealing with climate change and the environment, it still has some way to go to become climate resilient and to develop the capacity to implement climate resilience actions.

The one-day consultation was jointly organised by the World Bank and the Grenada government.

A government statement issued after the consultation said that the re-establishment of the Council will help “drive the climate change agenda of integrating climate change at the national planning level, the mainstreaming of climate change adaptation” as well as monitoring and reporting. 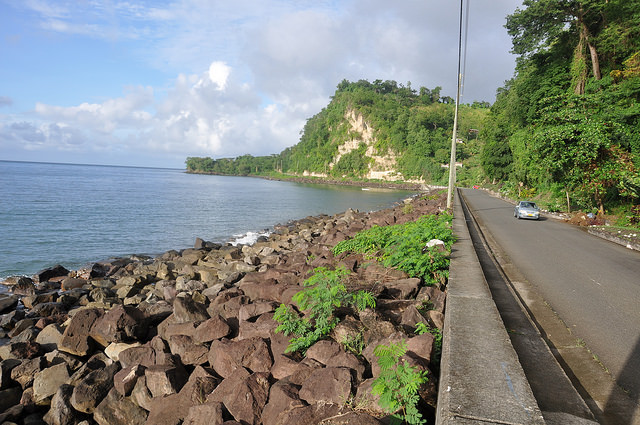 Grenada along with St. Vincent, St. Lucia, Dominica, Jamaica and Haiti stand to directly benefit from this grant.

A 2007 report by the Intergovernmental Panel on Climate Change said the devastation wreaked on Grenada by Hurricane Ivan in 2004 “is a powerful illustration of the reality of small-island vulnerability.”

The hurricane killed 28 people, caused damage twice the nation’s gross domestic product, damaged 90 percent of the housing stock and hotel rooms and shrank an economy that had been growing nearly six percent a year.

Grenada and its tourism-dependent Caribbean neighbours are thought to be among the globe’s most vulnerable countries.

Scientists say the island has a high risk of being adversely impacted by climate change in several areas. These include coastal flooding due to natural disasters and storm surges. They also point to marine ecosystems being affected by increased ocean temperature, and increased freshwater run-off resulting in coral reef destruction and food chain interruption which affect fishing and tourism industries.

Over the last 25 years, the fragile Grenadian islands of Carriacou and Petite Martinique have also been bombarded by storms, hurricanes, higher tides and sea surges.

This resulted in severe loss of mangrove vegetation along the coastline, beach erosion, damage to soil and serious threat to the local tourism industries which depend heavily on the pristine condition of the beaches and health of the marine life.

Meanwhile, as countries prepare to adopt a new international climate change agreement at the Paris climate conference in December, Bhola said Grenada is looking forward to the implementation with great anticipation.

“My country, Grenada, a small developing country, has very high vulnerability to climate change. A successful agreement for us therefore has to reduce the risks that we face from climate change and has to assist us in coping with the impacts on our country, our people and our livelihoods,” Bhola said.