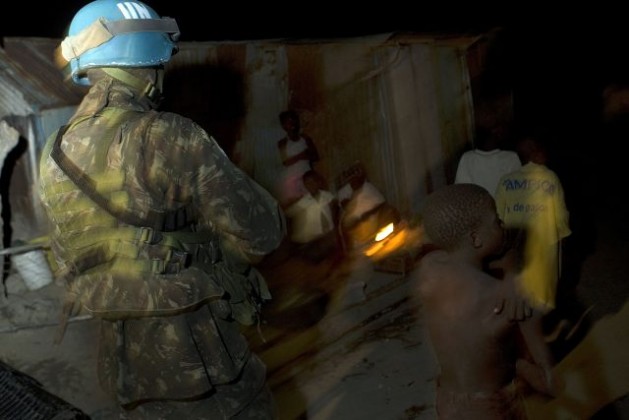 Different jurisdictions and immunities apply to civilian and military personnel, made more obscure by a lack of transparency and detail in the U.N.’s reporting of abuse cases. Photo: UN Photo/Pasqual Gorriz

UNITED NATIONS, May 13 2015 (IPS) - “We can really argue as much as we want but if we put ourselves in the skin of victims, we just have to do something to stop this.”

This was Graça Machel’s appeal at the launch of Code Blue, the campaign to end impunity for sexual violence by United Nations (U.N.) peacekeeping personnel Wednesday.

“Each country will act according to what it thinks is appropriate and more often than not rather than a full-fledged investigation you simply see a plane arriving and a bunch of people being put on a plane and disappearing." -- Lt. General Roméo Dallaire

Machel, a renowned human rights advocate, spoke of her own dismay when researching the landmark U.N. study ‘The Impact of Armed Conflict on Children’.

“We came across, eye to eye, women and girls who had been abused by U.N. peacekeeping personnel – it was shocking to us,” Machel said.

Peacekeeping is about more than military peace but also about bringing peace in people themselves, Machel said.

The panel implored the United Nations and world leaders to act, and called for a truly independent Commission of Inquiry, with unobstructed access to U.N. records and correspondence, and full subpoena power.

Mahel called for the response to cut through the complex technicalities that raised many questions from the media present at the launch.

The problem is truly complex, with different jurisdictions and immunities applying to civilian and military personnel, made more obscure by a lack of transparency and detail in the U.N.’s reporting of cases.

One issue discussed at the forum was Code Blue’s decision to first focus on civilian personnel. The founders of Code Blue argued that this is an important first step to addressing the overall problem.

IPS spoke with Dr Roisin Burke, author of the book ‘Sexual Exploitation and Abuse by U.N. Military Contingents,’ who said that while she agreed that the “jurisdictional vacuum” surrounding civilian personnel needed to be addressed, she also hoped that Code Blue would equally tackle sexual abuse and sexual exploitation by both military and civilian personnel.

“The vast majority of U.N. operations, 70-80 percent of the people who are deployed are military, so you’ve got hundreds of thousands of military personnel deployed across the world,” Burke said.

The panel also discussed the problems among military personnel, which Code Blue plans to address after first tackling the problem of bureaucratic delays around immunities impairing investigations into civilian personnel.

Lt. General Dallaire also discussed the problems associated with investigating allegations against military personnel who continue to fall under the jurisdiction of their home country.

“Each country will act according to what it thinks is appropriate and more often than not rather than a full-fledged investigation you simply see a plane arriving and a bunch of people being put on a plane and disappearing,” said Dallaire.

“There is far too much centralisation and taking away the ability of those in the field to be able to do the investigation in a timely fashion,” he said.

The panel disagreed with the idea that troop contributing countries will be less likely to send troops if their troops risk prosecution for sexual abuse.

“I come from Bangladesh, the largest troop contributing country. Bangladesh will welcome very much setting the standards high,” Chowdhury said.

Dallaire also agreed that this argument did not hold up and that it was holding the U.N. to ransom.

The first problem Code Blue plans to address though is immunity for civilian personnel. Donovan said that it was often not possible to substantiate allegations against civilian peacekeepers because bureaucracy gets in the way.

“The first step that kicks off the bureaucracy is immunity,” she said.

Immunity is not meant to cover sexual exploitation and abuse because personnel are only covered by immunity during their normal functions as a U.N. staff member. However, Donovan said that there are significant delays because each individual case has to be reviewed by the secretary-general before immunity can be waived. During this time evidence is eroded and witnesses disappear, making a successful investigation almost impossible.

Chowdhury told IPS he believed the U.N. should no longer hide behind legal difficulties and should take the moral high ground in these situations. He added that addressing sexual exploitation and abuse was important if the U.N. was serious about involving more women in peacekeeping operations.

An internal expert report leaked by AIDS-Free World earlier this year said that there is considerable under-reporting of these cases.

Sowa spoke passionately, saying it was heartbreaking this issue had to be discussed, “when the U.N. becomes the protector of predators instead of the prosecutor of predators, that destroys me because I believe in the U.N.”