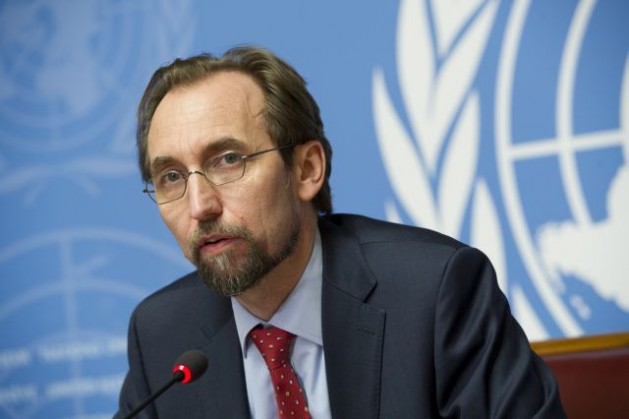 Zeid Ra’ad Al-Hussein, UN High Commissioner for Human Rights, addresses a press conference on the investigation into alleged sexual abuse of children in the Central African Republic by foreign military troops during the French military intervention in that country on May 8, 2015. Credit: UN Photo/Violaine Martin

UNITED NATIONS, May 12 2015 (IPS) - A rising tide of sexual abuse in U.N. peacekeeping operations has triggered the launch of a high-level campaign to end the continued attacks on women and children and an urgent call for the creation of an independent commission of inquiry.

The latest “horrible” sexual attacks have been attributed to French peacekeeping forces in the Central African Republic (CAR) although U.N. spokesman Stephane Dujarric said they were “not under the command and control of the United Nations.”

"The truth is startling and simple: No new mechanisms, no new methods of operation, no new policies can ever work in practice to prevent or punish sex abusers on staff who commit sexual offenses at present, because the U.N. bureaucracy responsible for implementing changes is completely dysfunctional." -- Paula Donovan

“We do hope that anyone who engaged in the atrocious activities involving children in the Central African Republic face justice and are prosecuted,” he told reporters last week.

Paula Donovan, co-director at AIDS-Free World, who helped break the story of a long-suppressed report on sexual abuse in CAR, told IPS: “From confusion and ineptitude on the ground, to cover-ups at the highest levels of the U.N. in New York, Member States must subject U.N. peacekeeping to a rigorous, entirely independent commission of inquiry with complete access to documents and staff.”

Until that happens, any new polices or procedures will fail, just as the current policies and procedures do, in their implementation, said Donovan, a former executive officer at the U.N. Children’s agency UNICEF and regional advisor, East and Southern Africa.

But the existence of diplomatic immunity is said to allow perpetrators to go unpunished and avoid legal constraints.

But against the backdrop of the current campaign, called Code Blue, the proposal may be revived, even though it could be shot down by developing countries who provide most of the soldiers in the 16 peacekeeping operations currently under way, with an estimated total of 106,595 military personnel and 17,000 civilian staff.

Asked whether an international convention will deal more effectively with sexual exploitation and abuse by U.N. staff, police and experts on mission (who are currently covered by the 1946 Convention on Privileges and Immunities), a sceptical Donovan told IPS “jurisdictional issues are incredibly complex in peacekeeping operations.”

“But the truth is startling and simple: No new mechanisms, no new methods of operation, no new policies can ever work in practice to prevent or punish sex abusers on staff who commit sexual offenses at present, because the U.N. bureaucracy responsible for implementing changes is completely dysfunctional,” she declared.

“If not now, when?” she asked. “It’s time to close the accountability gap. We have addressed this point in our recent international security sector workshop.”

She said: “I am hopeful about this convention and we will advocate for its adoption and ratification. We, in civil society, are always hopeful—as that is one of our sources of strength amidst growing conservatism among governments and as a result, repression of civil society.

“At the same time, we are also realistic as we have our ears close to the ground. We know what is happening. The information we receive is not filtered—unlike what U.N. headquarters and government missions receive.”

So, realistically speaking, she had doubts that troop contributing countries (TCCs) will actually support such a convention—except maybe the European countries and Canada.

However, these are not the biggest troop contributing countries. The biggest TCCs are in the developing world, she pointed out.

“We should do active lobbying with the big TCCs and show them that the convention will be useful to them—it can serve as a guide for Member States to monitor their troops; and in investigating and prosecuting troops who have committed crimes,” she added.

A 2008 report of the ‘Ad Hoc Committee on Criminal Accountability of U.N. Officials and Experts on Mission’ said “some delegations reiterated the view that it was premature to discuss the possibility of negotiating an international convention on the topic, as had been proposed by the Group of Legal Experts, and as had been subsequently supported by the Secretariat in its note.”

It was argued, the report said, that it was necessary to understand the actual impediments to prosecution, before embarking on the negotiation of a convention.

Some delegations expressed support, in principle, for a convention requiring member states to exercise jurisdiction over their nationals participating in U.N. operations.

The report further added: “It was noted that while bilateral agreements existed in the area, they provided incomplete coverage and did not usually address judicial cooperation between States and the United Nations.”

Cabrera-Balleza told IPS the TCCs should also put themselves in the shoes of the recipient countries. Don’t they want to see accountability if crimes are committed against their own people?

“I am also hoping that this convention would include mandatory training on U.N. Security Resolution (UNSCR) 1325, 1820 and supporting resolutions on women, peace and security (WPS). The TCCs should be mandated to train their troops prior to deployment and debrief using the WPS resolutions as guide after deployment.”

She said the United Nations also has a Conduct and Discipline Unit under the Department of Field Support that maintains global oversight of the state of discipline in peacekeeping operations and special political missions.

“However, I once had a discussion with a Conduct and Discipline Officer in a peacekeeping mission and we asked him if they are integrating UNSCR 1325 in their training and he had no clue what I was taking about,” she said.

The U.N. is committed to a zero- tolerance policy against sexual exploitation and abuse but its Member States are not. The convention will bring some coherence, she declared.