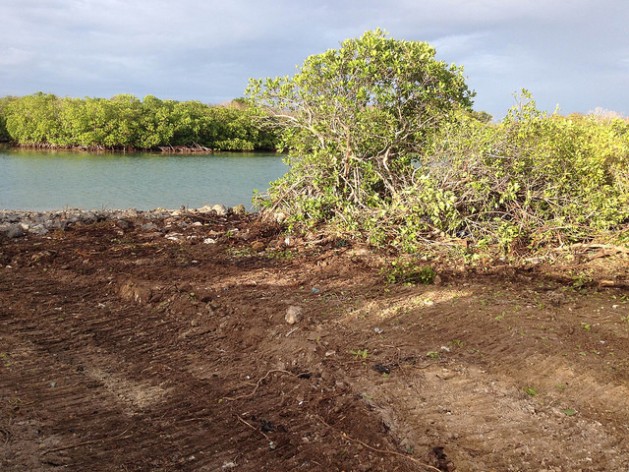 Mangroves being cleared on Antigua's Guiana Island to make way for the construction of a road. Credit: Desmond Brown/IPS

GUIANA ISLAND, Antigua, May 18 2015 (IPS) - In June 2014, Gaston Browne led his Antigua and Barbuda Labour Party to a resounding victory at the polls with a pledge to transform the country into an economic powerhouse in the Caribbean.

"We want to see the prosperity of Antigua and Barbuda but what... are we willing to give up to have a few more jobs?" -- Tahambay Smith

The largest is the Yida Investment Group, Guiana Island Project which will see the development of the largest free trade zone in the country, an off-shore financial centre, a five-star luxury resort, internationally branded villa communities, a casino and gaming complex, a multi-purpose conference centre, a 27-hole golf course, a marina and landing facilities, commercial, retail, sports and other auxillary facilities.

But Yida’s clearing of mangroves on Guiana Island to start the proposed development has raised the ire of local environmentalists who have launched an online petition calling on Prime Minister Browne not to allow the Chinese developers to break laws and to conserve the Marine Protected Areas.

“Climate change is going to change a lot of things that we know and understand about our environment and unless we are mitigating these outcomes it is just wasting time and effort to have something built and then 20 years down the line it would not be viable,” President of the Environment Awareness Group (EAG), Tahambay Smith told IPS.

“Climate change is upon us. What if 10 years from now the development is rendered non-viable because climate change has led to rising sea levels or something?” he said.

“First of all you are talking about a place that is naturally protected because anyone that’s familiar with that area knows that you have a natural reef buffer zone that basically protects us from the raging Atlantic,” he added.

Guiana Island, located off the northeast coast of Antigua between the Parham Peninsula and Crump Island, is the fourth largest island of Antigua and Barbuda. It is a refuge for the Fallow Deer, Antigua’s national animal.

Smith said building a marina in the area would also result in the destruction of reefs and removal of sea grass beds, adding that a few jobs and some investment dollars do no equate to the importance of preserving the environment for future generations.

“Yes we’re all clamouring for jobs and we want to see the prosperity of Antigua and Barbuda but to what detriment and to what extent are we willing to give up to have a few more jobs? The value of mangroves to us as human beings is well documented by scientists. They provide nesting grounds and a breeding ground for fishes, lobsters, crustaceans and many others that aren’t really tied to the Antiguan shores,” Smith said.

“You might have nursing grounds here that affect St. Kitts, St, Maarten, Guadeloupe – the closer islands. It may extend beyond those islands but if you do something here in Antigua and you destroy these things, then that could affect our neighbours. It is not a matter of us just looking about our affairs or just looking for our own interest. It’s a network; these things are interconnected.”

“Our God-given marine ecosystems designed to protect our fragile economies must be protected,” she told IPS.

“How will we adapt to the impacts of climate change if these systems are threatened? The protection of our marine ecosystems is our natural adaptation strategy. Once destroyed, how will be build resilience?”

Eli Fuller is the President of the Antigua Conservation Society (ACS), the group spearheading the petition which outlines that Guiana Island falls within an area protected by the nation’s Fisheries Act and also falls within the North East Marine Management Area (NEMMA), which was designated a Marine Protected Area in 2005.

“There isn’t much on a small island that isn’t related to climate change these days and even more when you are speaking about a massive development all taking place at sea level within an extremely important area designated by law as a Marine Protected Area and zoned as an area for conservation,” Fuller told IPS. 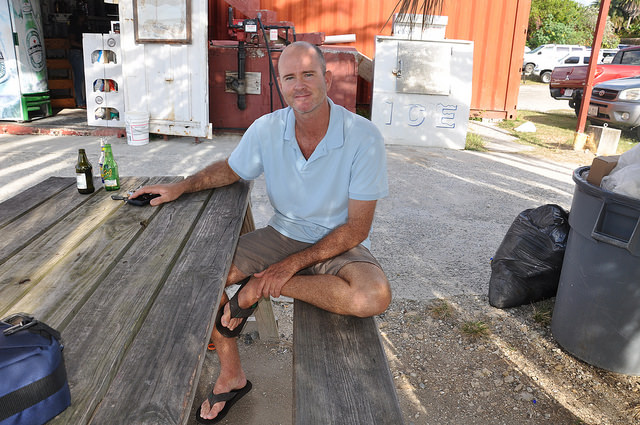 “Filtering sediment helps save many ecosystems like corals and grassy beds which get damaged when they are covered in silt or sediment. Speaking of marine eco systems, there are so many things that are negatively affecting them because of climate change. Coral bleaching often happens due to effects of climate change and with weakened coral reefs and other marine ecosystems, careful protection is essential,” he added.

But Prime Minister Browne said those who have raised concerns about the mangroves have taken a fundamentalist position.

“I want to make it abundantly clear that individuals, especially small minority groups with their fundamentalist ideals, those cannot take precedence to the overall good of the country,” Browne said.

He added that, “some fauna may have to be destroyed” as government proceeds with various developments.

“My government does not need to be schooled in the protection of the environment,” Browne added.

Fuller maintains that Prime Minister Browne was the man to petition in large numbers so that he could see that it wasn’t a “fundamentalist” minority that was very concerned with this particular development.

“He has to know that people will hold him accountable for breaches in the laws which are there to protect Marine Protected Areas,” he said.

“The ACS sees a situation where our prime minister acknowledges this groundswell of support for sustainable development and more specifically for making sure that developers adhere to environmental protection laws.

“We think he will meet with us and other NGO groups to hear our concerns and to work together with us and hopefully the developers to ensure that the development is guided in accordance with the law and with modern best practices,” Fuller said.