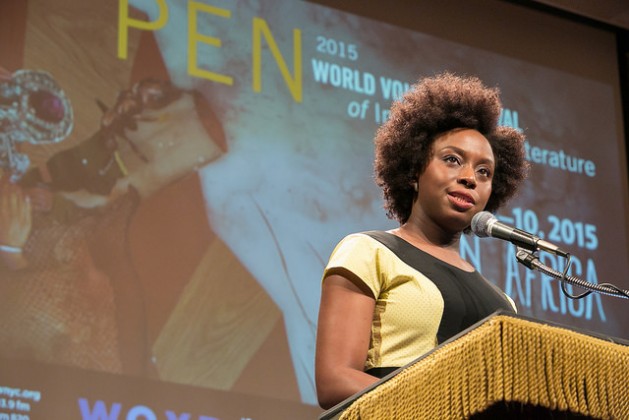 NEW YORK, May 12 2015 (IPS) - Nigerian author Chimamanda Ngozi Adichie, co-curator of a spectacular World Voices week with over 100 African writers, closed the May 4-10 event with an admonition.

Referencing “codes of silence” that govern American life, Adichi urged her audience at the Great Hall of the Cooper Union University in New York City “to reject silence.”

“There is a general tendency in the United States to define problems of censorship as essentially foreign problems,” she was quoted to say by reporter Nicole Lee, writing for the Guardian UK publication.

Americans like to be comfortable and this comfort has brought a “dangerous silencing” into American public conversation, Adichie observed. “The fear of causing offense, the fear of ruffling the careful layers of comfort, becomes a fetish,” she said. As such, the goal of many public conversations in the United States “is not truth … [it] is comfort”.

According to Adichie, social media is a contemporary “tool of silencing”. The Twitter campaign to Bring Back Our Girls focused on the abduction of 200 girls in Nigeria, for example, and it appeared as if Boko Haram only targeted girls.

While that image recalled the actions of the Taliban in denying rights to women and girls, in fact, the terrorist group kidnapped almost as many young boys, making them into child soldiers. Boko Haram, she reminded the audience, is opposed to Western-style education for both girls and boys.

“It is censorship to force a story to fit into something that already pre-exists,” she said.

It was as a citizen and writer that Adichie spoke out against the recent criminalisation of homosexuality in her home country, a law that not only put the safety of many innocent civilians at risk, but also many of her friends, as the Guardian writer pointed out.

Chimamanda Adichie has been called “the most prominent” of a “procession of critically acclaimed young anglophone authors attracting a new generation of readers to African literature”. The author of Purple Hibiscus,” a coming-of-age novel set in post-colonial Nigeria, and two more critically-acclaimed novels, “Half of a Yellow Sun” (2006) and “Americanah” (2013), as well as a collection of short stories, she won a MacArthur “genius” grant in 2008.

The country’s elections in March have made Adichie more optimistic about Nigeria’s prospects. “It was proof that democracy…is making progress,” she says.

The event was hosted by the Freedom to Write group PEN American Center.