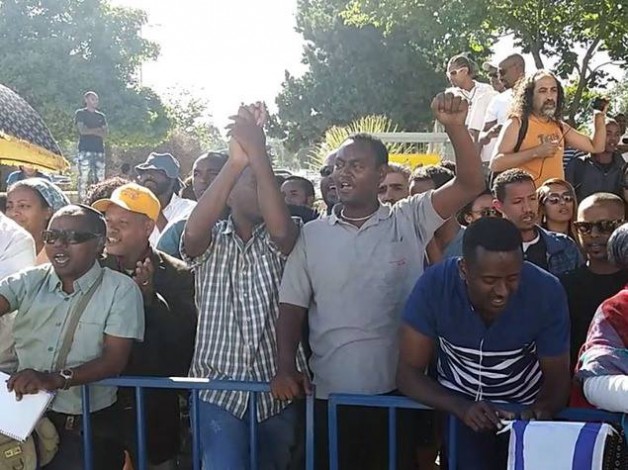 NEW YORK, May 4 2015 (IPS) - A video that caught an Israeli police officer and a volunteer shoving and punching a black soldier in uniform outraged members of the Ethiopian Jewish community and set off a clash Sunday between Ethiopian Jews and police in central Tel Aviv.

Thousands took part in the Sunday protest over the incident, including many non-Ethiopian Israelis. Police met the crowd, which froze traffic along a major highway, with water cannons and tear gas.

Some 13 people were injured and two policemen were reportedly suspended on suspicion of using excessive force.

From the video, caught by a security camera, the soldier, Damas Pakada, a member of the Israeli Defense Force, appears to be pushing a bicycle. Two officers approach him and after a brief interaction, attack him, push him to the ground, punch him, and appear to put him in a headlock. The officers look to weigh about twice Pakada’s slim size.

Pakada was initially accused of attacking the officer and arrested, only to be released once the surveillance video of the attack was uploaded to social media.

Fentahun Assefa- Dawit, executive director of Tebeka – Advocacy for Equality and Justice for Ethiopian Israelis, says that this was the straw that broke the camel’s back, but not an isolated incident.

The only thing unique about this incident, he said, is that it was caught on film. Young Ethiopian Israelis being attacked by police and then falsely accused of crimes is an all-too common scenario, he said.

“You can imagine, if there were no footage, what would have happened to this soldier?” asks Assefa-Dawit rhetorically. Pakada would have been put in jail with a record for assaulting a police officer following him around for the rest of his life.

The clashes reflected widespread frustration in the Ethiopian community which, three decades after it first arrived in Israel, has become an underclass plagued by poverty, crime and unemployment.

“Anyone who attended the protest yesterday experienced at one point in their life humiliation based on nothing but skin color,” said Mehereta Baruch-Ron, a Tel Aviv deputy mayor of Ethiopian descent. ‘We have had enough. It is time to do something.’

Shlomo Molla, a former lawmaker of Ethiopian origin, said his generation failed to make a change and that hope lies with the younger generation who were born in Israel and are less intimidated by the establishment.

“We should stop enlisting in the army, not join the police, and stop paying taxes, because if the state doesn’t take its citizens into account, the citizens are also permitted not to take the state into account.’

Children of the older generation of Ethiopian Jews speak fluent Hebrew, study in universities and serve in the army alongside native Israelis. But despite such gains, the younger generation is still struggling compared to other Israelis.

As the video of the beating went viral, Israel’s Prime Minister Benjamin Netanyahu set up a meeting with the young soldier. “I was shocked by the pictures,” he told Pakada.” We cannot accept it, we will change things.”

“Maybe good things will come out of this difficult situation.”