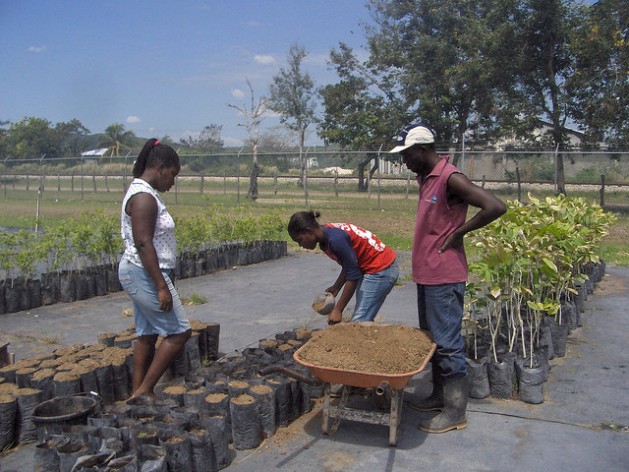 KINGSTON, Jun 4 2015 (IPS) - For Jamaica, planting more trees as a way to build resilience is one of the highest priorities of the government’s climate change action plan. So when Cockpit Country residents woke up to bulldozers in the protected area, they rallied to get answers from the authorities.

On May 18, Noranda Bauxite Limited acted on 2004 mining leases and moved its heavy equipment into the outer areas of the Cockpit Country, ignoring unresolved boundary issues. Their actions reignited a simmering row between stakeholders and government over demarcation and protection of the biologically diverse area.

Bauxite mining is said to be the single largest cause of deforestation on the island.

Whilst the company denies that it has begun mining, its officials admit to prospecting. Noranda’s actions however, raised suspicions that government had reneged on a promise made in 2006 when several prospecting leases issued to Alumina Partners were revoked. Back then, authorities had promised residents that the Cockpit Country would be off-limits to bauxite mining.

Junior Minister for Mining and Energy Julian Robinson has reiterated his government’s commitment to preserving the area, but many continue to be wary.

Michael Schwartz, director of the Windsor Research Station, is fearful that government will seek to “placate” the people with “a token boundary” which defines the Cockpit Country to an area “where there is no bauxite to be mined”.

“My concern is that GoJ [the government] seems to be completely ignoring the Public Consultation Report, which they commissioned in 2013, and is going to come up with its own boundary,” he said in an email response to IPS.

Schwartz’s concern seems valid. After all bauxite was, until 2008 the island’s second largest earner of foreign exchange. That year bauxite earned 1.37 billion dollars and accounted for 55 per cent of Jamaica’s total merchandise exports and traditionally contributed around five to six per cent of Gross Domestic Product (GDP).

Just prior to the economic fallout and closure of mining operations in 2009, the sector was the third largest foreign exchange earner.

Bauxite mining is also said to be the single largest cause of deforestation on the island. Not only are large areas of forests destroyed to extract the ore, the cutting of haul and access roads opens the prime forests to further threats from loggers, yam stick traders and coal burners.

Forest clearing is identified as one of the biggest threats to the island’s biodiversity and the remaining forests. The Fourth Assessment Report of the Intergovernmental Panel on Climate Change (2007) also identifies forest clearing as one of the top contributors to climate variation. 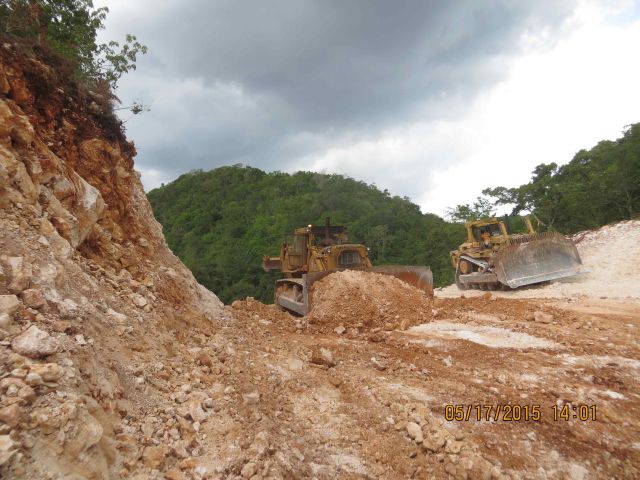 Minister of Environment and Climate Change Robert Pickersgill confirms that changes to the forest cover have  “significant implications” for Jamaica, given that is “highly dependent” on its environmental resources.

At a press conference to announce the findings of the most recent forest assessment surveys on Mar. 10, the minister said:  “The open dry forests that now stand as bare lands have increased the country’s vulnerability to the impacts of climate change and increased our risk of desertification. The loss of our broadleaf forests has reduced the forests’ capacity to provide us with ecosystem services such as water and clean air.”

“Cockpit Country is in relatively good shape today because of its topography, it has conserved itself, so to speak,” Schwartz said, pointing out that whilst farmers have been encroaching on the area for centuries, the difficult terrain had made access difficult thereby limiting the impact of their activities.

The outer boundary proposed during the public consultations that the University of the West Indies conducted will more than double the reserves and is the preferred option. It seems that any other would not go down well with the stakeholders and according to Schwartz: “This would show a willful disregard of the public stakeholders.”

Aside from a rich biological diversity that supports the largest number of globally threatened species in the Caribbean region, Jamaica’s State of the Environment Report 2010 described the Cockpit Country as “the largest remaining primary forest” on the island. The area also supplies fresh water for about 40 per cent of islanders and recharges the aquifers in three major agricultural areas.

In what the Forestry Department describes as its most comprehensive analysis of forest cover change to date, a 2013 survey shows an overall increase in forests and a decline in the amount of high quality forests due to the destruction of wetlands and previously undisturbed areas. More than 4,000 hectares (about 10,000 acres) of mined-out lands have also been restored.

The loss of the swamp forests, Pickersgill says, “poses serious risks to our tourism industry, as well as the success of our disaster management strategies and destroys the habitat for many of our essential wetland species.”

In addition to improved assessments, the Forestry Department is now updating the National Forest Management and Conservation Plan that aims to build on and outline additional strategies to arrest the loss of quality forests, promote sustainable use and regulate saw mills.

The Department continues to work with Local Forest Management Committees in the Cockpit Country and other areas across the island to replant and reduce the impact of the local communities on their forests. Schwartz is confident that ongoing sensitisation and community actions will help to preserve the areas if bauxite mining is excluded.

However, with an estimated one billion tonnes of bauxite remaining, a sluggish economy and most of the country’s earnings going to debt repayment, stakeholders are demanding a resolution of the boundaries sooner rather than later. Many believe that potential earnings from bauxite could tip the balance between preservation and mining of the prized ecological area.

“If mining were allowed, how would you explain how it’s alright for the big man to destroy large areas of forest, but it’s not okay for little man to cut a tree to improve his life?” the researcher asks.