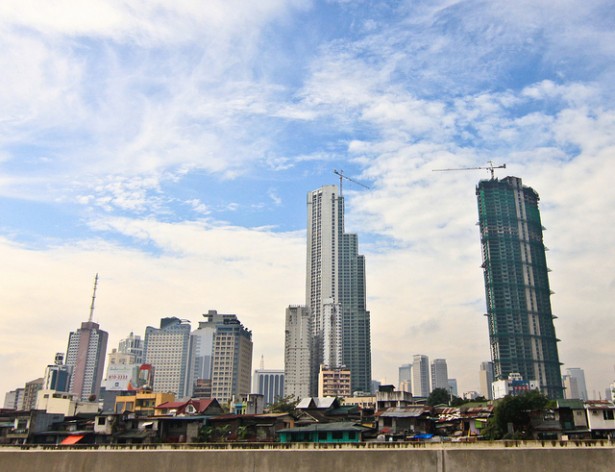 The sharp contrast between the poorer communities’ shanties and the skyline of the Makati City financial district underscores the huge income gap between the haves and have-nots. The Philippines’ income disparity is one of the biggest in South-east Asia. Credit: IPS

UNITED NATIONS, Jun 17 2015 (IPS) - With cities increasingly in the spotlight on the international stage, urban planning and development has become a critical issue in the Sustainable Development Goals (SDGs).

While slums continue to grow in most developing countries, reinforcing other forms of inequality, urban planning requires a shift from viewing urbanisation mainly as a problem to seeing it as a powerful tool for development, according to the 2015 UN-Habitat Global Activities Report.

“The U.N. is fundamentally challenged with its construct of one country, one vote, when most of the implementation of sustainable development will fall to the world's 200 or so largest cities." -- Daniel Hoornweg

Deputy Secretary-General Jan Eliasson says cities have the potential to shape the future of humankind and to win the battle for sustainable development.

“Cities are at the forefront of the global battle against climate change,” he said last week at the Mayor’s Forum of the World Cities Summit in New York.

“The way in which cities are planned, run and managed is crucial. The leadership role of mayors and city governments is therefore of fundamental importance,” he added.

In the last two decades, cities and urban centres have become the dominant habitats for humankind and the engine-rooms of human development as a whole. For the first time in history in 2008, the urban population outnumbered the rural population, marking the beginning of a new “urban millennium”.

Today, more than half of humanity lives in cities. By 2050, around 70 percent of the world’s population will live in urban areas, according to the report.

As Eliasson highlighted, close to one billion of the world’s urban dwellers still live in dire, even life-threatening, slum conditions – and this figure is projected to rise to 1.6 billion by 2030. Some 2.5 billion people in the world lack access to improved sanitation, not least in urban areas.

Daniel Hoornweg, a former World Bank specialist on cities and climate change, says that the lion’s share of implementation will fall to cities regardless of what countries agree in terms of the SDGs.

As stated in the 2014 Revision of the World Urbanization Prospects, urbanisation is integrally connected to the three pillars of sustainable development: economic development, social development and environmental protection.

However, international governments and organisations have not respected this triumvirate, going against the 11th SDG, which aims to make cities and human settlements inclusive, safe, resilient and sustainable.

“Urban planning is still too focused on economic efficiency and growth, leaving aside the goal of upgrading sustainable lifestyles,” Leida Rijnhout, director of Global Policies and Sustainability of the European Environmental Bureau (EEB), told IPS.

“Facilitating a well-functioning and affordable public transport system can be more important than building highways for an increasing number of private cars. Also, preserving local shops (SMEs) and not ‘killing them’ by building big shopping malls is another example of urban sustainability that provides social cohesion,” she added.

The equation is clear: if well managed, cities offer a unique opportunity for economic development and growth, but at the same time, they can expand the access to basic services, including health care and education, for millions of people.

However, this goal can only be achieved if U.N. member states and U.N. agencies come together to promote sustainable urbanisation and if there’s a connection between the power dynamics of local governments and national governments.

“The U.N. is fundamentally challenged with its construct of one country, one vote, when most of the implementation of sustainable development will fall to the world’s 200 or so largest cities,” Hoornweg told IPS.

According to Hoornweg, the U.N. needs to be reformed in order to get a fair representation of large cities on the international stage – “Countries like Fiji and Vanuatu cannot have more influence than Shanghai and Sao Paulo.”

He says an alternative approach could be establishing a “pragmatism council” of the world’s largest cities –say those that are expected to have five million or more residents by 2050 (around 120 cities).

“Having this council negotiate things like SDGs would not yield binding accords but they would yield a very powerful ‘shadow accord’ that no country could easily ignore,” he told IPS.