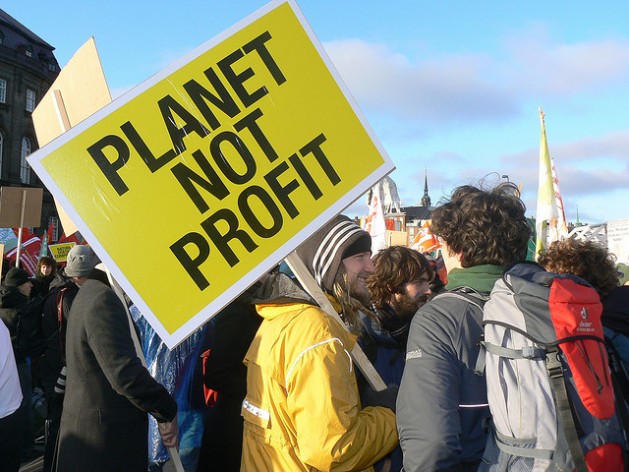 A scene from the Dec. 12, 2009 march in Copenhagen to ask world political leaders to be courageous, stop talking and act now. Nasseem Ackbarally /IPS

BONN, Jun 4 2015 (IPS) - I remember pretending not to be so excited. There was this nervous energy that kicked up my heels as I prowled through the U.N. negotiations that afternoon. You could feel it all around. Circling our meeting point like sharks quietly rounding our prey. If you knew what to look for, you would know exactly what was about to happen.

All it took was a side glance, and a slip of a white t-shirt, and the voices rose up.

The young people who were escorted out by security guards that day have returned home, only to be disappointed. For three years they have continued to raise their voices, only to watch them fall on the deaf ears of ageing politicians and old media conservatives.

For the rest of the afternoon, young people screaming out for climate justice with songs that rocked the South African Apartheid movement held the U.N. climate negotiations hostage.

That was back in 2012, on the last scheduled day of climate negotiations. Little did we know how important that one day would be.

For the next 48 hours, the energy that filled the metallic conference centre sent negotiators into a frenzy of compromise that has lasted until today.

Since young people’s voices rung free through the halls that fateful afternoon in Durban, the U.N. climate negotiations has kicked into rounds and rounds of discussions all leading to what many believe could be a game-changing climate agreement in Paris in December.

But the young people who were escorted out by security guards that day have returned home, only to be disappointed. For three years they have continued to raise their voices, only to watch them fall on the deaf ears of ageing politicians and old media conservatives.

As Avik Roy, a youth activist and writer from India, recently argued, “India is world’s largest democracy, but since the last year the state has actively been attempting to stifle the voices of activists that threatens to ask uncomfortable questions.”

Avik is a close friend of mine, and a journalist at that. He cares passionately about the fate of Indian’s impacted by climate change, especially the now more than 2000 people have died in recent heat waves.

But he is not alone.

In India, he is joined by young writers such as Dhanasree Jayaram, Mrinalini Shinde and Ritwajit Das who have all called out the Modi government in recent weeks for what they believe to be an obsessive compulsion towards coal expansion.

Not only has Dhanasree called out the Indian government’s for its domestic coal expansion and its impact on its citizens, but Mrinalini has given her voice to support the thousands of young people across India calling for an end to crony, state-sponsered coal development in Australia.

However, as Ritwajit, an environmental entrepreneur mentioned recently, anyone calling for environmental protection in India is immediately labelled “a roadblock for economic development”.

But their fight continues.

As it does across Latin America, where young people like Lais Vitória Cunha de Aguiar (Brazil), Itzel Morales (Mexico), Maria Rinaudo Mannucci (Venezuela) and Bitia Chavez (Peru) have been calling on their governments government to protect their long-term social and economic stability without exploiting their vast fossil fuel reserves (Add link).

Each of them faces unique battles. In Brazil, Lais is working to convince her fellow Brazilians that newly found oil reserves must be left in the ground. In Peru and Mexico, Bitia and Itzel continue to struggle to free their economies from the iron grip of fossil fuels which they believe they will be able to do one day.

Especially with support from those such as Santiago Ortega in Colombia and Stephanie Cabovianco in Argentina, who are trying to inspire “cultural change” across Latin America that may lead to the continent realising its incredible renewable energy opportunities.

Across the Western Hemisphere, the Divestment movement has been a key driver of that same cultural change around fossil fuels. In the UK, young people such as the UKYCC’s Freya Palmer and Entrepreneur David Saddington are on the front lines of these movements.

David believes that “the biggest challenge to stopping Fossil Fuel usage in the UK is the lack of debate surrounding our energy future”.

Rather than sit down and wait, it is young people like David and Freya who are driving these debates and supporting divestment movements such as those in Edinburg University.

The same goes for the U.S., where young people like Sarabeth Brockley and Alex Lenferna have been critical in driving the divestment movement across campuses from Seattle to Pennsylvania. Alex recently celebrated leading Seattle University’s decision to end their investments in thermal coal, and now has his sights set on spurring on the Divestment movement across Africa.

There, he’ll be relying on support from fellow South African Ruth Kruger to shift their home nation away from their “enormous coal reserves” and towards a policy future that doesn’t “trivialise things like human rights”.

To do so, they will have to challenge the narrative of divestment. In a recent think piece, Catalan activist, Anna Perez Catala argues that for the divestment movement to have an impact in her own region, it will need to incorporate a message of hope, and inspire opportunities for young people on the wrong side of an employment crisis.

This reality resounds across the EU, where young people such as Federico Brocchieri (Italy), Anton Jeckel (Germany) and Morgan Henley (The Czech Republic) have called out so-called European leaders in the climate change debate for their fondness to the fossil fuel industry.

However, the biggest divestment shift yet has come from Norway. This Friday, the Norwegian Sovereign Wealth Fund is expected to formally divest close to 900 billion dollars from fossil fuels.

This has come on the back of a long and passionate push from young people across Europe, but has been supported by people as far away as the Philippines. Campaigners there such as Denise Fontanilla argue that Norweigan foreign funds have funded between 50-70 percent of coal plants across the tropical island nation.

It is young people just like this, fighting battles that everyone else told them they could never win, that are the reason the tide is now turning against the Fossil Fuel industry.

Right now, being surrounded by such an amazing global family of young climate activists, I feel just as excited as I did back then, three years ago, screaming my lungs out.

With a growing movement of young writers all around the world calling on greater climate action from Madagascar, Trinidad and Tobago and even Tajikistan our calls are now louder than ever.