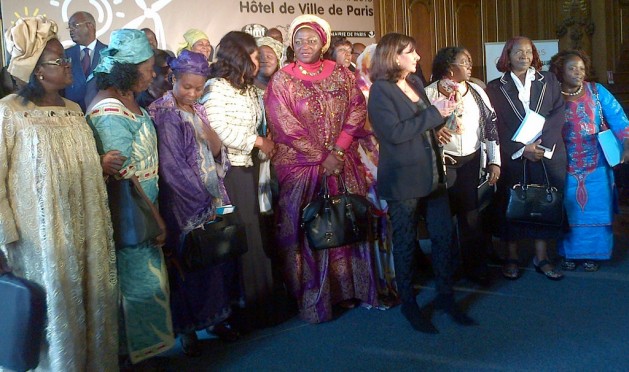 Paris Mayor Anne Hidalgo with African women mayors who are calling for greater attention to communities without electricity, given the inextricable link between climate change and energy. Credit: A.D. McKenzie

PARIS, May 18 2015 (IPS) - When some 40,000 delegates, including dozens of heads of state, descend on Paris for the United Nations Climate Change Conference later this year, a group of African women mayors plan to be there and make their voices heard on a range of issues, including electrification.

The mayors, representing both small and big towns on the continent, are calling for greater attention to communities without electricity, given the inextricable link between climate change and energy.

“In my commune, only one-fifth of the people have access to electricity, and this of course hampers development,” Marie Pascale Mbock Mioumnde, mayor of Nguibassal in Cameroon, told a recent meeting of women mayors in Paris.

“As mayors we’re closer to the population, and when we work together, there’s hope” – Marie Pascale Mbock Mioumnde, mayor of Nguibassal, Cameroon

Organisers said the meeting was called to highlight Africa’s energy challenges in the run-up to COP 21 (the 21st session of the Conference of the Parties to the 1992 United Nations Framework Convention on Climate Change), which will take place from Nov. 30 to Dec. 11 and which has the French political class scrambling to show its environmental credentials.

Mbock Mioumnde told IPS in an interview that clean, renewable energy was a priority for Africa, and that political leaders were looking at various means of electrification including hydropower and photovoltaic energy and, but not necessarily, wind power – a feature in many parts of France.

“We plan to maintain this contact and this network of women mayors to see what we can accomplish,” said Mbock Mioumnde. “As mayors we’re closer to the population, and when we work together, there’s hope.”

Hidalgo, the first woman to hold the office of Paris mayor, said she wanted to support the African representatives’ appeal for “sustainable electrification”, considering that two-thirds of Africa’s population, “particularly the most vulnerable, don’t have access to electricity.”

Currently president of the International Association of Francophone Mayors (AIMF), Hidalgo said it was essential to find ways to speed up electrification in Africa, using clean technology that respects the environment and the health of citizens.

The mayors meeting in Paris in April also called for the creation of an “African agency devoted to this issue” that would be in charge of implementing the complete electrification of the continent by 2025.

Present at the conference were several representatives of France’s big energy companies such as GDF Suez – an indication that France sees a continued business angle for itself – but the gathering also attracted NGOs which have been working independently to set up solar-power installations in various African countries.

“I’m happy that women are organising on this issue. We need solidarity,” said Hidalgo, who has been urging Paris residents to become involved in climate action, in a city that has come late to environmental awareness, especially compared with many German and Swiss towns.

“The Climate Change Conference is a decisive summit for the planet’s leaders and decision-makers to reach an agreement,” Hidalgo stressed.

Climate change issues have an undeniable gender component because women are especially affected by lack of access to clean sources of energy.

Ethiopian-born, Kenya-based scientist Dr Segenet Kelemu, who was a winner of the 2014 L’Oréal-UNESCO Awards for Women in Science, spoke for example of growing up in a rural village in Ethiopia with no electricity, no running water and no indoor plumbing.

“I went out to collect firewood, to fetch water and to take farm produce to market. Somehow, all the back-breaking tasks in Africa are reserved for women and children,” she told a reporter.

This gender component was also raised at a meeting May 7-8 in Addis Ababa, where leaders of a dozen African countries agreed on 12 recommendations to improve the regional response to climate change.

The meeting was part of a series of ‘Climate Vulnerable Forum (CVF)’ workshops being convened though June 2015 in Asia, Latin America, the Pacific and the Middle East. The CVF was established to offer a South-South cooperation platform for vulnerable countries to deal with issues of climate change.

In Paris, Hidalgo’s approach includes gathering as many stakeholders as possible together to reach consensus before the U.N. summit. With Ignazio Marino, the mayor of Rome, Italy, she also invited mayors of the “capitals and big towns” of the 28 member states of the European Union to a gathering in March.

The mayors, representing some 60 million inhabitants, stressed that the “fight against climate change is a priority for our towns and the well-being of our citizens.”

Hidalgo’s office is now working on a project to have 1,000 mayors from around the world present at COP 21, a spokesperson told IPS. The stakes are high because the French government wants the summit to be a success, with a new global agreement on combating climate change.

Borloo, who was environment minister in the administration of former president Nicolas Sarkozy, used to advocate for France’s “climate justice” proposal, aimed at giving financial aid to poor countries to combat climate change.

Calling for a “climate justice plan” to allow poor countries to “adapt, achieve growth, get out of poverty and have access to energy,” Borloo was a key French player at COP 15 in Copenhagen in 2009, but that conference ended in disarray. The question now is: will a greater involvement of women leaders and mayors make COP 21 a success?