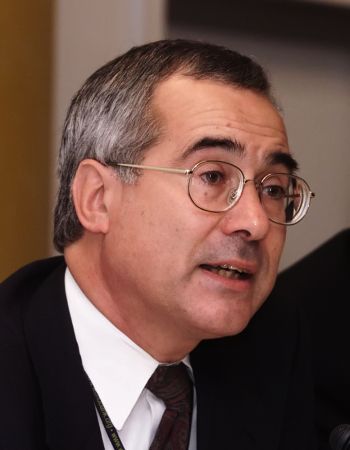 Nicholas Stern, a former chief economist of the World Bank and president of the British Academy, has called for a strong international climate agreement in Paris this year. Credit: public domain

The statement, issued Tuesday, points to overwhelming evidence that if humanity is to have a reasonable chance of limiting global warming to two degrees C, the world economy must transition to zero-carbon by early in the second half of the century.

Climate economist Lord Nicholas Stern, president of the British Academy, one of the signers, said it “demonstrates the strength of the agreement among the UK’s research institutions about the risks created by rising levels of greenhouse gases in the atmosphere.

“Our research community has for many decades been at the forefront of efforts to expand our understanding and knowledge of the causes and potential consequences of climate change,” he said.

“While some of our politicians and newspapers continue to embrace irrational and reckless denial of the risks of climate change, the UK’s leading research institutions are united in recognising the unequivocal evidence that human activities are driving climate change.”

The letter notes that the dangers are hardly theoretical, and in fact, many systems are already at risk. A two-degree rise would bring ever more extreme weather, placing entire ecosystems and cultures in harm’s way.

At or above 4 degrees, it notes, the world faces substantial species extinction, global and regional food insecurity, and fundamental changes to human activities that today are taken for granted.

It also stresses that addressing the problem has vast potential for innovation, for example in low-carbon technologies.

Also on Tuesday, the Vatican hosted mayors and governors from major world cities who signed a declaration urging global leaders to take bold action at the U.N. summit.

Mayors from South America, Africa, the United States, Europe and Asia signed a declaration stating that the Paris summit “may be the last effective opportunity to negotiate arrangements that keep human-induced warming below 2 degrees centigrade.”

Leaders should come to a “bold agreement that confines global warming to a limit safe for humanity while protecting the poor and the vulnerable,” said the declaration, which Pope Francis, who has taken a strong public stand on climate change, also signed.

California Governor Jerry Brown, who is in Rome this week, skewered climate change deniers in an interview with the Sacramento Bee, calling them “troglodytes.”

“Because the other side, the Koch brothers, are not sitting still,” Brown said. “They’re raising money, they’re supporting candidates, they’re putting money into think tanks, and denial, doubt and skepticism is being spewed through various media channels, and therefore the sincerity and the authority of the pope is a welcome antidote to that rather virulent strain of climate change denial.”

According to research by Greenpeace, Charles and David Koch (who also funded the right-wing U.S. Tea Party) have sent at least 79,048,951 dollars to groups denying climate change science since 1997.

“We don’t even know how far we’ve gone, or if we’ve gone over the edge,” Brown said in a speech at the Vatican climate summit. “There are tipping points, feedback loops, this is not some linear set of problems that we can predict.