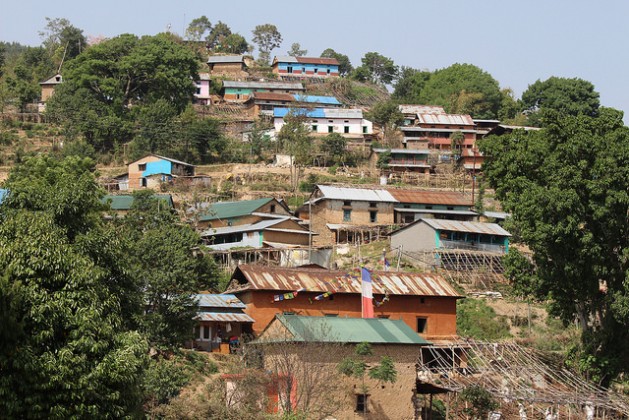 The district of Kavre in Nepal was one of the worst casualties of the Apr. 25 earthquake that devastated great swathes of this South Asian nation. Credit: Naresh Newar/IPS

UNITED NATIONS, Jul 9 2015 (IPS) - As Nepal’s monsoon rains approach, some humanitarian aid remains tied up in the capital Kathmandu and there are concerns that a rush to build shelters could lead to the same shoddy construction that collapsed during the Apr. 25 earthquake, a U.N. official said Wednesday.

John Ging, Operations Director of the U.N. Office for the Coordination of Humanitarian Affairs (OCHA), briefed the press about his three days spent in Nepal reviewing the state of the humanitarian situation, response and reconstruction two months after the 7.3 magnitude earthquake.

"From the outset of the disaster response, Nepalese people, as first responders, were helping each other regardless of gender or other considerations." -- Jamie McGoldrick

“In the urgency to rebuild, and in the impoverishment that is there, we have to be alert to the real danger of there being a ‘build back worse’ rather than a ‘build back better’,” Ging insisted.

So far, an appeal for 422 million dollars has only been 46 percent funded, he said. “We hope to see that mobilised very quickly because people cannot stand in the rain.”

The disaster affected around eight million people – almost one-third of the population of the country – resulting in extreme devastation, with 2.2 million people losing their homes.

Moreover, an estimated 1.5 million children have been directly affected by the impact of the earthquake on Nepal’s education system, with one million children now without a permanent classroom, Jamie McGoldrick, U.N. Resident Coordinator and UNDP Resident Representative in Nepal, told IPS.

“Humanitarian and other groups have adopted a ‘do no harm’ principle, where aid is distributed evenly to all communities but separately – physically separately,” added Thapa. “The Dalits queue up in a different line from the high castes.”

This separation confirms the deeply rooted caste system in Nepal which results in human rights abuses towards lower castes, and if not addressed in the Constitution it may prevent the goal of “building back better”, which Ging stated is strongly encouraged in humanitarian efforts.

The hurried drafting Nepal’s Constitution could also be an impeding factor to this goal, as it has been predicted to result in further human rights issues. The Preliminary Draft of the Constitution was approved by Nepal’s Constituent Assembly Jul. 7 although it was due to be completed in 2012.

“The draft as it stands is regressive, particularly on women’s rights, minority rights, identity rights, and press freedoms,” Thapa told IPS. “The current political position seems to be to move ahead with this constitution regardless, and hope that laws and practice will sort out the problems over the years, which is deeply worrying.”

“The constitution is the supreme law of the land and if rights are not protected through that document then there is little reason to believe there will be any further political will to amend the problems,” says Thapa.

“The U.N. stands ready to provide any technical assistance required to ensure compliance of the constitution with the international human rights instruments to which Nepal is a party,” says McGoldrick.

Despite these legal factors, U.N. officials assert that Nepalese communities are working together to assure the people in most need are prioritised and nobody is left behind.

“I commend local authorities and local organisations for their show of true humanity in the face of devastation, that made no distinction between any people,” Ging said.

“From the outset of the disaster response, Nepalese people, as first responders, were helping each other regardless of gender or other considerations,” McGoldrick affirmed, “Most notably, youth took a lead role in coordinating and delivering aid. Also, family members, friends, neighbours, business owners etc., all recognised their role to play in helping their fellow citizens.”

“The U.N., through the UNDAF, has conducted a thorough analysis of the most vulnerable groups in Nepal and addressed inclusion as a main tenet of its programming. This approach is continuing with the relief and recovery work,” McGoldrick explained.

“Aid is delivered based solely on need and in an equitable and principled manner. Moreover, all humanitarian programming was designed keeping in mind specific needs of vulnerable groups such as women, children, elderly and/or minorities; so as to ensure the aid is provided to them in an equitable and apolitical manner.”

Another preventative factor to ‘building back better’ could be Nepal’s massive debt to foreign lenders of about 3.8 billion dollars, according to the most recent World Bank numbers.

While the earthquake and its aftershocks caused damage amounting to about 10 billion dollars – about one-third of the country’s total economy, the country’s creditors have not agreed on a debt-relief settlement.

Nepal will not receive debt relief from the Catastrophe Containment and Relief Trust as it does not “fulfill the criteria of the fund”, says McGoldrick.

Nepal, one of the world’s least developed countries (LDCs), had a projected goal of 6.7 billion dollars for the next phase of rehabilitation and reconstruction of the destroyed infrastructure and services, and received 4.4 billion dollars in pledges at an international donor conference in Kathmandu two weeks ago, although that remains to be delivered.

“We still have a significant shortfall in our humanitarian appeal and we are asking member-states to redouble their effort,” Ging said.