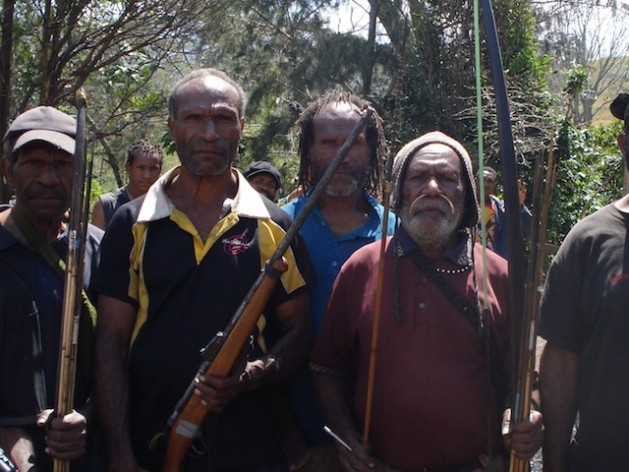 Tribal warriors who have been fighting a clan war for two months in Kenemote village say they want peace in the Eastern Highlands Province of Papua New Guinea. Credit: Catherine Wilson/IPS

GOROKA, Papua New Guinea, Aug 14 2015 (IPS) - The charred foundations are all that is left of the homes that made up Kenemote village in the mountainous Eastern Highlands Province of Papua New Guinea in the southwest Pacific Islands.

For the past four and a half months a tribal war has raged between four clans of the Kintex tribe who are armed with high-powered guns, as well as bows and arrows. Nine people are dead, including a small boy, and most dwellings have been burned to the ground, while women and children are traumatised.

Fighting erupted at the beginning of April after one clan accused another of using poison or sorcery to cause a death in the community. The victorious clan, still brandishing their weapons, are encamped among the ruins. The other three clans, numbering three quarters of Kenemote’s population of 1,500, have fled and are staying in squatter settlements in the nearby town of Goroka or with relatives scattered in other villages.

“We want peace when we see the houses burning and properties destroyed, but the other clans’ people continue to come and provoke us. It will take years to recover the loss we have gone through, so we want peace, but we don’t know who can bring this peace,” Chief Lim Nareo declared to IPS on Jul. 30.

A police mediation team and the Eastern Highlands branch of the Red Cross are attempting to broker a ceasefire. But until that happens, Chief Nareo’s people won’t leave the area because of the risk of further attacks, and those displaced are unable to return.

For the past two years, the Red Cross has devoted enormous quantities of resources to helping people caught up in ongoing fighting in at least four of the province’s eight districts, providing temporary shelter, access to medical care, water and food supplies.

Meanwhile, in a province of about 579,000 people, the local police say they are trying to address at least 30 separate conflicts. 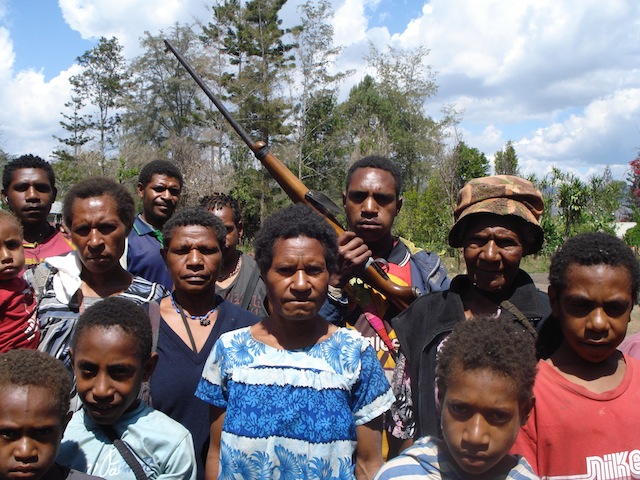 Women and children have suffered fear, insecurity and lack of food since a clan war started two months ago in Kenemote village in Eastern Highlands Province in Papua New Guinea. Credit: Catherine Wilson/IPS

The human toll and suffering due to tribal fighting has escalated in the last 20-30 years with greater access to modern high-powered weapons. Today international and local gun smuggling networks provide villagers with a supply of M-16s, AK-47s, 0.22 rifles and grenades.

Many highlanders claim that guns are needed for their personal security and that of their businesses and communities because of lack of reach of the state, particularly law enforcement, in rural areas where more than 80 percent of the country’s population live.

However, guns have also become a major symbol of status and power for men and youth.

The consequences are increasingly tragic, Robin Kukuni of the Eastern Highlands Red Cross said, because most villagers “haven’t had any firearms training, so they just fire their guns indiscriminately and a lot of women and children are dying.”

Traditional warfare has existed in Papua New Guinea, home to a population of 7.3 million and an estimated 1,000 different ethnic and linguistic groups, for thousands of years.

Hostilities can be triggered by disputes over land, pigs (the most prized livestock animal), or ‘payback’ for a wrong committed by one clan against another.

Even after 40 years of modern statehood, most citizens are still bound by clan allegiances, and customary ways of dealing with disputes remain paramount, particularly in rural communities.

But today conflicts are also complicated by grievances over access to royalties, benefits and compensation associated with resource extraction projects in the country, whether mining, gas extraction or logging. And the ritualised nature of traditional combat, which included rules such as a ban on violating women and children, has given way to guerrilla tactics with worsening atrocities fuelled by drug and alcohol abuse.

The long-term impacts include protracted internal displacement, in many cases for up to 10 years.

The Internal Displacement Monitoring Centre (IDMC) estimates there are about 22,500 people displaced within Papua New Guinea as a result of tribal warfare and natural disasters. But the International Committee of the Red Cross believes the true figure could be more than five times that estimate, or more than 110,000 people. 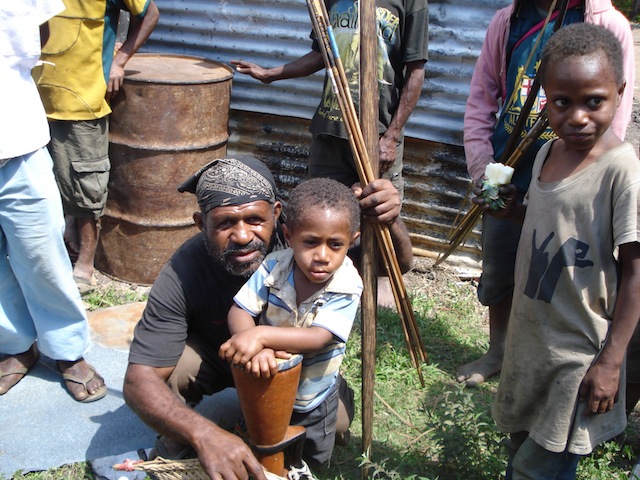 Lilly Be’Soer, leader of Voice for Change, a women-led non-governmental human rights and sustainable livelihoods organisation involved in conflict resolution in nearby Jiwaka Province, emphasises that the process of peace mediation, reconciliation, resettlement and integration is a very long one.

In 2012, Voice for Change brokered a peace agreement in the province between two clans of the Kondika tribe who had been warring since 2009 when a clansman was killed during New Year’s Eve celebrations.

Be’Soer says that a number of strategies contributed to the success of their peace negotiations following four previous attempts by other parties, which failed.

But a significant breakthrough was made when the organisation brought together and mentored women from the displaced communities, so that they could speak in public to gatherings of the men, village chiefs and police about their hardships, such as increasing poverty and insecurity.

Ultimately they “told the men [who had been fighting] that this situation has happened and you have caused this problem […]. This was one of the strategies we used that impacted and moved the men, who then said they would move forward [and support peace],” Be’Soer recounted.

But resettlement of the 500 people who were displaced due to hostilities is an ongoing challenge.

“When we were interviewing the [displaced] women, the bottom line was that they wanted to go back to their husbands’ traditional land, because when you are on your husband’s land you have a certain status and security. And the women felt that if they continued to live on other people’s land, the land might not be available for their sons,” she continued.

After lengthy consultations between all the stakeholders, an agreement between the displaced people and those occupying their land was reached. The resettlement plan entailed a set of conditions to be adhered to by both clans, such as vacation of the occupied territory within six months and a ban on either clan being derogatory toward the other.

But “the conditions were not honoured and then law enforcement [of the conditions] didn’t work,” Be’Soer said.

The suffering is now prolonged for the displaced families.

According to Be’Soer, “Children are very [badly] affected; they don’t have proper meals and are unable to go to school. The women cannot walk around freely and it is very difficult for them to access money and food.”

And there are heightened risks of sexual violence against women, a grim reality in a country that is ranked 135 out of 187 nations for gender inequality.

“The men in the host communities are the main perpetrators; or the man who is taking care of the family, he might want the daughter and you don’t have security,” Be’Soer said.

A second attempt at returning the families will be made within the next month, but, even if that succeeds, there are further cultural obligations to be met before the process is complete.

“In the final stage compensation has to be paid for the people who have been killed. Once this has been done in about four or five years, then the clans will have to find enough pigs to slaughter to give to the people they stayed with when they were displaced. So it takes a long time, another four, five, or even ten years,” Be’Soer told IPS. 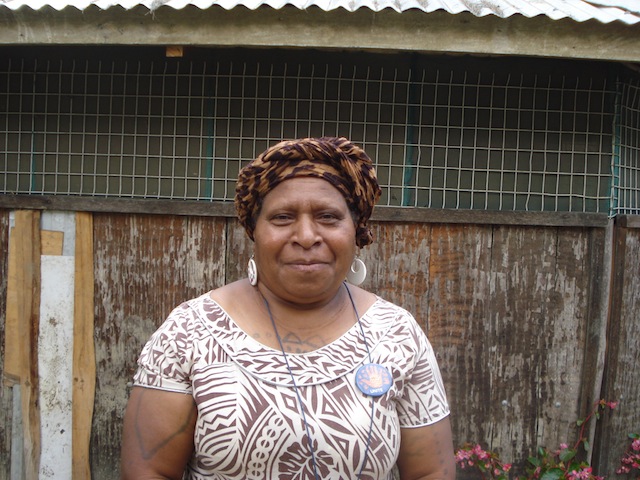 The cumulative cost of both the destruction and displacement from dozens of small-scale clan wars occurring across the country includes the undermining of human development and entrenchment of hardship and inequality in rural families and communities.

Looking to the future, Kukuni at the Red Cross believes there is a need to prevent the escalation of violence in the first place, adding, “The village courts and community leaders could do more to stop a conflict in the early stages before it grows bigger.”

Voice for Change also emphasises the importance of aiming for generational change by educating the country’s youth to fully understand the long-term impacts of violence on their lives and empowering them with the ability to intervene and implement alternative ways of resolving disputes.