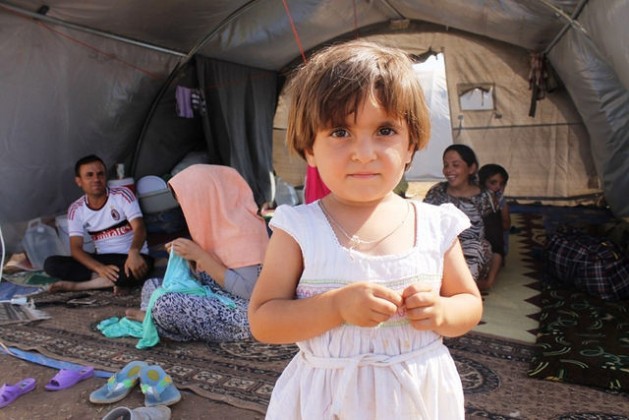 The ongoing crisis in Iraq has spurred a refugee crisis of “unprecedented” proportions, with over 3.1 million forced into displacement since January 2014 alone, according to the U.N. Refugee Agency.

IDPs are scattered across 3,000 locations around the country, with many thousands in remote areas inaccessible by aid workers, said a joint statement released Monday by the U.N. High Commissioner for Refugees (UNHCR), together with the World Food Programme (WFP) and the Office for the Coordination of Humanitarian Affairs (OCHA).

In total, 8.2 million Iraqis – nearly 25 percent of this population of 33 million – are in need of humanitarian assistance.

Speaking to IPS over the phone from the northern Iraqi city of Erbil, Kareem Elbayar, programme manager at the U.N. Office of Project Services (UNOPS), which is running the call center, explained that the new service aims to provide life-saving data on almost all relief operations being carried out by U.N. agencies and humanitarian NGOs.

Still in its pilot phase, the Erbil-based center can be reached via any Iraqi mobile phone by dialing 6999.

“We have a total of seven operators who are working a standard working day, from 8:30am to 5:30pm [Sunday through Thursday]. They speak Arabic, English and both Sorani and Badini forms of Kurdish,” Elbayar told IPS.

The number of calls that can be routed through the information hub at any given time depends on each individual user’s phone network: for instance, Korek, the main mobile phone provider in northern Iraq, has made 20 lines available.

“That means 20 people can call in at the same time, but the 21st caller will get a busy signal,” Elbayar said.

Other phone providers, however, can provide only a handful of lines at one time.

Quoting statistics from an August 2014 report by the Communicating with Disaster Affected Communities (CDAC) network, Elbayar said mobile phone penetration in the war-ravaged country is over 90 percent, meaning “nearly every IDP has access to a cell phone” – if not their own, then one belonging to a friend or family member.

Incidentally, it was a recommendation made in the CDAC report that first planted the idea of a centralized helpline in the minds of aid agencies, made possible by financial contributions from UNHCR, the WFP, and OCHA.

Elbayar says pilot-phase funding, which touched 750,000 dollars, enabled UNOPS to procure the necessary staff and equipment to get a basic, yearlong operation underway.

It was built with “expandability in mind”, he says – the center has the capacity to hold 250 operators at a time – but additional funding will be needed to extend the initiative.

Establishing the hotline is only a first step – the harder part is getting word out about its existence.

Relief agencies are putting up flyers and stickers in camps, but 90 percent of IDPs live outside the camps in communities doing their best to protect and provide for war-weary civilians on the run, according to OCHA’s latest Humanitarian Response Plan for Iraq.

“Both the Federal Iraqi Government and the Kurdistan Regional Government have offered to do a mass SMS blast to all the mobile phone holders in certain areas,” Elbayar explained, “so we hope to be able to send a message to every cell phone in Iraq with information about the call center.”

Violence and fighting linked to the territorial advance of the Islamic State in Iraq and the Levant (ISIL) and the government’s counter-insurgency operations have created a humanitarian crisis in Iraq.

The 2015 Humanitarian Response Plan estimates that close to 6.7 million people do not have access to health services, and 4.1 million of the 7.1 million people who currently require water, sanitation and hygiene services are in “dire need”.

Children have been among the hardest hit, with scores of kids injured, abused, traumatized or on the verge of starving. Almost three million children and adolescents affected by the conflict have been cut off from schools.

Fifty percent of displaced people are urgently in need of shelter, and 700,000 are languishing in makeshift tents or abandoned buildings.

In June OCHA reported, “A large part of Iraq’s cereal belt is now directly under the control of armed groups. Infrastructure has been destroyed and crop production significantly reduced.”

As a result, some 4.4 million people require emergency food assistance. Many are malnourished and tens of thousands skip at least one meal daily, while too many people often go an entire day without anything at all to eat.

Whether or not the helpline will significantly reduce the woes of the displaced in the long term remains to be seen, as aid agencies grapple with major funding shortfalls and the number of people in need shows no sign of declining.