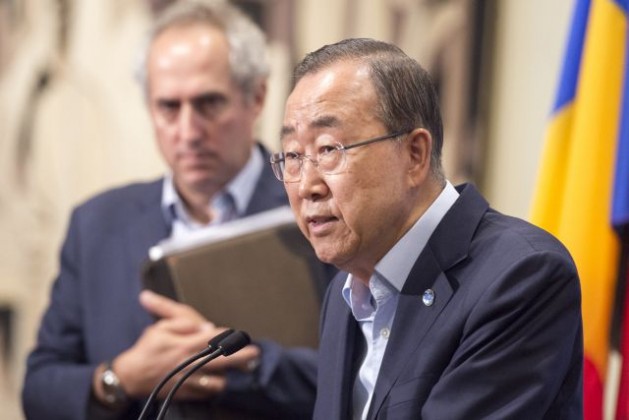 UNITED NATIONS, Aug 13 2015 (IPS) - It was two a.m. on Aug. 2 as peacekeeping forces from the U.N. Multidimensional Integrated Stabilization Mission in the Central African Republic (MINUSCA) searched for a criminal suspect in the PK5 Muslim enclave of the capital city of Bangui.

As one house was searched, the men were taken away, the women and crying children were brought together by yelling troops, and a 12-year-old girl hid in the bathroom out of fear, according to accounts by the girl and her family.

"It is a small minority of troops who are directly responsible. However it is a system-wide problem. The people who commit these abuses think they can get away with them." -- Joanne Mariner

The girl was allegedly dragged out of the bathroom by one of the blue-helmet troops, where she says she was groped, taken behind a truck and raped. A medical examination later found evidence of sexual assault.

“When I cried, he slapped me hard and put his hand over my mouth,” the girl told Amnesty International.

One of her sisters recalled: “When she returned from the back of the courtyard, she cried ‘mama’ and fainted. We brought her inside the house and splashed water on her to revive her.”

“I had her sit in a pan of hot water,” the mother explained — a traditional method of treating sexual abuse.

Amnesty International heard about the incident almost immediately, and spent the past week conducting an intensive investigation.

If the allegations prove to be true, it would not be the first incident of misconduct and abuse by U.N. peacekeepers in the Central African Republic (CAR). In May, leaked documents showed that high-level U.N. staff knew of sexual abuses by soldiers in CAR and failed to act, all while planning the removal of U.N. whistleblower Anders Kompass.

The documents showed that the U.N. Children’s Fund (UNICEF) had evidence of abuse by the soldiers on May 19, 2014. Then, during a June 18 interview, a 13-year-old boy said he couldn’t number all the times he’d been forced to perform oral sex on soldiers but the most recent had been between June 8 and 12, 2014 – several weeks after the first UNICEF interview.

Twenty-three soldiers from France, Chad and Equatorial Guinea were implicated in the abuse, according to one of the reports. In June, the U.N. set up an External Independent Review (EIR) to probe the allegations.

In addition to the alleged rape of the 12-year-old girl, the more recent incident included the fatal shootings of two civilians, a young boy and his father.

Balla Hadji, 61, and his son Souleimane Hadji, 16, were struck by bullets in front of their house. Balla was apparently shot in the back, while Souleimane was shot in the chest. A neighbour who witnessed the killings told Amnesty International that “they [the peacekeepers] were going to shoot at anything that moved.”

On Wednesday, U.N. Secretary General Ban-Ki Moon announced that the U.N. envoy to CAR, Babacar Gaye, had resigned his post.

“The initial response of the U.N. was very lackadaisical,” Amnesty International’s Senior Crisis Response Advisor, Joanne Mariner, told IPS. “It wasn’t until we issued a press release and it got international attention that suddenly the system kicked in and action was taken.”

“It is a small minority of troops who are directly responsible. However it is a system-wide problem. The people who commit these abuses think they can get away with them. They are not trained well enough to carry out their duties in the appropriate way.”

She noted that “The U.N. has no power to prosecute them, and that does create a structural tension. It’s the U.N.’s responsibility to put pressure on its Member States to prosecute these individuals.”

“We have not seen the U.N. being vigilant or active enough on these issues. There has been much more talk than real action,” Mariner said. “We are just trying to make sure that the UN is doing what it should be doing.”

U.N. Secretary General Ban-Ki Moon said, “I want to be clear that this problem goes far beyond one mission or one conflict or one person. Sexual exploitation and abuse is a global scourge and a systemic challenge that demands a systemic response.”

He said sexual abuse and exploitation in Central African Republic would be investigated further by a high-level external independent panel, and he urged victims to feel safe in coming forward.

“I have been often asking Member States to provide more female police officers, because many victims feel very shamed in coming out to bring these crimes, so we really need to have these victims come out.”

“I will not tolerate any action that causes people to replace trust with fear. Those who work for the United Nations must uphold our highest ideals,” Ban said, adding that the forces are not completely accountable to the U.N., but to their home countries.

“I want Member States to know that I cannot do this alone,” Ban added. “They have the ultimate responsibility to hold individual uniformed personnel to account and they must take decisive preventive and punitive action. They should be brought to justice in accordance with their national laws.”

“Before [troops] are being deployed, [Member States] should educate and train them properly for the importance of human rights and human dignity.”