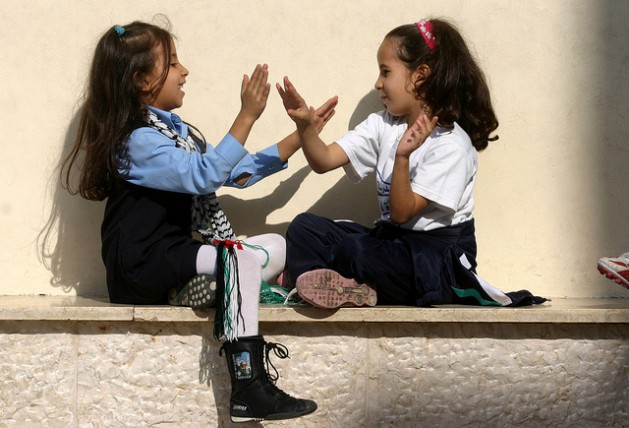 Schoolgirls play with each other in Gaza. Scores of Palestinian children and refugees are dependent on the international humanitarian community for their education needs. Credit: Mohammed Omer/IPS

UNITED NATIONS, Aug 19 2015 (IPS) - Overcoming a serious funding shortfall, and caught between numerous regional conflicts, the United Nation’s humanitarian agency for Palestinian refugees announced on Aug. 19 that it would nevertheless open schools on time for the roughly half-a-million children who rely on the international community for their education.

In a statement released today, the cash-strapped U.N. Relief and Works Agency for Palestine Refugees in the Near East (UNRWA) promised to start the school year on schedule, allowing over 500,000 kids in Palestine, Jordan, Lebanon and Syria to return to their classrooms between Aug. 24 and Sept. 13.

Established in 1949 to address the needs of some five million Palestinian refugees, UNRWA runs 685 schools across Gaza, the West Bank and neighboring Arab countries.

“It is on the benches and behind the desks of UNRWA classrooms that millions of Palestine refugees, deprived for so long of a just and lasting solution, have built the capabilities and shaped the determination that enabled them to become actors of their own destinies,” the agency said in a press release issued Wednesday.

For months both UNRWA and U.N. Secretary-General Ban Ki-moon have stressed the importance of uninterrupted schooling for Palestinian refugees, and warned of the risks of allowing a generation of young people to be forgotten.

Congratulating UNRWA on its tireless efforts, Ban said in a statement Wednesday, “This achievement cannot be underestimated at a time of rising extremism in one of the world’s most unstable regions”, adding: “[For Palestine refugees] education is a passport to dignity. We must stand by them and the agency that serves them.”

Ban thanked member states for their contributions to UNRWA’s coffers, which include a 19-million-dollar contribution from Saudi Arabia and 15 million dollars each from Kuwait, the United Arab Emirates and the United States.

To date, the agency has received contributions amounting to 78.9 billion dollars, or just over 75 percent of the 101-million-dollar deficit. The money will go towards fulfilling UNRWA’s mandate of providing health care, relief and social services, camp improvement and education.

Numerous obstacles stand between Palestinian children and their classrooms. In documenting some of these challenges, the United Nations Children’s Fund (UNICEF) lists such issues as military incursions; demolitions of schools buildings; restrictions on movement or limited access to school premises; and damage and destruction of school property.

A 2013 UNICEF report entitled Education Under Occupation revealed that 38 schools serving approximately 3,000 children in Area C of the West Bank and East Jerusalem “have been issued either verbal and/or written stop-work or demolition orders by the Israeli Civil Administration (ICA).”

In the 2011-2012 period, UNICEF recorded 63 instances of “denial of access” to education in the Occupied Territories, which affected over 34,000 Palestinian students.

During the seven-week-long conflict in Gaza last summer some 327 schools were partially or completely obliterated, according to a 2015 UNICEF update, stripping thousands of kids of their only protective environment.

The situation is even more precarious for Palestinian refugees, who are often closer to the frontlines of conflict and thereby face greater risks in their quest to gain a decent education.

For instance in the besieged Yarmouk refugee camp in Syria, home to an estimated 16,000 Palestinians, all 28 schools have been closed and the only education opportunities exist in the form of informal classes conducted by volunteer teachers in 10 “safe spaces”, according to a report by the Guardian.