UNITED NATIONS, Sep 24 2015 (IPS) - Latin America’s largest economy, Brazil, has succeeded in lifting 36 million people out of extreme poverty over the past 12 years. But it has still a long way to go towards promoting inclusive and sustainable growth.

Financial crisis and fiscal austerity goals resulting in a cut to the 2015 budget of almost USD23 billion may imperil social achievements, according to experts.

At the heart of Brazil’s poverty relief accomplishments is an exemplary programme known as ‘Bolsa Família’ (Family Allowance) that combats inequality and addresses malnourishment by providing funds at the disposal of the most vulnerable sections of the population.

According to official data, this largest conditional cash transfer programme worldwide succeeded in reducing chronic poverty: from 8 percent of the Brazilian population in 2002 to 1 percent in 2013.

“Brazil is presently in a difficult situation. The world is undergoing a crisis and we are not immune to it. We are undergoing important fiscal adjustment. But social policies will still be in progress, they won’t be stagnant. We cannot let the social achievements fall by the wayside”, Tereza Campello, the Brazilian Minister for Social Development and the Fight Against Hunger, told IPS. 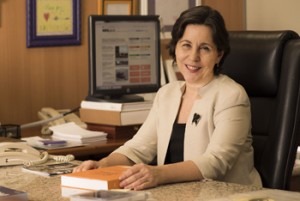 Campello said the government would keep untouched next year’s USD 7,3 billion planned budget for Bolsa Família – an increase from USD 6,3 billion spent in 2014. This amount is equivalent to 2.4 per cent of the total government.

“We are designing strategies to broaden public policies without amplifying the expenses. It is time to make great efforts to reduce spending. Bolsa Família costs only 0.5 per cent of Brazil’s GDP (Gross Domestic Product),” but benefits relatively a large number of the people in dire need of help, Campello told IPS.

The project assists 13.9 million families with an average income of USD40 per capita, that is, 50 million people are directly getting the benefits of this cash transfer program. Each family receives a monthly average amount of USD 42 as a supplementary income.

These and related aspects of the programme were highlighted at a seminar on Sep. 18 at the U.N. headquarters in New York. Representatives of the Brazilian government, the Central Union of Favelas (CUFA), researchers and multilateral organizations attended the seminar. The event drew attention to the emergent country’s groundbreaking efforts at social inclusion ahead of the Post-2015 Agenda summit this week.

Campello told participants that the Brazilian experience in pulling people out of poverty is serving as a model not only for countries in Latin America, but also in Africa: Senegal, Mozambique, Malawi, Ethiopia and Niger.

“We have been cooperating with more than 70 countries during the previous twelve years, and receiving international delegations almost every week,” Campello said.

Last year marked a historic milestone when Brazil was removed from the U.N. Hunger Map. According to the State of Food Insecurity report released by the Food and Agricultural Organisation (FAO) of the United Nations, the number of undernourished Brazilians declined by 82 per cent in a decade.

“It was a great victory. We reduced poverty in such an unusual way. In 2002, 10 per cent of the population was undernourished. In 2012, the percentage decreased to 1.7 per cent,” Campello told participants.

The success of Bolsa Familia, according to Campello, lies in the fact that it also works well in rural areas, in the semiarid or tropical regions and, above all, in shanty towns and the so-called ‘favelas’ in urban centres.

“What is happening in Brazil can be worth emulating to the rest of the world, not only in the South but also in the North. The challenge is to avoid that people slide back into poverty. It is a crucial point if we are to achieve sustainable development,” stated Yamina Djacta, the director of the New York office of UN-Habitat (United Nations Human Settlements Programme).

However, barriers to social equality also plague Brazil’s big cities, where some 12,3 million people are living in slums. At least 53 per cent of favela dwellers starved once in their lives, according to Data Favela – the first research institution focused on data collecting from Brazilian slums.

These figures are baffling when it is proved that 60 per cent of favelas dwellers are Afro-descendants and more than 70 per cent had to lie about their home address so as to get a job. One in four residents of Brazilian favelas are beneficiaries of the Bolsa Família.

According to experts, favelas continue to be regarded as invisible territories and people living there are face huge social prejudices.

“Brazil is an international reference of cash transfer programs because it gives a holistic vision aiming to integrate poor people living in urban areas. Nevertheless, it is still important to transform those people into protagonists with a voice in the process of development,” declared the World Bank Senior Specialist for Social Protection and Labor, Maria Concepción Steta, at the seminar.

“If we don’t share wealth generated together with the favelas’ population, we will still be discussing social gap and inequalities for years to come,” agreed Celso Athayde, one of the founders of Central Union of Favelas Global Network (CUFA).

Established 20 years ago in Rio de Janeiro, CUFA targeted young people from favelas. It is now operating across all Brazilian states by empowering poorest communities with new economic opportunities. Over 300,000 young people have found succour from CUFA.

The institution is spread over 17 countries and has just launched its first overseas office in The Bronx, New York, aiming to link urban development organizations, share expertise and amplify the voice of people living in slums around the world.

The 52-year old activist and social entrepreneur, Celso Athayde was born in the poor suburbs of Rio de Janeiro. As son of alcoholic parents he lived a great part of his childhood on the streets. “I decided to become a revolutionary and I noticed that I would only be someone if I studied and went to school,” he told seminar participants at the U.N. headquarters.

Athayde has a dream: he wants to draft the Slums Development Goals for the next ten years. “Favela dwellers need to be able to demand public policies. We are starting to hear people in Brazilian favelas and to gather demands to get concrete commitments from public authorities”, Athayde told IPS. (END)