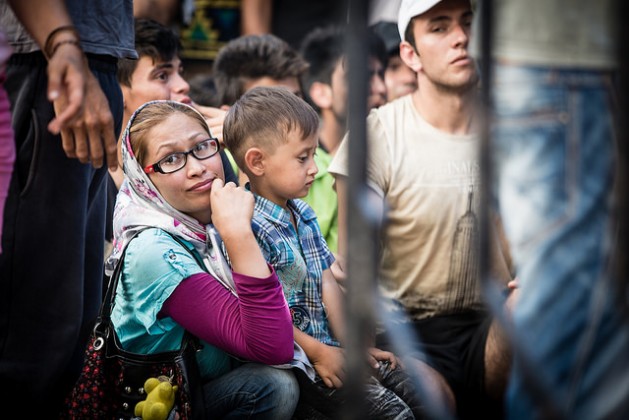 A woman waits with her son outside the registration centre in Kos, just kilometres from the Turkish coast. For Syrians, the process is now easier, thanks to a ship-based registration centre docked at the island. For others, like this woman, the wait continues. So far in 2015, 160,000 migrants have arrived in Greece, already almost four times more than in the previous year. Credit: Photo: Stephen Ryan/IFRC

UNITED NATIONS, Sep 8 2015 (IPS) - As Western and Central European nations seem overwhelmed by the growing refugee crisis – triggered mostly by the inflow of hundreds and thousands of displaced people largely from Syria, Libya, Afghanistan and Iraq – one lingering question remains unanswered: why aren’t some of the rich Arab Gulf nations reaching out to help these hapless refugees?

The U.N. Committee on the Protection of Migrant Workers, the lead United Nations body dealing with issues relating to migrants, says millions of people have been forced to migrate from their homeland in search of safe havens abroad due to the on-going war in Syria.

“The central question for Europe is: In the coming years will the migrants and their families be successfully integrated into European societies?” -- Joseph Chamie

“While neighbouring States have opened their borders to millions of Syrian migrants, other countries, especially in Europe and elsewhere, notably the Gulf States, should do more to address one of the most tragic mass displacements of people since World War II,” says the Committee.

Joseph Chamie, an independent consulting demographer and a former director of the United Nations Population Division, told IPS some neighbouring countries, such as Jordan, Lebanon and Turkey, have accepted very large numbers of refugees (according to U.N. figures, over 3.5 million people).

However, other nearby countries, notably Israel and the Arab Persian Gulf countries, have not been willing to accept the current refugees, he said.

The primary reason for the non-acceptance, he pointed out, is apparently the refugees are viewed as politically destabilising.

“The Gulf countries have admitted large numbers of South Asians and North Africans who are not considered immigrants, but temporary foreign workers who are expected to return to their homes. Also, Israel has accepted refugees in the past, but virtually all have been Jewish,” said Chamie, who has worked at the U.N. on population and migration issues for more than a quarter century and was also a former director of research at the Center for Migration Studies in New York and editor of the International Migration Review.

The Gulf nations which have virtually ignored the refugee crisis include Saudi Arabia, Bahrain, Oman, Qatar and the United Arab Emirates.

However, in a statement issued Tuesday, the International Organisation for Migration (IOM) said Kuwait, under the leadership of Sheikh Sabah Al Ahmad Al Jaber Al Sabah, has hosted three annual pledging conferences since 2013.

As a result, billions of dollars have been raised in order to support the humanitarian response to the Syrian crisis, with the participation of 78 member states and 38 humanitarian organisations.

Israeli Prime Minister Benjamin Netanyahu has already declared that Israel is a “very small country that lacks demographic and geographic depth”, but pointed out Israel is not indifferent to the human tragedy of the refugees from Syria and Africa.

“We have already devotedly cared for approximately 1,000 wounded people from the fighting in Syria, and we have helped them to rehabilitate their lives. We must control our borders, against both illegal migrants and terrorism,” he said.

With about eight million people, Israel has been described as a country founded mostly by refugees. But it is now building a new fence, about 18 miles long, along its border with Jordan to ward off “illegal migration and hostile infiltrations.”

“We must control our borders, against both illegal immigrants and terrorism,” Netanyahu said after a Cabinet meeting last week.

His statement drew strong criticism from Isaac Herzog, head of the main opposition Zionist Union party, who recounted the history of the Jewish people seeking safe haven from persecution: “Our people experienced first-hand the silence of the world. You have forgotten what it is to be Jews: Refugees. Persecuted.”

“The prime minister of the Jewish people would not shut his heart and the gates when people are fleeing for their lives, with babies in their arms, from persecutors,” said Herzog.

In a statement released Monday the U.N. Committee said Syrian migrants, pushed to take extreme action in search of secure and decent lives for their families, are literally putting their lives at risk to reach Europe.

“Hundreds of men, women and children have died while trying to reach safe shores. This is unconscionable in the view of the Committee.”

“We are once again shocked and dismayed at the appalling loss of life in the Mediterranean Sea”, Committee Chair Francisco Carrion Mena said following the latest drowning of Syrian migrants off the coast of Turkey last week – even as the Committee was meeting in Geneva.

Chamie told IPS It should come as no surprise that people are migrating. Given the current state of the world, the question should be: “Why aren’t more people migrating?”

In addition to globalisation, communication technologies and social media, powerful push/pull forces are operating to produce the current migration flows: poverty, violence, corruption, unemployment, repression and rapid population growth on the one side versus wealth, jobs, safety, social services, freedom and population decline on the other, he added.

While everyone has the right to leave their country, Chamie said, they do not have the right to enter another country. This paradox is the “Catch-22” that the growing numbers of migrants and destination nations are confronting.

The supply of potential migrants, who are free to leave their homelands, simply greatly exceeds the demand for migrants, which is set by the receiving countries. If people cannot enter a country as legal migrants, then many are choosing to enter illegally or overstay their legal visit, he noted.

“Today many migrants are indeed refugees as they are coming from worn-torn countries. And there are large numbers who are not strictly refugees, but are seeking improved economic opportunities and more secure living conditions for themselves and their families.”

He said many are wondering what will be the consequence of the current migration flows. These migratory flows are not going to stop any time soon and with them will come significant demographic, social, economic, political and cultural changes.

“The central question for Europe is: In the coming years will the migrants and their families be successfully integrated into European societies?” Chamie said.

And for the international community the key question is how to effectively address the root causes of the recent migration surges. In the recent past, the receiving countries have largely been unwilling to address these matters at the global level.