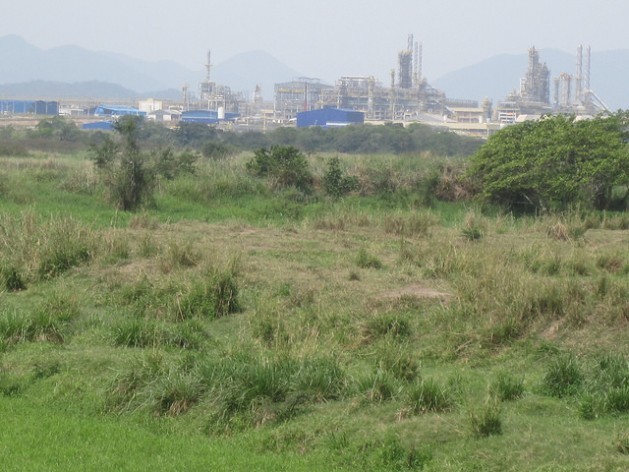 Part of the Rio de Janeiro Petrochemical Complex (COMPERJ) in October, seen from the banks of the Caceribu river, the closest to the installations that the public can get. Credit: Mario Osava/IPS

ITABORAÍ, Brazil , Oct 29 2015 (IPS) - Working as a musician in a military band is the dream of 21-year-old Jackson Coutinho, since hopes that a petrochemical complex would drive the industrialisation of this Brazilian city near Rio de Janeiro have gone up in smoke.

“I’ll try out for the navy, army and even the military police, but only to be a musician, not a police officer,” said Coutinho, who plays the double bass in bands he has set up with friends in Itaboraí.

Until last year he was working for the QGIT consortium on the construction of the Rio de Janeiro Petrochemical Complex (COMPERJ). He was a machine operator assistant on the embankment where the Natural Gas Processing Unit (UPGN), part of the complex, was built.

But he lost his job in early 2015, when lay-offs intensified as a result of the crisis faced by Petrobras, the state oil company that owns COMPERJ.

The initial projected cost of the megaproject was 6.5 billion dollars. But with cost overruns it has risen to twice that amount, even though the project was reduced drastically to a single refinery and the UPGN.

The most expensive part, the petrochemical plant, which would have fuelled industrialisation in this city 45 km from Rio de Janeiro, was cancelled because Petobras did not manage to find partners.

The plunge in oil prices and the corruption scandal shaking the company since March 2014, implicating dozens of politicians and businesspersons for billions of dollars in kickbacks, smothered the plan to build in Itaboraí the biggest petrochemical complex in Latin America.

The losses are huge. “Of 14 plants or buildings where I worked on the construction, only four or five will be used,” said Rogerio Henrique Lourenço, 26, a building technician who was employed by the COMPERJ works for five years.

Besides the white elephants – the shiny modern buildings still empty within the 45 square kilometres of the shrunken megaproject – equipment was purchased and infrastructure was built, which require costly maintenance while the future remains uncertain.

To that is added the expense of the compensation and mitigation of the social and environmental impacts, which has included sanitation, clean-up of rivers, and reforestation – obligations that have not shrunk in accordance with the downsizing of the project.

The municipalities under the influence of COMPERJ, especially Itaboraí, are losing the prospect of development promised in 2006, when then president Luiz Inácio Lula da Silva (2003-2010) announced the project.

At the time he said it would consist of two refineries and two petrochemical units, besides installations for services and training of the necessary technical personnel.

The Getulio Vargas Foundation, a leading economic think tank, predicted that the petrochemical complex would foment the emergence of a plastics industry hub. According to its projections, between 362 companies – a conservative estimate – and 724 companies – a more optimistic forecast – would set up shop in the area.

That fast-forward industrialisation was expected to generate between 117,000 and 168,000 jobs in the southeastern state of Rio de Janeiro – just over one-third of which were to be concentrated in COMPERJ’s direct area of influence.

Itaboraí, as the city where COMPERJ is located, was to reap the greatest benefits, leaving behind its status as one of the poorest municipalities in the state – a commuter town whose residents work in neighbouring cities. 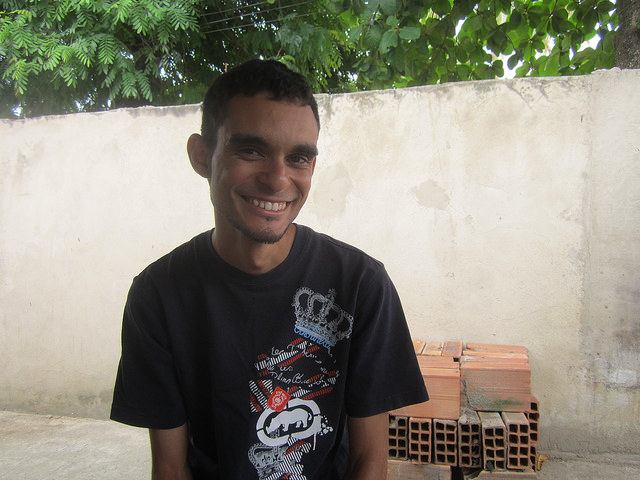 Jackson Coutinho, 21, managed to buy a car after working 18 months in a construction company helping to build the Rio de Janeiro Petrochemical Complex (COMPERJ) in Brazil. Now unemployed, the dream of this worker from the city of Itaboraí is to join a military band as a musician, and study accounting. Credit: Mario Osava/IPS

“The castle came crumbling down,” said Lourenço, who was laid off in March 2014, when construction of the petrochemical complex began to run out of steam.

The father of three young children now gets by with casual work, mainly on small-scale construction sites. When he talked to IPS he was handing out pamphlets on the main street of Itaboraí.

His dream is to pass a civil service exam and become a public employee, with job stability.
“In COMPERJ I had well-paid jobs, but they were temporary,” he said. His five years there were divided between short-term contracts in a number of different companies.

Francisco Assunção, 22, had a similar experience. He worked for nearly two years in three of the dozens of companies participating in the construction of COMPERJ.

Now he is trying to make a living with his motorcycle taxi, “but people prefer to walk, because they don’t have money,” he said. So he also finds casual or part-time work in the construction industry and restaurants.

“I earned more in the COMPERJ jobs,” he said. Although he was paid just 300 dollars a month, he got an additional 40 percent for food and medical assistance, he explained.

Coutinho stands out because he spent 18 months in the same job, which made it possible for him to be promoted and to earn enough to buy a car. “It was a dream, but it’s over,” he said.

Although he is focused on his musical career, he has a “Plan B”: to study accounting, although he doesn’t like math. “I have friends who are accountants,” he said.

But he is confident that “COMPERJ will resume its original plan (to build a petrochemical complex), because too much money was invested there, and they went beyond the point of no return.” An estimated 80 percent of the construction is complete. 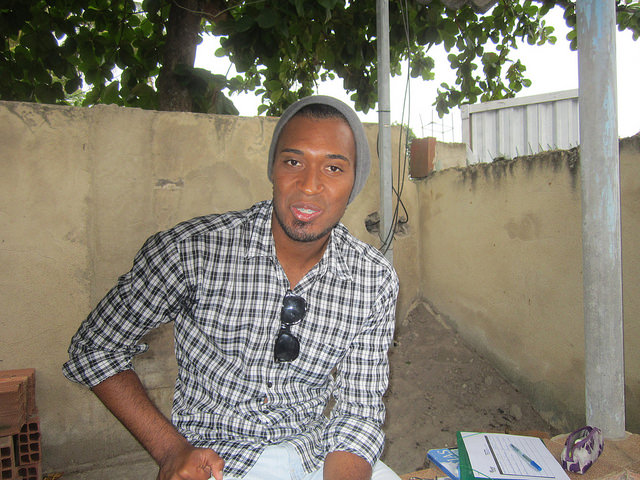 Rogerio Henrique Lourenço, 26, worked for five years on the construction of the Rio de Janeiro Petrochemical Complex (COMPERJ) in Brazil, for several different companies. Now he supports his three young children and their mother in the city of Itaborai, where the shrunken and stalled megaproject is located, with casual work. Credit: Mario Osava/IPS

For these young men, the well-paying, steady work they enjoyed for several years merely drove home the lack of opportunities in Itaboraí, a 343-year-old city of 230,000 people that has remained faithful to its origins as a town that emerged alongside a highway, which is now its long central avenue.

“This is a city that does not cultivate a cultural identity,” Franciellen Fonseca, who is studying to become a social worker and is taking part in the Incid research project, told IPS. “There are no recreational opportunities, plazas or places where locals can gather.”

The study by the Brazilian Institute of Social and Economic Analyses (IBASE) monitors compliance with citizen rights in the 14 municipalities in COMPERJ’s area of influence, based on a system of indicators that the non-governmental organisation developed.

Its most recent study, on “the invisible citizenship rights of COMPERJ workers”, stressed the difficulty of obtaining information about the situation faced by labourers working on the project.

Refusing to provide information on the workers’ conditions is “a serious rights violation, because it makes it impossible to closely monitor the effects and impacts of these megaprojects on people’s lives,” says an Incid research project report.

The number of workers on the COMPERJ construction sites has never been revealed. There was talk of 30,000 at the height of construction, in 2012-2013, and figures have varied widely since then.

The young men who were laid off and talked to IPS say local workers were a minority on the construction sites – running counter to the promise to put a priority on hiring local labour. One of the numerous strikes that brought work temporarily to a halt demanded precisely that more local workers be hired, Coutinho pointed out.

The companies argued that there was not enough skilled local labour. But when people with the necessary training appeared, the companies set impossibly high standards for prior work experience, or simply did not hire them, said Lourenço.

The “invisibility” surrounding workers at COMPERJ was broken by the frequent strikes and rioting, which the old union was unable to handle.

Its successor, the Itaboraí union of assembly and maintenance workers, emerged in June 2014 to confront a different reality: the growing wave of lay-offs.