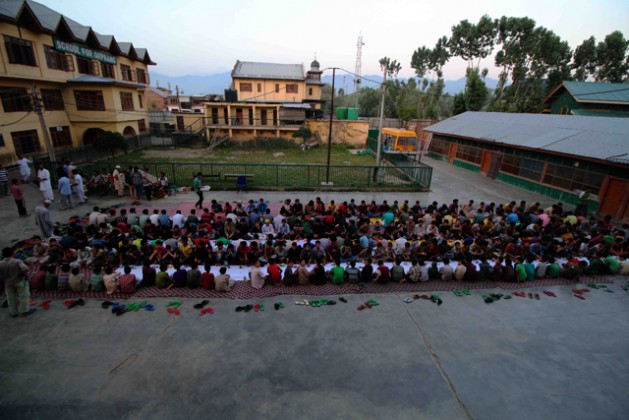 Children having meals on Sunday in one of the largest orphanage in Kashmir. Photo Credit: Umer Asif/IPS

SRINAGAR, India, Oct 30 2015 (IPS) - In a congested classroom, 13-year-old Sahil Majeed is trying to copy on his note book what his teacher is writing on a white board with black marker pen.

He was a seven-year-old when his father disappeared after being abducted by the army in Kashmir. He had to be admitted in an orphanage in Srinagar for his mother had no income to take care of her only son.

Sahil has two younger sisters and a mother who is a half widow. His voice trembles with fear and frowns become visible on his little forehead every time he recalls how his father became disappeared. “I was sleeping that night when army raided our house. They took my father along and then there came no news about him,” he said.

Sahil’s mother has been moving from pillar to post to find her missing husband but all her efforts are proving futile.

Sahil was admitted in the orphanage after his mother found it difficult to bear the costs of his studies. “I miss my little sisters. It has been three months that I haven’t seen them. I want to run away from this place but I realise where I would go then,” he said.

According to the orphanage warden, Sahil becomes aggressive at times and begins to scream loudly.

During the routine medical check up last year, doctors found signs of depression emerging in Sahil. He was diagnosed what psychiatrists called childhood depression.

Haseeb, now 12, was an eight-year-old child when he knew that his father, a militant, was killed. Hailing from north Kashmir’s Baramulla area, Haseeb was admitted in an orphanage by her mother who found difficult to bear the costs of Haseeb’s studies.

Every time Haseeb is allowed to leave the orphanage to visit his family, he refuses to return from home. “He weeps every time he returns visiting his family. We try to soothe him but he gets angry at time and starts tearing apart his books,” says Asif, another orphan.

For Haseeb, home means everything. “I want to live like other children in my locality. I want my mother every time with me,” he said.

The armed insurgency that broke out in 1989 has had a devastating affect on the normal life of people living in Kashmir. The militants demand secession from the Indian Union and pitch for Kashmir’s independence or its merger with the neighbouring Pakistan. After 1989, the Indian government abruptly increased the number of its troops in Kashmir to suppress the insurgency. The large presence of army has led to a bloody war between the two sides with very high collateral damage. So far 40,000 to 100,000 people are believed to have been killed in the ongoing violence in Kashmir.

According to a 2014 study conducted by Save the Children, a London-based charity organisation, the estimated population of orphans in Jammu and Kashmir due to conflict and natural death of parents is around 215,000, 15 per cent of whom live in orphanage homes across the territory.

The report said that 37 per cent of the orphans lost one or both parents due to conflict while 55 per cent were orphaned due to the natural death of parents and remaining eight per cent due to other reasons.

Another study conducted by the department of education in the University of Kashmir reveals that orphans between the age group of 0-6 and 6-14 live in a state of depression and dreariness.

And another study conducted by the institute of Jammu and Kashmir Affairs stated that 57.3 per cent of orphans in Kashmir have become fearful, 53.3 per cent suffer from depression while as 54.25 per cent cannot sleep properly.

Kashmir’s renowned sociologist, Professor Bashir Ahmad Dabla, surveyed 300 orphans. In his report he stated that 48 per cent of them faced economic hardships after the death of their father. More than 13 percent reported denial of love and affection while 22 per cent of them have faced psychological setback. Dabla’s efforts also showed that 86 of the 300 orphan children he surveyed received financial help from relatives, 67 from government, 36 from NGOs and 24 from other sources like neighbours and well wishers. But the rest, the single largest group of 87 orphan children, receive no help at all.

Fifteen-year-old Jameel Ahmad says an orphanage is no less than a jail for him. His father was killed five years ago in land mine blast in his village, located near the border. Army had planted the mines near the area where his father, a farmer by profession stepped in. “I miss my father. He comes in my dreams every time. I want to run away from this place and go to home,” said Jameel.

After his father’s death, Jameel’s mother found no income and dropped him in an orphanage. “Here I have friends and I play with them but I want to go home. I want to be with my mother,” without a trace of self-pity, Jameel said.

Several studies have held the role orphanages responsible for the mental illness among orphans.

Kashmir’s leading psychiatrist Dr. Arshid Hussain, says the orphanages fail to meet the emotional needs of children. “These children will be better off in their families rather than in the orphanages. However, there are a good number of children as well, who will not be fortunate enough to live even in joint or extended families. And therefore it is also not good to abolish the orphanage system. But I think we should think of the alternative structures rather than continuing with the existing orphanages,” said Hussain.

Psychiatrist Dr Mushtaq Margoob recently conducted a survey of Kashmir’s orphanages. The survey found nearly 41 per cent of the children suffer from post-traumatic stress disorder (PTSD), followed by major depressive disorder in one-quarter of the cases. “Children in Kashmir are emotionally more vulnerable. Loss of a parent exposes a child to psychological disturbances which sometimes also lead to criminal tendencies in them,” said Margoob.

He added that most common problem faced by orphans in the orphanages include a sense of loss – of home, parents and other relatives. In addition, there is high drop-out rate from schools, lack of proper health-care and there are problems with immunization, social downfall, child labour and drug abuse.

Noted child psychologist, Professor A G Madhoosh says children living in orphanages in Kashmir lack individuality and confidence. According to him, social stigma of living in an orphanage adds more to the stress faced by children who have lost their parent or parents.