PEMBA, Southern Zambia, Oct 31 2015 (IPS) - It is slightly after 10 o’clock in the morning and 48-year-old Felix Muchimba of Siamuleya village in Pemba district has just finished having breakfast – a traditional drink called Chibwantu, made of maize meal and grit. 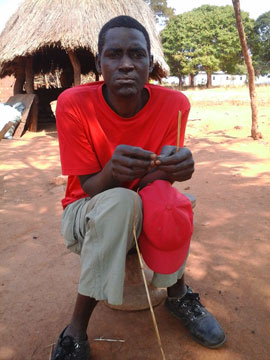 Nutritionally, the drink does not offer much except energy for the day’s work. Normally, the next meal should be one o’clock, followed by the final meal of the day taken in the evening.

However, Muchimba and his six member family will be having their next and last meal of the day at four o’clock. Because of food scarcity, the family now takes two instead of three meals per day.

“I harvested slightly over 200kgs (4 by 50kg bags) of maize and this could finish in two months if we maintain the normal three meals per day,” said Muchimba, who has been living with HIV since 2007, told IPS.

Muchimba says, “My status as a bread winner has not changed despite my living with HIV. When disaster strikes such as drought leading to crop failure, we cope with the changed situation and have reduced our meals to two per day,” he said.

Muchimba’s family is among the over 133,000 households countrywide that have suffered crop failure due to drought and now require relief food assistance, according to the country’s Disaster Management and Mitigation Unit (DMMU) 2015 Food Security Map.

“Children who are undernourished suffer from a number of short and long term consequences. It is the long term effects that we are seriously worried of; poor development of the brain, leading to poor performance in school and even reduced productivity later in life,” Eustina Besa of the National Food and Nutrition Commission told IPS.

A typical meal in Zambia is a monotonous intake of key staples: Nshima (a hard porridge made of maize or cassava starch), usually eaten with steamed vegetables (rape or pumpkin leaves) and, not so often, chicken or meat.

According to HarvestPlus, a research Program on Agriculture for Nutrition and Health (A4NH).

maize – a staple food for more than 1 billion people in sub-Saharan Africa and Latin America – lacks essential micronutrients such as vitamin A. This common deficiency in the diets of poor malnourished populations leads to retarded growth, increased risk of disease and reproductive disorders.

With this background, Muchimba’s family is likely part of the larger world population still grappling with “silent hunger” – malnourishment that is serious enough to affect personal growth and development.

According to the World Food Programme’s 2015 statistics, some 795 million people worldwidee world do not have enough food to lead a healthy active life with sub-Saharan Africa recording the highest prevalence (percentage of population) of hunger. One person in four on the continent is said to be undernourished.

Zeroing in on Zambia, the picture is not different. According to the 2014 UN Food and Agricultural Organisation (FAO) State of the Food Insecurity in the World report, the country was ranked second to the world’s worst case scenario in terms of undernourishment, rated at 48.3 per cent of the country’s population, better only than Haiti with 51.8 per cent.

However, with several multi-sectoral measures such as the First 1000 Most Critical Days campaign launched in 2012, the 2015 Zambia Demographic Health survey has shown some improvement.

“The survey has revealed that stunting has reduced to 40 from 45 per cent”, Eneya Phiri, Head of Advocacy and Communications at the Civil Society Organisation for Scaling-Up Nutrition, told IPS.

Phiri added that “The First 1000 Most Critical Days programme has brought about a coordinated approach to the fight against under nutrition especially that the inter-ministerial committee is chaired by the Secretary to the Cabinet.”

But even with such progress, stakeholders are getting concerned with the frequency of climate induced disasters such as drought that have a direct bearing on both food availability and good nutrition.

“We are still concerned that climate change could reverse these gains. We are afraid for rural communities affected by drought for they may not be getting the right nutritional balance as a result of reduced meals which is usually their easy way out in difficult times,” said Phiri.

Eustina Besa, Head of Communications at the National Food and Nutrition Commission (NFNC), says the programme has a set of priority interventions, also known as the minimum package, that aims to raise awareness of under-nutrition, increase demand for optimal nutrition and hold government leaders accountable.

In linking drought to nutrition, there is an emerging argument that climate-smart agriculture practices, such as crop diversification and planting drought tolerant crops, must be accompanied with nutrition smart technologies.

According to the Global Panel on Agriculture and Food Systems for Nutrition, an independent group of influential experts with a commitment to tackling global challenges in food and nutrition security, the regions of the world facing the prospect of the most serious impacts of climate change are sub-Saharan Africa and South Asia which already have the highest burden of malnutrition and where the poor rely heavily on agriculture for their livelihoods.

John Kufor, former President of Ghana and co-Chair of the Global Panel, believes the challenges of malnutrition and climate change come together as an opportunity in agriculture by integrating nutrition into climate-smart agricultural practices.

And HarvestPlus seems to have embraced this model by using conventional crop breeding techniques to develop five new Vitamin A-rich varieties of maize in Zambia.

The varieties produce orange coloured maize cobs, and in farmer trials they have been found to produce yields similar to hybrid white maize varieties.

And backing the climate and nutrition smart approach, Emely Banda, the Programme’s Demand Creation Specialist, told IPS: “Our varieties were bred for drought resistance owing to challenges of unpredictable and erratic rainfall to tackle both food and nutrition security.”