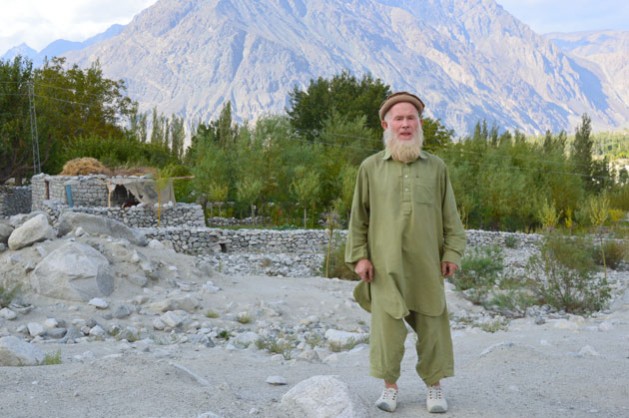 Standing over what was once his fertile field of maize and potato and fruit trees, Ishaq Khan,68, shares about how a single devastating flash flood in 2010, which washed away his home, crops and fruit orchards in just one night, plunging him into a vicious cycle of poverty and hunger. Credit: Saleem Shaikh/IPS

Ghizer, Pakistan, Nov 10 2015 (IPS) - Ishaq Khan shivers as he recounts an unfortunate flash flood in 2010, which covered his maize and potato crop with mud and washed away over a dozen fruit trees he planted 45 years ago.

Though the 68-year-old farmer has managed to rebuild his home now in one year’s time with local earthen and wooden material, he lacks resources to be able to restore his two-acre fertile field now under the mud and heavy boulders washed down by the devastating flash flood in Damaas valley of Gilgit-Baltistan region’s scenic Ghizer district, Pakistan’s north.

“It was late midnight, August 6th in 2010 when sky was heavily overcast with roaring black clouds, which triggered heavy rains non-stop for several hours. While it was raining, we saw a roaring flash flood coming down a mountain so fast that we were only able to save our lives by fleeing to a higher ground,” the father of six children said.

“I was piercing my nails into my scalp and weeping helplessly out of grief while the flash flood destroyed my home. As many as 13 fruit trees and my near-harvest maize and potato crop were buried by the mud brought down the mountain by the gushing water,” he added.

Ishaq Khan cried as he told of the massive damage amounting to over 14,000 dollars in just one hour.

Now farmer-turned-herdsman Ishaq said he used to harvest 800 kilograms of almonds, 2,000 kilograms of walnuts and grapes every year and sells them in a local market in Gahkuch, in the Ghizer district.

Locals say floods are extremely rare in the area. But the region has suffered three since 2010.

“The Damaas area didn’t witness any flood during last 200 years. But, it suffered flash floods in 2006, 2010 and 2015. This is really surprising for us,” said Musa Khan, a local weather man of the Pakistan Meteorological Department, who has been recording weather for the last 10 years.

Retired military men Muhammad Saleem, 63, said that all of 25 farming families displaced by the 2010 flood are still in tents and many of them often sleep hungry.

Agricultural activity has come to a complete halt as entire farms lie under the mud. The farmers lack funding to restore their fields.

Those with money have moved to Gilgit, Chilas, Mansehra and Islamabad cities and tried to rebuild their lives in the urban centres.

“Where do we poor go since we have no money?” asks Saleem. “We have no choice but to live in tents in pathetic conditions, often without food and potable water,” he said.

Masoom Shah lived in picturesque Darkut valley, some 103 miles from Gilgit, the capital of the Gilgit-Baltistan region.

“I had my own wood carving factory in Darkut, where I had seven labourers employed at my factory. But now I have been reduced to doing labour at the wood carving factory in Gilgit city after I lost my factory and house to the 2010 flood, which destroyed our fruit orchards, standing maize crop in Darkut,” Shah said. He suffered economic damages of 21,000 dollars, lost in just one night’s flood.

“Having lost their belongings and livelihoods to the floods, over 100 families of the Darkut valley have migrated to Ghakuch and Gilgit cities in search of livelihoods,” said Babar Khan, Gilgit-based mountain conservationist and disaster risk reduction expert at the World Wide Fund for Nature – Pakistan (WWF – P).

Khan told IPS that in recent years climate change-induced migration from remote mountain valleys to nearby by urban centres like Gilgit has emerged as a serious problem in the Gilgit-Baltistan region, which is home to over four thousands glaciers.

There are “increasing incidents of flash floods in summer months, which occur when rising summer temperatures speed up melting process of the glaciers, have become a growing threat and key cause of rise in migration, ” said Khan.

At present, there is no data available about the climate change-induced displacement of mountain communities caused due to hydro-meteorological natural disasters, which include flash floods, avalanches, landslides, rock-falls, soil-erosion, river-erosion and torrential rains.

“Absence of such data is a main roadblock to managing the climate change-induced migration in the region, which is aggravating with each passing day as frequency and intensity grow in hydro-meteorological natural disasters,” concedes Shahzad Shigri, the Environmental Protection Agency’s Director of Gilgit-Baltistan.

As mountain valleys surrounded by overlooking snow-capped mountain peaks in the northern parts of the country are gradually warming up, weather patterns are fast shifting and becoming increasingly erratic, says Ghulam Rasul, chief weather scientist and glaciologist at the Pakistan Meteorological Department (PMD).

“This has led to a rise in glacial melt even during winter months and many valleys areas like Damaas, Darkut, Yasin in Gizer district are witnessing rainfalls during snowfall months,” he said.

He suggested that diversifying agro-based rural economies in the mountain valleys is one effective way for the farming communities to adapt to the shifting weather patterns and climate risks including floods.

The programme would benefit at least 100,000 rural families in the Gilgit-Baltistan region, where over 90 per cent of the mountain communities eke out their livelihoods from climate-vulnerable agriculture.

IFAD has agreed to extend 67 million dollars to finance the Economic Transformation Initiative in the Gilgit-Baltistan region. The Pakistani government will co-finance with 23.63 million dollars and lead the programme, said Ahsan Iqbal, Pakistan’s Federal Planning and Development Minister.